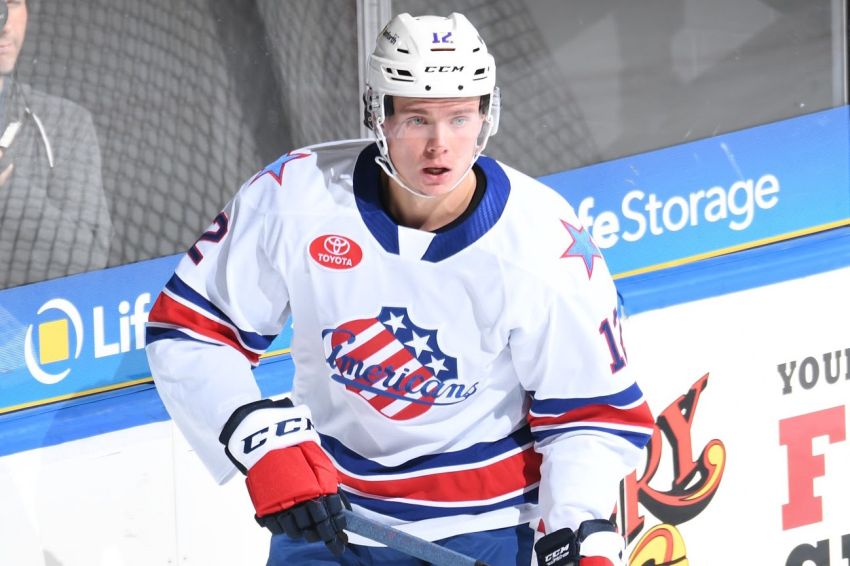 Victor Olofsson will be back soon. ©2019, Micheline Veluvolu, Rochester Americans

BUFFALO – In what are almost certainly paper transactions, the Sabres sent winger Victor Olofsson and defenseman Henri Jokiharju to the Rochester Americans this afternoon.

The moves will help the Sabres get under the NHL’s $81.5 million salary cap before today’s 5 p.m. regular-season roster deadline.

Expect Olofsson and Jokiharju to return before Thursday’s season opener against the Pittsburgh Penguins.

Coach Ralph Krueger said earlier the 22 players on the ice this morning would comprise the Sabres’ opening-night roster.

Fresh off a 30-goal season in the AHL, Olofsson, 24, enjoyed a terrific training camp and secured a roster spot. The Swede practiced on the first line today beside center Jack Eichel and Sam Reinhart.

The Sabres went over the cap when they re-signed defenseman Jake McCabe and goalie Linus Ullmark on Aug. 4, according to capfriendly.com.

Right now, they have $83,722,024 in salary committed for this season, according to capfriendly.com.