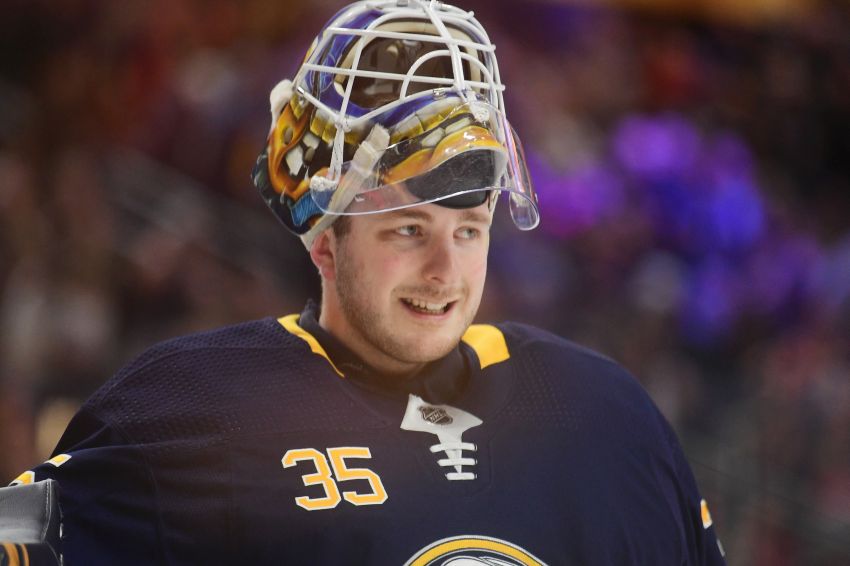 BUFFALO – The Sabres have gone over the NHL’s $81.5 million salary cap, according to capfriendly.com.

It appears re-signing goalie Linus Ullmark to a one-year, $1.325 million contract Saturday put them over. But it had been expected the Sabres would exceed the cap as they inked their restricted free agents.

Earlier Saturday, the Sabres avoided arbitration with Jake McCabe, re-signing the defenseman to a two-year, $5.7 million contract. McCabe’s hearing was scheduled for today.

McCabe’s deal left the Sabres with $265,476 of cap space, according to capfriendly.com.

Ullmark had his arbitration hearing Friday. The Sabres and the Swede, however, did not wait for the independent arbitrator to make an award.

The Sabres have until the start of the upcoming season to get under the cap. Still, a move could materialize in the coming days.

Any player bought out must make at least $3,455,438, according to capfriendly.com. So who could the Sabres look at to shed salary?

Forward Vladimir Sobotka, who has one year and $3.5 million left on his contract, would likely be the leading candidate. Sobotka, 32, struggled mightily last season, his first with the Sabres.

Oft-injured defenseman Zach Bogosian has one year and $5,142,857 remaining on his deal. Bogosian, 29, has been as asset when he’s healthy. But injuries have ravaged the Massena native.

Bogosian underwent hip surgery in April and needs five to six months to recover. He had surgery on his other hip in 2018.

Ullmark, 26, will be an unrestricted free agent when his contract expires next year.

He asked for $2.65 million in arbitration, according to Sportsnet’s Elliott Friedman. The Sabres, meanwhile, countered with $800,000.

On Jan. 4, Ullmark made 35 saves in a 4-3 win over the Florida Panthers, improving to 9-1-3. Fourteen appearances into the season, he boasted a 2.73 goals-against average and a .922 save percentage.

Then the backup started struggling. In his final 23 contests, he went 6-13-2 with a bloated 3.36 goals-against average and an .892 save percentage.

Meanwhile, McCabe wanted $4.3 million in arbitration, while the Sabres countered with $1.95 million, according to Friedman.

McCabe, 25, earned $1.775 million last season. He will be an unrestricted free agent when the deal expires.

McCabe averaged 18 minutes, 57 seconds of ice time an outing last season, the seventh-highest total among Sabres. He topped more than 19 minutes a game in each of the previous three campaigns.