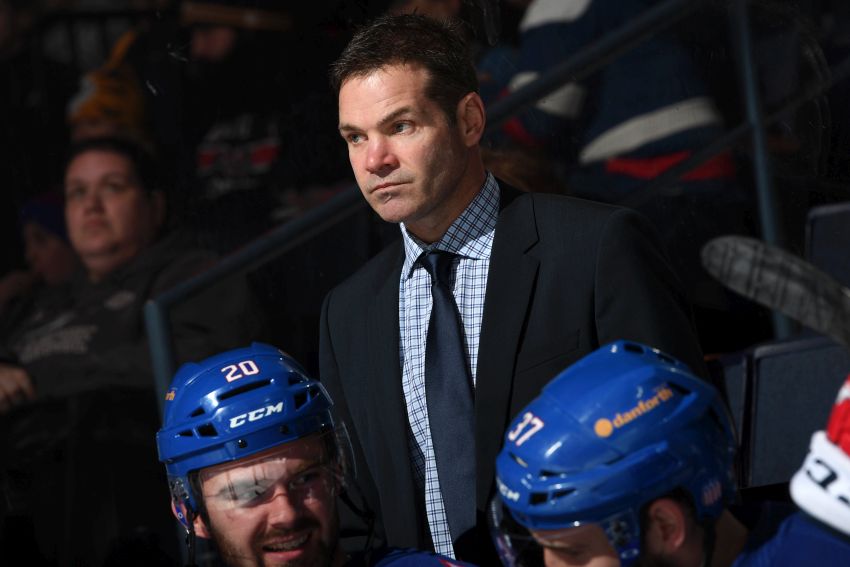 BUFFALO – Having just spent most of training camp with the Sabres, coach Ralph Krueger expects Chris Taylor to transition to the NHL smoothly.

Granato, 52, will be taking a medical leave from the Sabres.

“The curve is in the right direction,” Krueger said of Granato’s health following today’s practice inside KeyBank Center. “We’re optimistic that he will recover fully from this setback. He’s in very good medical hands.”

Krueger said Taylor, 47, possesses a strong understanding of what the Sabres want to do.

Many believe Taylor, a former Amerks star who played with the Sabres, will eventually earn a full-time promotion to the NHL, perhaps as a head coach. He has coached the Amerks the last two seasons, leading the AHL club to two playoff appearances.

“We’ve had wonderful debates, Chris Taylor and I, through these last six weeks especially,” Krueger said. “I just enjoy continuing those. He … knows some of these players very well from them having gone through the process of working through Rochester into the National Hockey League.

“So on multiple levels he’s an easy guy to slip in here.”

Krueger hired Granato, someone he has called a “lifer” coach, in June. Granato has NHL experience with the Chicago Blackhawks and St. Louis Blues and has also coached in the AHL, ECHL NCAA and junior.

Granato worked beside Krueger during the preseason games, so Taylor will likely coach from the bench.

The Sabres open their season Thursday on the road against the Pittsburgh Penguins. The Amerks, meanwhile, start Friday at home against the Syracuse Crunch.

Krueger said the 22 players on the ice today would comprise the Sabres’ opening-night roster.

The Sabres sent all four players they waived Monday – forwards Remi Elie, Curtis Lazar and Scott Wilson and defenseman Casey Nelson – to the Amerks today after they cleared.

In injury news, Krueger said defenseman Brandon Montour (hand) is skating but “still a few weeks away from actually joining any type of contact.”

The Sabres have no timetable for Bogosian, who’s doing off-ice work.

“We’re being extremely careful,” Krueger said. “He’s in good hands working hard but still a ways away from being in any practice.”