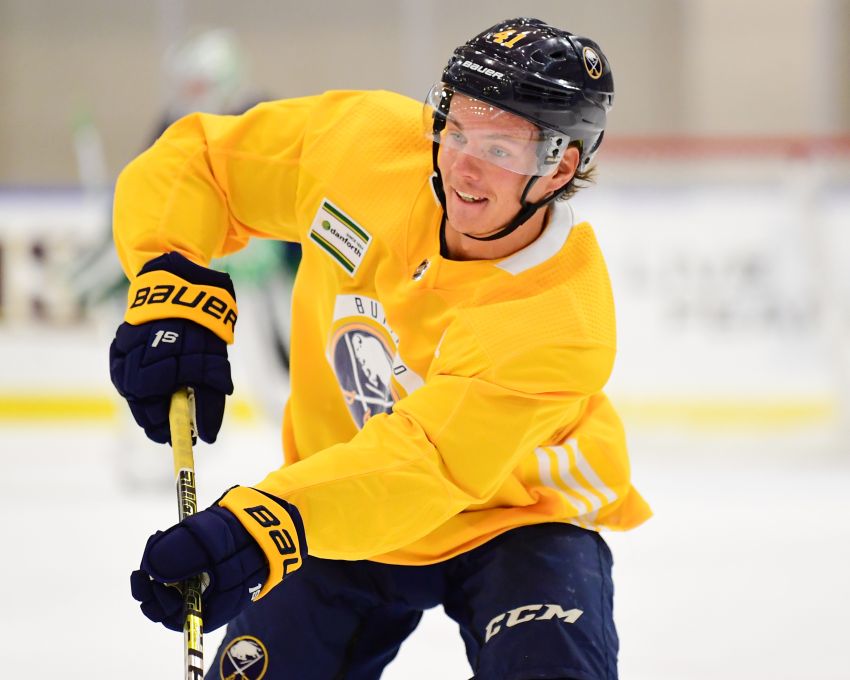 BUFFALO – A splendid rookie season in which winger Victor Olofsson scored 30 goals in the AHL and earned a promotion to the Sabres raised expectations this year.

How many former seventh-round picks are expected to not only secure an NHL roster spot after one year, but also contribute offense on a scoring line? Not many.

By the wintertime, it appeared a prospect the Sabres selected 181st overall in 2014 could have a future in Buffalo. When they recalled Olofsson in late March, he responded by scoring two goals and four points in six outings.

Olofsson went into the offseason brimming with confidence.

Still, Olofsson, whose lethal shot is perhaps his best asset, understands he hasn’t locked anything up.

The Sabres have a surfeit of forwards, especially left wingers. A whopping eight are listed on the roster. Olofsson has a fierce battle ahead to crack the lineup.

“It helped me a lot to get those games last year heading into this year,” Olofsson said Thursday following the first session of rookie camp inside Harborcenter. “I feel like I’ve got to fight for my spot. There’s tough competition. There are a lot of bodies here.”

Olofsson can start making his case for one of the 13 or 14 forward spots tonight against the New Jersey Devils in the Prospects Challenge opener.

The four-team tournament features youngsters of varying skill levels. Some have already played in the NHL, while others will never sniff the big leagues.

Given his age and track record of scoring in high-level pro leagues – he led the SHL in goals two years ago – Olofsson could be a dynamic presence during the three-games.

Naturally, Olofsson said he feels more comfortable today than he did a year ago, when he was still a relative unknown.

“I kind of know the way we want to play, even if it’s a little bit different this year,” he said. “I still feel like it’s a lot easier coming into this year because last year everything was new to me.”

The grind of North American hockey was new to Olofsson. In the SHL, he never played more than 51 regular-season games. In 2018-19, he played 66 contests with the Amerks before his stint with the Sabres and the AHL playoffs.

“I didn’t really feel it while we were playing but I definitely felt it after the season,” Olofsson said. “I had to take a little bit of extra time off. But once you’re in that bubble, it goes by really fast.”

In compiling 63 points with the Amerks, Olofsson showcased some remarkable consistency, never going more than four games without a point.

Amerks coach Chris Taylor said Olofsson’s willingness to be coached helped him adjust to a new style of hockey and evolve.

“He acknowledges his things he needs to work on and he worked on them hard,” Taylor said. “His work ethic was superior and that’s why he kept on getting better and that’s why I kept on using him in penalty killing at the end, because of his hockey smarts. He really wanted to kill and get extra ice time and he deserved it.

“He’s one of those guys who just wanted to be on the ice and be that guy in every different situation. When you’re that coachable, it’s easy to improve.”