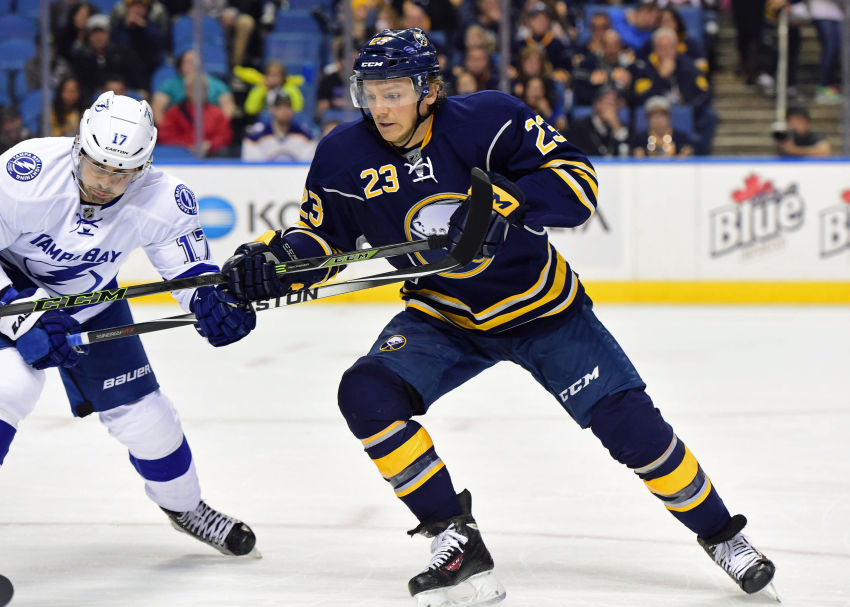 Sam Reinhart has been a strong presence for the Sabres. ©2015, Dan Hickling, Olean Times Herald

BUFFALO – The plays have mostly been subtle, devoid of the flash one might expect from a former second overall pick.

While quietly morphing into one of the Sabres’ top offensive threats, rookie winger Sam Reinhart, 19, has been showcasing the intelligence that makes him a coveted prospect.

“No one would ever question his intelligence and his ability to make a play and have that good hockey sense,” Sabres coach Dan Bylsma said Tuesday inside the First Niagara Center. “He’s shown it.”

That’s why Reinhart should start tonight’s home tilt against the Toronto Maple Leafs as the left winger on the Sabres’ No. 1 line beside center Ryan O’Reilly and Tyler Ennis.

“Really smart,” O’Reilly said about Reinhart. “You can just tell he reads the game well. Where you think he’s going to be, he ends up there. He’s just got a vision for the game that most guys don’t have.”

Reinhart enjoyed his best NHL outing Saturday in the Sabres’ 2-1 loss in Tampa Bay, scoring his first goal in his 14th appearance and narrowly missing at least two other prime chances while skating a career-high 15 minutes, 43 seconds.

“He’s got a lot of sneaky talent,” Ennis said.

The Sabres have only nine goals through five games, and Bylsma said Reinhart, who has two points, is responsible for three of them because “he’s been our best guy at the net front.”

Reinhart created Nick Deslauriers’ goal Oct. 10 by feeding him from down low and hustling to the crease. He screened Florida Panthers goalie Roberto Luongo on Ennis’ power-play goal Thursday.

“They don’t go in if he’s not there,” Bylsma said. “So … pretty much in every game he’s played he’s made a play, given us an opportunity to score a goal.”

Reinhart’s effectiveness in front of the goalie, a spot he had rarely been positioned at as a playmaker, has been surprising. Why is a neophyte who’s 6-foot-1 and 189 pounds so good in the ice’s grittiest area?

“You don’t need to be good to get in front of the goalie’s eyes,” Reinhart said. “A lot of it’s about positioning. I haven’t played there too much, but I’ve always liked the position. I think it’s a lot more than screening the goalie. … You can still make a lot of plays.”

O’Reilly added: “He’s a great skill set, his hands. I think anything that comes there, he knows where it is. Anything that drops he can get out of his feet well, he can make a play with it.”

With a glut of centers, Bylsma moved Reinhart from center to the wing last month, and an impressive preseason – he had a three-assist outing – helped him earn a roster spot instead of going to the AHL, a league he’s allowed to play regularly in this season because he turns 20 years old Nov. 6.

So far, Reinhart has skated on several lines with ice time mostly in the 10-12 minute range. Bylsma loves using forward pairs – one center and one winger – while frequently changing a piece. Still, he said Reinhart could keep skating beside O’Reilly and Ennis.

Against the Lightning, Reinhart created a scoring opportunity for Ennis by bouncing the puck off the end boards during a rush.

“If he’s on that line, they get seven scoring chances again (like Saturday), we’ll see him continue to play on that line,” Bylsma said.

A year ago, in the midst of his forgettable nine-game NHL trial, Reinhart looked overmatched. He has used the last 11 months to build his game and his body.

“Part of the confidence that I’ve been able to gain, especially since the season started, has been knowing the work that I’ve put in not just this summer, but this whole past year,” Reinhart said. “So I’m happy with the progress.”

Bylsma on what he’s been told about the Sabres’ rivalry with Toronto: “If you win four games, just win these four. That’s what I’ve heard and that’s what I’ve been told by fans going down the street.”