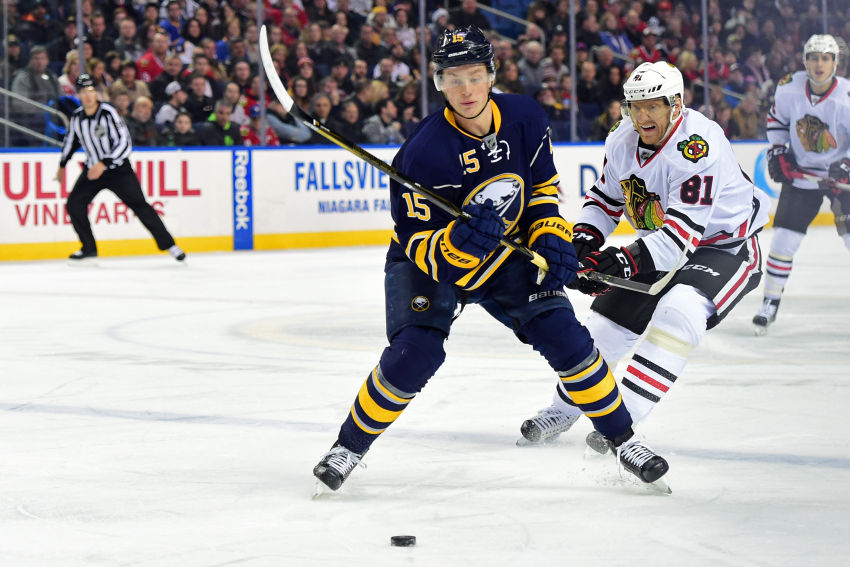 BUFFALO – Sabres rookie Jack Eichel has played big games in his hometown rink, Boston’s TD Garden, before. As a college freshman last season, the center starred as his Boston University Terriers captured The Beanpot, a prestigious tournament between local schools.

Google “Eichel” and “Beanpot” and a slew of pictures of an ecstatic Eichel clutching the Beanpot trophy will pop up.

But tonight’s tilt against the Bruins, Eichel’s first appearance in Boston with the Sabres, will be a much different experience for the 19-year-old. It is, after all, an NHL contest.

“That’s kind of something I’ve always dreamed of, going back there in front of family and friends,” Eichel said Sunday inside HarborCenter before the Sabres started a five-day Christmas break.

Eichel has occasionally found himself “a little bit in awe” of opponents like Sidney Crosby, Jaromir Jagr and Alex Ovechkin throughout his first three months in the NHL.

“But you’re a part of the league now, too,” Eichel said. “You’ve worked (to get) there. I can’t think about it too much because sometimes you get in awe and you start staring, and then they’re on you and they score a goal.”

Still, what will Eichel think when he sees Bruins defenseman Zdeno Chara on the ice?

Eichel used this week to recharge from the rigors of his first NHL season. He returned home to North Chelmsford, Mass., for the first time since the summer. He plans to meet his teammates at the rink this morning.

“Everyone wants to talk about how many games you’re playing and stuff,” Eichel said. “I think it’s a lot, but I don’t have much to worry about other than playing hockey, so I don’t want to make any excuses I’ve been playing a lot of games or whatever.

“Yeah, it’s a good break for all of us. I think it’ll be good for us to rejuvenate mentally and physically and attack the rest of the year.”

Sabres coach Dan Bylsma has leaned on Eichel heavily, skating him 19 minutes, two seconds an outing. Eichel has hasn’t scored a goal in seven games, although he has two assists in the last two games. Overall, he has nine goals and 16 points.

“It’s a break for everybody, and one that is needed, and I think Jack in particular,” he said. “I do think his last two games have been more engaged. …But he needs a break to get refreshed, refocused and use the time to reenergize. He’s going to get a chance to come back and put a show on in Boston for his hometown.”