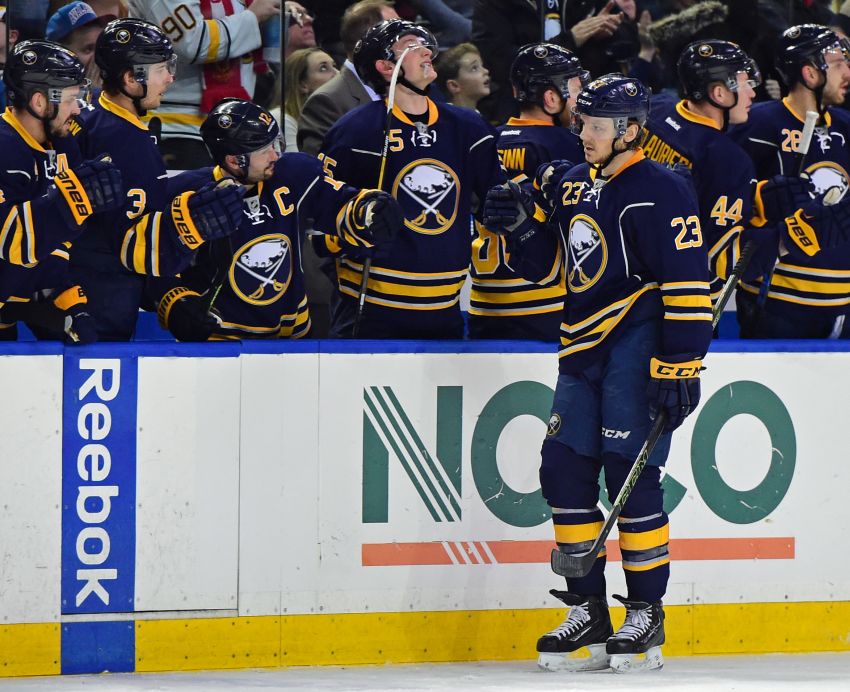 BUFFALO – Many days, long after most of their Sabres teammates have finished practicing, center Ryan O’Reilly and winger Sam Reinhart stay on the ice and work on tip drills.

O’Reilly, an adroit passer, has probably fed Reinhart thousands of pucks this season, helping the rookie quickly morph into a supreme net-front presence.

The chemistry they’ve quickly developed was on display 17:14 into the Sabres’ 4-1 win Sunday afternoon against the Colorado Avalanche, when Reinhart redirected O’Reilly’s long slap pass from the point in front of goalie Calvin Pickard, his 17th goal and fifth in the last five games.

“I saw a guy going there,” O’Reilly said inside the First Niagara Center. “It’s kind of funny, we practice that a lot, and I just kind of tried to put it in an area for him. It was a great tip by him.”

That area has become Reinhart’s most dangerous spot on the ice.

The goal put Reinhart into a three-way tie with O’Reilly and rookie Jack Eichel, who opened the scoring, for the team lead. The Sabres haven’t had two rookies score 20 goals since Danny Gare and Peter McNabb in 1974-75.

Given their current paces – 25 games are left – the last two second overall picks could both hit the mark.

“That would be nice,” Reinhart said. “We’re all just trying to chip in when we can. We all play different games and want the same end result.”

O’Reilly believes the rookies “push each other.” Reinhart, he said, keeps developing confidence.

“He’s grown his game every time he hits the ice,” O’Reilly said. “He’s a phenomenal player.”

While O’Reilly hasn’t scored since Jan. 8, a 16-game stretch, he had two assists Sunday and has nine in the last seven games.

Like many junior stars, Bailey didn’t score much early in his first AHL season with the Rochester Americans. But the Williamsville native caught fire prior to his recall Wednesday, compiling four goals and six points in three games. Overall, he has 10 goals and 23 points in 47 AHL contests.

What has been the 6-foot-3, 210-pound Bailey’s biggest adjustment to professional hockey?

“I always play fast,” he said. “I’m a big, strong guy. So speed really hasn’t been an issue. I think it’s more decision making for me. I think when I got to Rochester, it was kind of similar to here, I didn’t know how much time I had.

Mike Yeo, Bylsma’s assistant with the Pittsburgh Penguins for two seasons, including their 2008-09 Stanley Cup campaign, was fired as coach of the reeling Minnesota Wild on Saturday after its eighth straight loss and 13th setback in the last 14 outings.

Some terrible play from former Sabres wingers Jason Pominville, 33, and Thomas Vanek, 32, has greatly contributed to the Wild’s demise.

Pominville, two years removed from his third 30-goal season, has only six goals and 21 points in 55 games. Vanek, meanwhile, was recently a healthy scratch.

The Sabres made one change on defense, inserting Mark Pysyk, who was scratched for Friday’s 6-4 win against Montreal, for Carlo Colaiacovo. Pysyk played his 100th NHL game.

Zemgus Girgensons also returned after a lower-body injury shelved him three games. Girgensons, a winger most of this season, played center between Marcus Foligno and Brian Gionta.