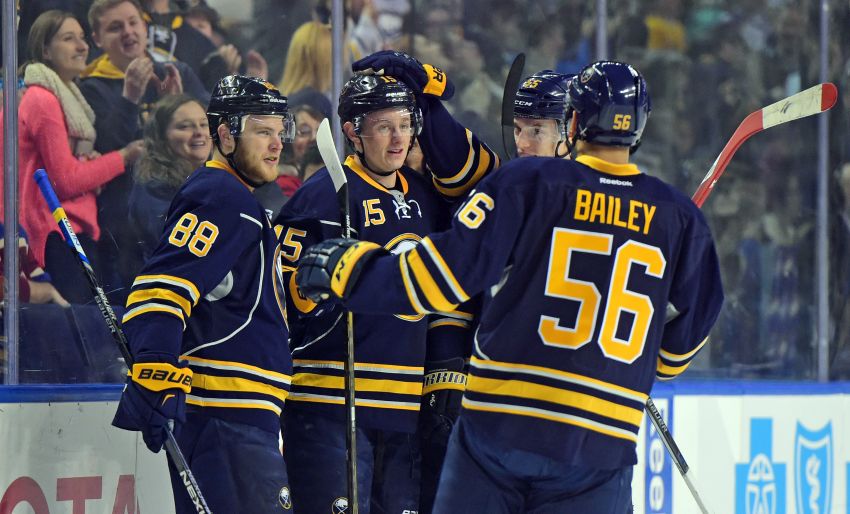 BUFFALO – Just like that, for one of the few times this season, the Sabres seized full control of a game early in Sunday afternoon’s 4-1 win against the Colorado Avalanche.

By the 4:42 mark, Avs goalie Semyon Varlamov was on the bench, a lethal Jack Eichel shot and a flubbed 50-footer from Evander Kane his undoing.

Varlamov didn’t even make one save inside the First Niagara Center. Yikes.

Then, as they often do, the Sabres went into a shell following Sam Reinhart’s goal later in the period. The Avs buzzed around goalie Robin Lehner for about 40 minutes.

“It was really similar to the game in Colorado,” Sabres coach Dan Bylsma said.

Clearly, that loss – “One that left a mark,” Bylsma said prior to the game – still stung.

“I think we deserved a better outcome in that game,” Foligno said.

The Sabres closed just their 11th home win thanks to Lehner, who bounced back nicely after two shaky outings, and some superb penalty killing.

“(He just) gives you the confidence he’s not going to give one up,” Bylsma said.

The Sabres had killed off exactly half of Girgensons’ call when Gorges was whistled at 5:49.

“Got to credit Lenny, stood on his head again, was the key to the penalty (kill),” Sabres center Ryan O’Reilly said. “When we have him back there playing like that and the confidence, we know that if we take away the one-timers, take away the dangerous plays, he’s going to make the save.”

Lehner made 13 of his 34 saves in the third period, including a nifty toe stop late.

“Pretty much for the 40 minutes of the game and a couple shifts in the first period, they had some shifts where we were under siege in the offensive zone,” Bylsma said. “He had to come up big numerous times.”

“He made a big statement today (in) the way he came back after two tough games that he probably would like to have back,” Foligno said.

Lehner added: “I felt good. I felt good for quite some time.”

The Sabres have won two straight home games for the first time since Nov. 27-Dec. 12, when they reeled off three straight wins. They were, however, just 2-8-2 since then before Friday’s 6-4 win against Montreal.

“We want this to be a hard place to play,” Bylsma said. “That’s going to be our focus over the next nine or 10 more home games here.”

If they can keep jumping on opponents, Bylsma might get his wish. Eichel’s goal just 2:02 into the contest – a laser between Varlamov’s legs – set an early tone before the capacity crowd of 19,070 fans. Eichel skated all the way from his own zone into the left circle before unleashing his wicked shot.

“I’d like to see him continue to do it,” Bylsma said about Eichel shooting. “He’s had better opportunities to score on than that … but that’s a great example of what he can do and attack on his speed there and being an aggressive shooter.

“It’s a not a great angle, but he gets a shooting lane, goes five-hole on the defender and squeaks it through the goalie. It’s a pretty vicious shot he’s taking – the hard, heavy wrist shot.”

Kane’s goal would’ve been stopped by most high school goalies.

“We might’ve took advantage of a sleepy goaltender there,” Foligno said.