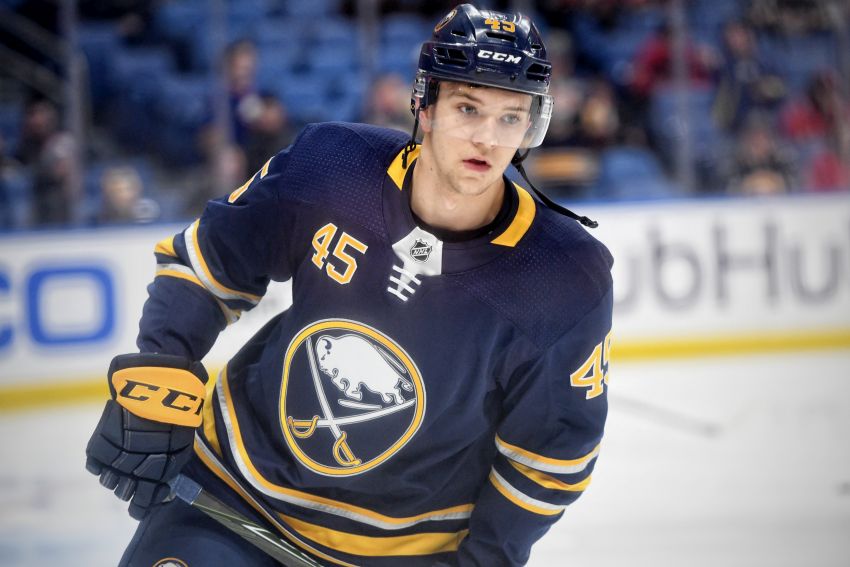 “He had a little bit of a rough start in a big game, in a big atmosphere,” Sabres coach Phil Housley said this morning inside KeyBank Center. “But as the game wore on, I thought he got more comfortable. I think he’s getting more comfortable as he’s playing his game, which is being good defensively.”

Well, playing sound defensively and slickly moving the puck. The speedy Guhle, 20, offers the Sabres an element they sorely need when he joins the rush.

“When he attacks the game with speed, he adds to our offense,” Housley said. “I’d like to see more of that. I’d like to see him be sharp early. I think he tries to ease into games a bit. I’d like to have him start the way he is through the middle portion of the game. But I like his development, I like his progression.”

Guhle, the Sabres’ top defense prospect, will hit the 10-game mark in the NHL tonight. Like any rookie, Guhle’s still raw. But to Housley, the youngster’s growth this season – he has played 47 AHL contests with the Rochester Americans – has been noticeable.

“He’s making better decisions when to jump in, fill a hole or come from behind,” Housley said. “His decision process has gotten a lot better. (Assistant coach) Gord Dineen down there has done a terrific job. But we want him to add. Let’s utilize his speed, maybe it’s leading a rush.”

Guhle said the Sabres haven’t said much to him about moving up in the play.

“I have to be smart about it, I’m not going to be reckless,” he said. “But I haven’t done anything wrong so far so I’m just going to keep going where I see a chance.”

In other news, Sabres goalie Robin Lehner will start tonight, his 51st appearance. Toronto backup Curtis McElhinney will oppose him. Starter Frederik Andersen suffered an upper-body injury in Wednesday’s 6-5 shootout win over Dallas. They also recalled Garret Sparks, one of the AHL’s best goalies, this morning.

Sabres goalie Linus Ullmark, who was summoned Tuesday, is still tending to a personal matter and didn’t skate this morning. Neither did defenseman Marco Scandella, who had a maintenance morning. Housley said Scandella will play tonight.

The Sabres will make one change on defense, inserting Victor Antipin for Josh Gorges.