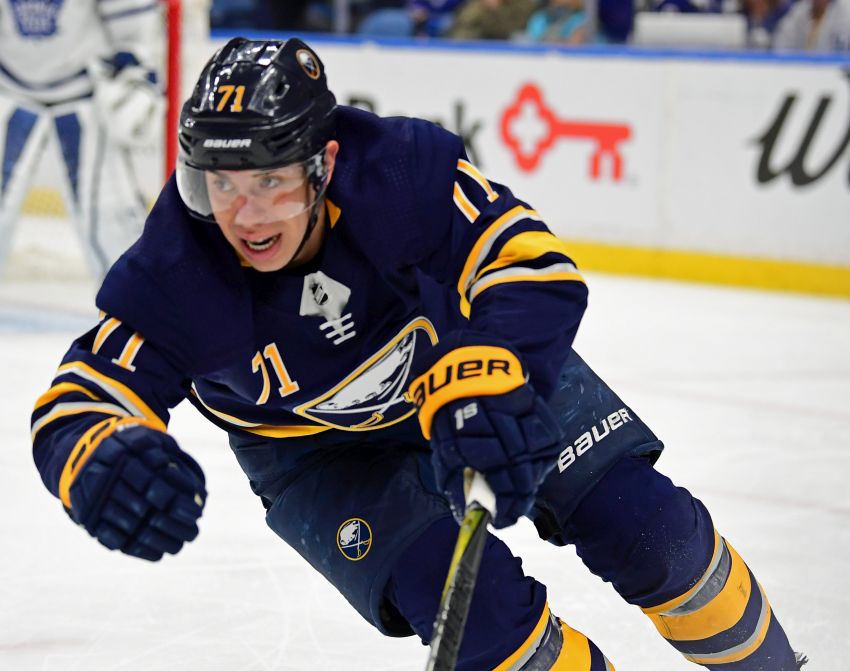 BUFFALO – Before Evan Rodrigues suffered an upper-body injury Feb. 28, the Sabres forward was playing perhaps the best hockey of his three-year career.

Less than a month after sitting out as a healthy scratch, he seemed to be putting everything together, showcasing speed, tenacity and the shot mentality Sabres coach Phil Housley constantly stresses.

In his last appearance prior to returning for Thursday’s 5-2 loss to the Toronto Maple Leafs, Rodrigues scored and pumped five shots on goal, tying his career high, in a 2-1 overtime win in Tampa Bay.

“I was feeling good, feeling confident, I was put in a lot of good situations to succeed,” Rodrigues said. “My linemates were playing great at the same time, so I think (we’re) just starting to click. I felt like every time I was on the ice I wanted the puck on my stick and I wanted to be the guy to make a play.”

Housley said Rodrigues is at his best “when he plays with urgency,” which he did immediately after the Sabres recalled him in December.

“He was skating, he was using his speed, he had good playmaking ability and he was going to some tough areas,” Housley said. “You could see that against St. Louis.”

Rodrigues enjoyed his first two-goal outing in a 3-2 overtime loss Dec. 10 in St. Louis. But the Boston University product eventually tailed off and was scratched twice.

He responded following his last benching, however, compiling four goals and nine points in 11 games before getting injured. He had 11 shots in his last three contests.

“You can see when he does shoot the puck, he gets results,” Housley said. “I wish he would do it more often, especially on the power play, getting pucks to the net. I just like Evan’s game, he’s just played a good two-way, solid game for us. Defensively, he’s done a better job and (he’s done well) in the faceoff circle.”

Rodrigues took more faceoffs Thursday because he played center between Zemgus Girgensons and Nick Baptiste. Rodrigues has switched between the middle and the wing all season, having some success at both spots. He started playing center again when Jack Eichel suffered a high right ankle sprain Feb 10.

“Both positions have their perks,” said Rodrigues, who had two assists Thursday. “I think center you get to play with the puck a little more, you’re usually the guy breaking out of the zone. But when you’re playing wing, you get to be a little bit more creative and (have) a little bit more time and space.”

“He had a little bit of a rough start in a big game, in a big atmosphere,” Housley said. “But as the game wore on, I thought he got more comfortable. I think he’s getting more comfortable as he’s playing his game, which is being good defensively.”

Well, playing sound defensively and slickly moving the puck. The speedy Guhle, 20, offers the Sabres an element they sorely need when he joins the rush.

“When he attacks the game with speed, he adds to our offense,” Housley said. “I’d like to see more of that. I’d like to see him be sharp early. I think he tries to ease into games a bit. I’d like to have him start the way he is through the middle portion of the game. But I like his development, I like his progression.”

Guhle, the Sabres’ top defense prospect, hit the 10-game mark in the NHL on Thursday. Like any rookie, Guhle’s still raw. But to Housley, the youngster’s growth this season – he has played 47 AHL contests with the Rochester Americans – has been noticeable.

“He’s making better decisions when to jump in, fill a hole or come from behind,” Housley said. “His decision process has gotten a lot better. (Assistant coach) Gord Dineen down there has done a terrific job. But we want him to add. Let’s utilize his speed, maybe it’s leading a rush.”

Guhle said the Sabres haven’t said much to him about moving up in the play.

“I have to be smart about it, I’m not going to be reckless,” he said. “But I haven’t done anything wrong so far so I’m just going to keep going where I see a chance.”