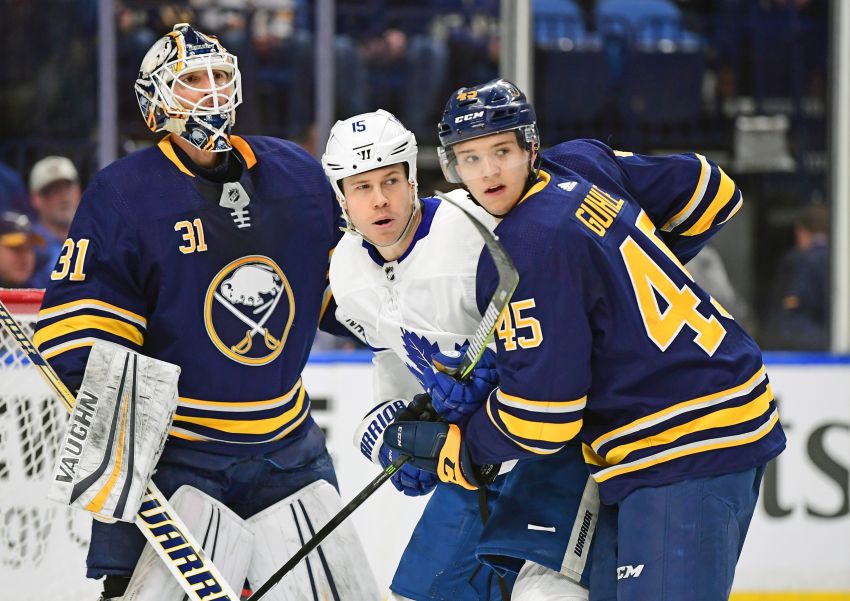 Then the Sabres recalled Guhle, 20, in early January for two games. A week later, they summoned Nelson, 25, and he quickly earned a regular spot.

So the two hadn’t played together for about two months until Sabres coach Phil Housley reunited them for Monday’s 5-3 win against the Toronto Maple Leafs inside KeyBank Center.

Prior to the game, Nelson said he expected they would “pick up where we left off” with the Rochester Americans.

“Absolutely,” Nelson said Monday morning. “It might take a few shifts to get back into the swing of things but, yeah, I don’t think that stuff goes away. It probably takes a long time for the chemistry we had in Roch to go away.”

The pair had some rough moments Monday and was on the ice for the Leafs’ second goal.

The Sabres recalled Guhle, their top defense prospect, on Sunday because “he just earned his right to get back up here,” Housley said. His speed was needed against the Leafs, one of the NHL’s quickest teams.

They also host the Calgary Flames, another fast team, Wednesday. So Guhle might be staying put.

“It’s going to be interesting,” Housley said. “I didn’t get to see a lot of games in Rochester, but just hearing about what they brought to that team down there, breaking down forechecks. They had some good chemistry, so that’s why they’re put back together.”

Guhle, who has played six NHL games, said he wasn’t expecting to be recalled.

With so many raucous Leafs fans, Monday’s environment was new for Guhle.

Kyle Criscuolo was about to leave for the rink Sunday morning when Amerks coach Chris Taylor phoned him.

With a dearth of centers, the Sabres summoned Criscuolo, 25, for the second time this season.

Criscuolo left the game in the second period was a possible shoulder injury after Matt Martin hit him. Housley had no update on him following the game.

Like Guhle, the Sabres want Criscuolo to utilize his speed. Housley played him between Benoit Pouliot and Nick Baptiste against the Leafs, the Sabres’ third line.