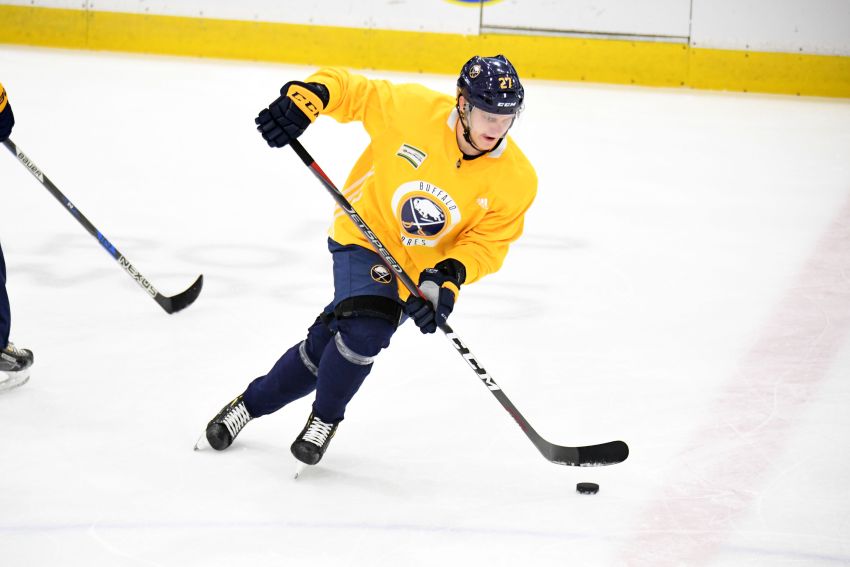 Arttu Ruotsalainen got off to a torrid start in Finland this season. ©2020, Micheline Veluvolu, Rochester Americans

On Friday, the Buffalo Sabres will touch the KeyBank Center ice for the first time in 296 days and begin preparing for the most unusual of seasons.

The NHL will be attempting to play during the COVID-19 pandemic, and it will likely experience problems – positive tests, postponements or even cancellations – as the schedule unfolds.

But those potential roadblocks can be examined another day. The Sabres’ 10-month break is nearly over. Training camp officially begins Thursday, when players report for testing and physicals.

Thirty-seven players – 20 forwards, 12 defensemen and five goalies – comprise the camp roster the Sabres released Monday. They have 11 days of practices or scrimmages scheduled before their Jan. 14 season opener against the Washington Capitals, with the first session coming Saturday morning.

If the stars become linemates – they will likely be given every chance – coach Ralph Krueger could possess one of the NHL’s best duos.

Despite having last qualified for the playoffs in 2011, the Sabres have generated excitement by signing Hall and trading for former 40-goal scorer Eric Staal.

The Sabres haven’t skated as a group since March 11, shortly before they flew to Montreal for a game that would never be played.

Some other notes on the roster:

– Defenseman Casey Nelson, who has played 93 games for the Sabres since 2016, has opted out of the season, the team confirmed.

As part of the NHL’s return to play, the league and NHL Players’ Association agreed to allow players to opt out if they’re concerned about the coronavirus.

Nelson, 28, was expected to be a depth player this season, possibly on the taxi squad or in Rochester, where he spent the entire 2019-20 season with the Americans.

– Two notable prospects who have been playing in their native Finland this season – goalie Ukko-Pekka Luukkonen and defenseman Oskari Laaksonen – aren’t listed on the roster.

– The Sabres placed forward Jean-Sebastien Dea on waivers Monday, according to reports.

The AHL has targeted Feb. 5 to start its season.

– Forward prospect Arttu Ruotsalainen, who scored a league-best 16 goals and 27 points in 19 games in Liiga earlier this season, will be participating in his second NHL training camp.

Ruotsalainen’s contract stipulated the Sabres had to send him back to Ilves, his Finnish team, last season because he did not make the NHL. He can play in the minors this season.

– Top forward prospects Dylan Cozens and Jack Quinn, who are representing Team Canada at the World Junior Championship, aren’t listed on the roster. They are expected to join camp after the tournament.

– NHL teams can field a 23-man roster and a taxi squad of four to six players this season. The extra players do not count toward the $81.5 million salary cap.

Here is the complete camp schedule: