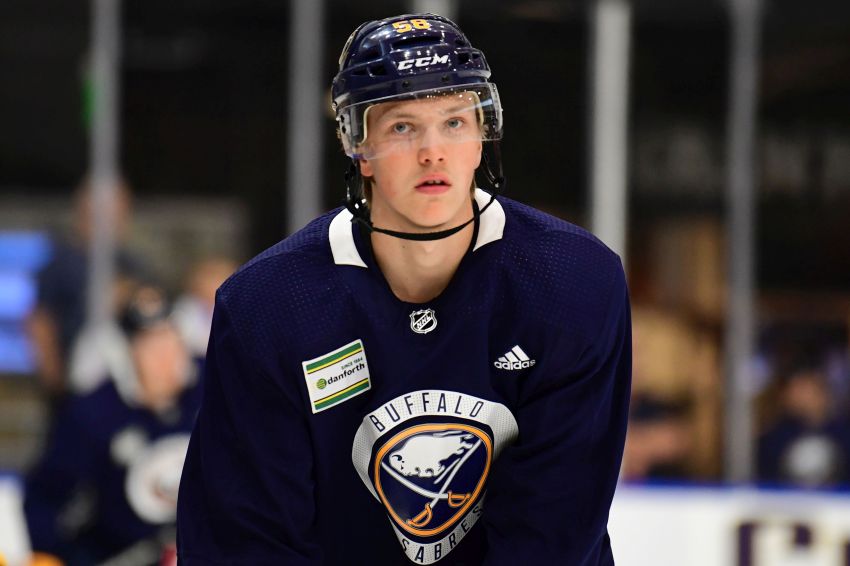 BUFFALO – Barely two years ago, unless you had spent time scouring the Finnish junior leagues for draft talent, the name Oskari Laaksonen wasn’t familiar to you.

NHL Central Scouting and other notable services didn’t even rank the Finnish defenseman. Googling his name would return some stats, that’s about it.

So when the Sabres grabbed Laaksonen 89th overall at the NHL Draft in 2017, going way off the board in the third round, the selection certainly raised some eyebrows.

Who the heck was this guy?

Well, Laaksonen, 19, has quietly morphed into one of the Sabres’ top prospects.

On Wednesday, the huge throng of media waiting to talk to Laaksonen following the first session of development camp inside Harborcenter surprised the youngster.

“Oh, (expletive),” Laaksonen said when he saw all the cameras and reporters.

Still, having won a gold medal at the World Junior Championship and played more than a season of pro hockey, Laaksonen has experienced the spotlight before.

Laaksonen won gold with the Finns earlier this year on a team that featured standout Sabres goalie prospect Ukko-Pekka Luukkonen.

“I had never won anything, so that was unbelievable,” Laaksonen said.

Laaksonen spent the rest of the season with Ilves Tampere in SM-liiga, compiling three goals and 24 points in 46 games.

Playing pro hockey against men as a teenager – Laaksonen also appeared in 21 games in 2017-18 – can do wonders for your confidence.

“I had a great year in Finland and I think I built off the confidence really well,” Laaksonen said.

At his first development camp two years ago, Laaksonen said he “was so nervous.”

“Now everything feels normal,” he said.

He added: “I know everybody and I know how this works, so it’s much easier.”

If the 6-foot-1, 165-pound Laaksonen keeps developing, he will almost certainly come to North America to play someday.

“I’m just trying to take the next step,” he said. “I don’t know how long it’s going to take for me to take. Two years? We’ll see.”

Of course, Laaksonen knows he must “get a little bigger” and pack on more muscle. Right now, he is too light for a defenseman to play in the NHL or even the AHL.

The other step before leaving Europe, he said, is “being a dominant guy.”

“Just be ready,” he said of when he comes to North America.

One of Laaksonen’s former Ilves teammates, center Arttu Ruotsalainen, might be ready to make the Sabres in 2019-20.

After scoring 21 goals and 41 points in 59 games last season, Ruotsalainen, 21, signed a three-year, entry-level contract with the Sabres in May.

Wednesday marked the 5-foot-8, 181-pound Ruotsalainen’s first appearance on the ice in Blue and Gold.

“He’s a great player,” Laaksonen said. “I played with him all year in (Liiga). Good skater, really good shot. He sees the shot well. I think with the modern center you don’t have to be that big anymore, and I think he’s a great player.”

Ruotsalainen understands his size forces him to play a certain style.

“I have to be smart on the ice and faster with the puck and do the little things really faster and smarter than the other guys,” he said.

The undrafted Ruotsalainen spent the last four seasons in SM-liiga.

Why did the Finn choose Buffalo?

“I think there’s good players,” he said, “a good chance to prove to guys I can play in the NHL.”