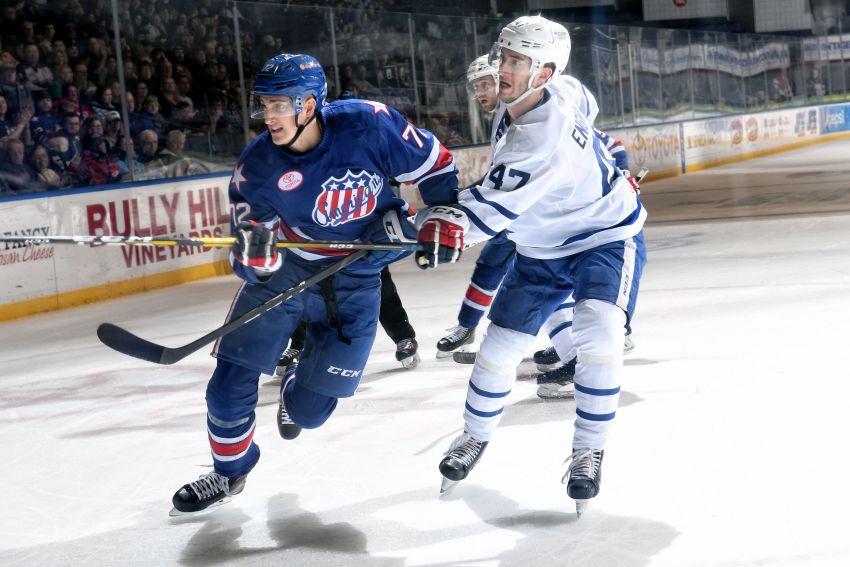 Thompson, 21, probably should’ve spent most of the campaign with the Americans. But the Sabres, perhaps to show they had something from the Ryan O’Reilly trade, kept the 6-foot-6 winger in the NHL.

So instead of thriving in the AHL, Thompson stayed in Buffalo until late March, often struggling and sitting out games as a healthy scratch.

The Sabres don’t want to make that mistake again.

On Monday, they sent Thompson to the Amerks, one of seven roster moves they made to get ready for Thursday’s season opener against the Pittsburgh Penguins.

If they clear, they will likely be assigned to the Amerks.

In addition to Thompson, they assigned center Rasmus Asplund and injured defenseman Lawrence Pilut (shoulder) to the Amerks.

Right now, the Sabres have 21 healthy players: 12 forwards, seven defensemen and two goalies. They must finalize their 23-man regular-season roster by 5 p.m. today.

The Sabres, of course, could grab players off waivers and make more moves.

But for now, defenseman John Gilmour, the biggest surprise of training camp, appears to have earned a spot with the Sabres.

Sabres general manager Jason Botterill said early in September that Luukkonen could start playing games by early November. Meanwhile, Pilut, who had offseason surgery, might return to action by the middle of October.

Thompson’s stint in Rochester, like Pilut’s a season ago, could be short. He could outgrow the AHL in hurry.

While Thompson scored only seven goals with the Sabres, he displayed flashes of talent – his heavy shot, for example – in 65 games.

After adding 10 pounds of muscle during the offseason, a dynamic month or two in the AHL could boost his confidence and earn him a spot with the Sabres.

More on the players the Sabres waived or sent down on Monday:

– Asplund, one of the Sabres’ top forward prospects, could receive his first NHL action this season. The Swede, 21, has impressed the Sabres for years and is probably just an injury or two away from joining them.

– Elie, 24, played 16 games with the Sabres after they claimed him off waivers from the Dallas Stars a year ago. He finished the season with the Amerks.

– Lazar, 24, scored 20 goals and 41 points in the AHL last season. If he clears, the former first-round pick could be a big contributor to the Amerks.

– A groin injury Wilson, 27, suffered early in camp stymied his chances of making the Sabres.

Wilson played 15 games with the Sabres last season and 17 with the Amerks after recovering from a broken ankle.

The last time two-time Stanley Cup winner played regularly in the minors, he scored 22 goals and 36 points in 34 outings with the Wilkes-Barre/Scranton Penguins in 2015-16.

– Nelson, 27, has played 93 games with the Sabres, including 38 last season. He has spent parts of the last three seasons in Rochester, playing 103 contests.

Sabres prospect Dylan Cozens has been a dynamic force since returning to the Lethbridge Hurricanes, scoring three goals and six points in two games.

In Sunday’s 5-2 victory against the Edmonton Oil Kings, Cozens scored the game-winner, part of a two-goal, four-point outing.

The Sabres sent Cozens, the seventh overall pick in June, back to his junior club on Thursday following an impressive camp. The center played three preseason games with the Sabres.