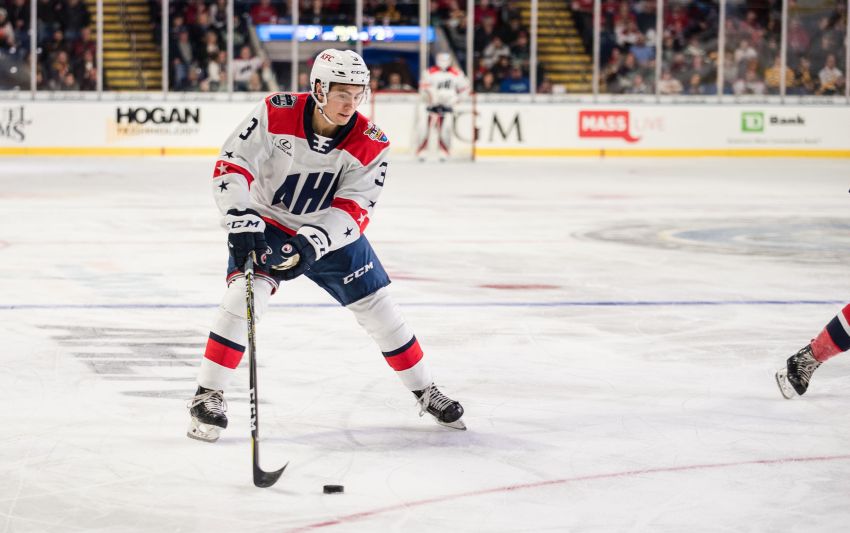 BUFFALO – Sabres defenseman John Gilmour has never experienced anything like this. In his first three NHL training camps, he never pushed for a roster spot.

“It’s new for me,” Gilmour said following this morning’s practice, the final session of camp.

So Gilmour, of course, is a little nervous. He has to wait another day or two – 23-man NHL rosters must be finalized by 5 p.m. Tuesday – to find out if he cracked the Sabres.

“It would be hard not to think about it, obviously,” Gilmour said. “So it’s a little nerve-wracking, exciting. At the end of the day, I was happy with the effort.”

The slick Gilmour, 26, morphed into the Sabres’ biggest surprise this month, earning a long look from coach Ralph Krueger, who likes the way the newcomer plays within the team’s concepts.

“You can see in the National Hockey League today how much skating can help you, and especially the game we’re playing, the pressure comes more from a fluid movement of five players skating almost all the time,” Krueger said of why of Gilmour has meshed well.

The 6-foot, 188-pound Gilmour has likely secured a spot in Buffalo, which opens the season Thursday against the Pittsburgh Penguins. Getting him through waivers to the Rochester Americans would be iffy.

“I feel like this is a good group of guys,” Gilmour said of why he fits with the Sabres. “It feels right on the ice, the way they want to play fast and offensive and aggressive in every zone.

When the Sabres signed Gilmour to a one-year, one-way contract worth $700,000 on July 1, it certainly seemed like he was ticketed for the Amerks.

Sure, he might receive some NHL action, but he was a depth player added to help the AHL club, right?

After sending Will Borgen to the Amerks this morning, the Sabres have eight healthy defensemen on the roster, a number they could keep.

“When you look at who’s out and where we’re at as far as the depth chart’s concerned, it’s quite exciting,” Krueger said. “Each player offers unique strengths and characteristics, and it’s going to be the mix that going to decide here, not an individual effort.”

The Providence product compiled two goals and five points in 33 games with the New Rangers over the last two seasons.

In other news, Sabres defenseman Jake McCabe (upper body) returned to practice today and pronounced himself ready to play.

Meanwhile, Krueger said the Sabres are optimistic about Montour’s recovery. Montour hurt his hand in his first preseason contest Sept. 17.

“You want to be careful with those things,” Krueger said. “He’s able to skate now already. That’s gone well, so we’re pleased with that.”

He added: “We’d like to see him here in the next few weeks.”

The Sabres have Monday off, s0 Krueger plans to analyze the roster.

“We can just kind of digest what’s been an excellent training camp,” Krueger said. “The competition has made it difficult down the stretch. We just want to get it right.”