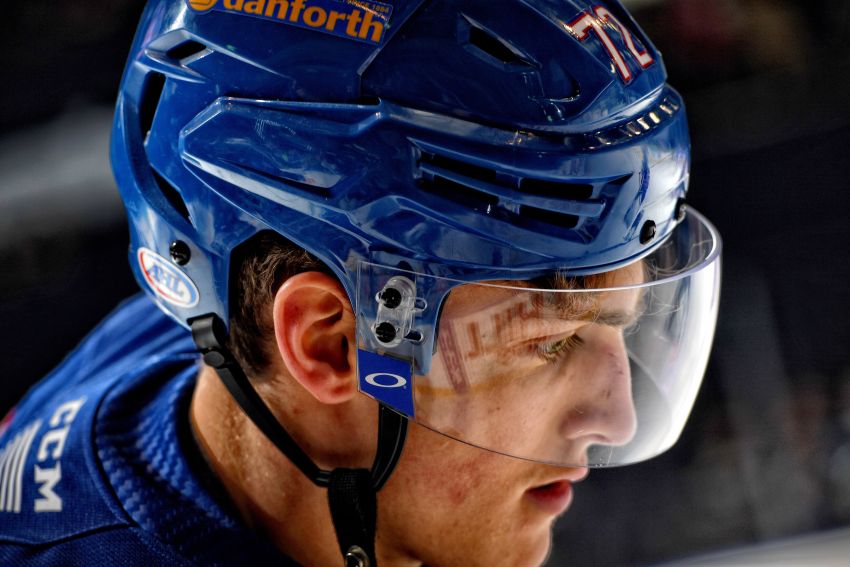 TORONTO – In the offseason, Buffalo Sabres winger Tage Thompson started what he called a “full-time job.”

“I was eating a lot,” Thompson said prior to Friday’s 3-0 exhibition loss to the Toronto Maple Leafs.

Yes, Thompson, 21, spent much of the spring and summer devouring food.

“I was probably eating five square meals a day with snacks in between,” Thompson said in Buffalo before the Sabres traveled to Scotiabank Arena.

Sound like fun? Well, it wasn’t that great, according to the 6-foot-6 Thompson.

“It was tough,” he said. “I mean, you got to force yourself to eat even when you’re not hungry. It was a chore.”

Thompson, of course, scarfed down food – lots of chicken, pasta and steak, he said – so he could pack on pounds and muscle.

Naturally, he complemented his massive caloric intake by working out regularly.

“The workouts were really tough, a lot of leg days, a lot of lower half,” he said. “Definitely not fun but definitely needed.”

Thompson, who scored a power-play goal Monday, needed to get bigger and stronger, so he embraced an arduous program.

The former first-round pick said he finished last season at about 200 or 202 pounds. He looked like a string bean.

Right now, Thompson said he weighs 215 or 216 pounds. He added about 10 pounds of muscle during the offseason.

The extra muscle, of course, will make Thompson tougher to knock off pucks and better equipped to be a power forward.

One week into training camp, he said he can already feel a difference.

New Sabres coach Ralph Krueger said: “What I like so far is the commitment he’s shown and the ability he’s shown to use his body and play a big man game. He obviously got more muscle to back that up.”

Instead of assigning Thompson to the minors after acquiring him from the St. Louis Blues last year, the Sabres kept him in Buffalo most of the season.

While Thompson occasionally showcased his talents – he can toe drag and shoot the puck like few other players – he look better suited for another season in the AHL.

After sitting out a handful games as a healthy scratch in the opening weeks, Thompson briefly caught fire, scoring four times in a six-game stretch.

But Thompson quickly went cold. When the Sabres demoted him to the Rochester Americans in late March, he hadn’t scored since Jan. 29, a 23-game drought.

Looking back, Thompson is grateful he has experienced adversity early in his NHL career.

“It makes you a better player,” said Thompson, who compiled seven goals, 12 points and minus 22-rating in 65 NHL games with the Sabres. “I mean, everyone’s going to go through adversity, so go through it at a young age for a couple years now.

“It’s something, I think, that’s made me a stronger person. I think I’m able to handle things that don’t go my way better than I was previous years.”

The short stint down the thruway provided a much-needed confidence boost.

“I needed that,” Thompson said. “They were in first place and a great team and they were going to the playoffs, so it was a big opportunity for me to go down there and get some key situations and puck touches and get some confidence in my game. I think it was huge.”

Andreas Johnsson’s power-play goal 9:48 into Friday’s contest was all the Leafs needed. The Sabres, who host Toronto tonight at KeyBank Center, fell to 1-2 this preseason.

Auston Matthews and Matt Read also scored for the Leafs.

Sabres goalie Linus Ullmark looked sharp during his 40 minutes of action, stopping 21 of the 23 shots he faced.

“You have to feel good about where he was at, made some great saves,” Krueger said.

The Sabres used a lineup devoid of stars.

Notes: In just his second preseason appearance, center Dylan Cozens, the seventh overall pick in June, was one of the Sabres’ best players Friday. “He started camp a little tentative and hesitant,” Krueger said. “The last few days we noticed it already that he was opening up a little bit and just playing his game, and tonight we saw a confirmation of that.” … Former Buffalo goalie Michal Neuvirth, who’s on a tryout with Toronto, is scheduled to start and play the first two periods. Neuvirth, 31, has battled injuries for years. … A lower-body injury kept Sabres center Kevin Porter from playing. Rasmus Asplund replaced him. … Most of the Sabres’ big names – captain Jack Eichel, defenseman Rasmus Dahlin and winger Jeff Skinner – will likely play tonight. … The Leafs announced a crowd of 16,232.