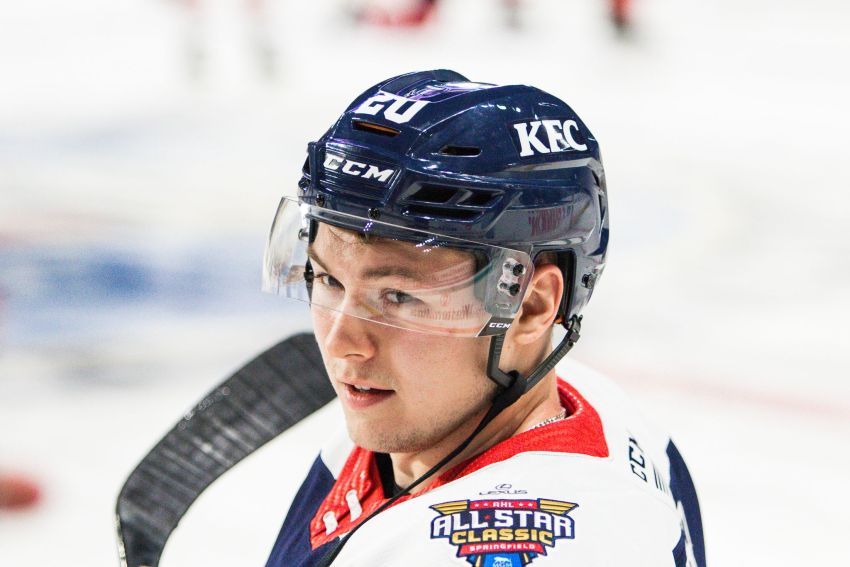 BUFFALO – Sabres forward Curtis Lazar said he began thinking about this training camp a year ago, around the time the Calgary Flames banished him to the minors.

Even with a year remaining on his contract, Lazar knew he was finished in Calgary and would have to resume his career elsewhere.

But before Lazar could do that, he needed to embrace his demotion to the AHL, a circuit he bypassed as a hot prospect.

In 2014-15, Lazar earned a roster spot with the Ottawa Senators, the beginning of what he called his “unique journey throughout the beast which is the NHL.”

While the former first-round pick piled up goals in junior, he welcomed an opportunity to play a checking role on the fourth line.

“As I look back, I was one of the best options to help that team win,” said Lazar, who’s fighting for a forward spot with the Sabres in camp. “As a 19-year-old, that’s significant.”

Still, Lazar, 24, believes he was rushed to the NHL. Sure, he stayed in Ottawa for years. But he played on the fourth line if he wasn’t scratched.

“I just kind of stayed afloat on the fourth line,” he said.

Lazar never recorded more than six goals or 20 points in a season. Following a trade to Calgary, he mustered only two goals and 12 points in 65 games in 2017-18.

So last season was critical for Lazar. Joining the Stockton Heat, Calgary’s affiliate, offered him a chance to redevelop his offensive skills and get back on the radar of NHL teams.

The 6-foot, 205-pound Lazar seized his opportunity with the Heat, scoring 20 goals and 41 points in 51 contests.

“Going down there with the right attitude, knowing I’m going to get opportunity and kind of improving on a day-to-day basis, it was huge,” he said. “I made a lot of mistakes but I made a lot of good plays, and I think I realized the good player I could be.”

Why did Lazar chose the Sabres as an unrestricted free agent?

“They’re in the win-now mode,” he said. “I want a chance to come into an organization where I can grow (with a) more younger core.”

He also knows Sabres winger Sam Reinhart, his teammate when he captained Team Canada to a gold medal at the 2015 World Junior Championship.

Lazar, of course, could be assigned to AHL again soon. The Sabres have 18 forwards left in camp and will probably keep 13 or 14.

“Even the fact we’re having this conversation means I’ve done a pretty good job of it,” Lazar said of the roster competition. “I can only do so much.”

Given Lazar’s age, talents and affordable salary, a team might snatch him off waivers if the Sabres try to send him to the Rochester Americans.

That could convince the Sabres to keep him.

The affable Lazar already fits in well. He has acclimated to his new surroundings – “I feel (at) home, I feel like myself,” he said – in less than two weeks.

“I’m just kind of out there playing,” he said. “I think it’s showing.”

Lazar’s warm personality draws teammates to him. He always seems to be smiling.

“He’s got that vibe around him,” Reinhart said. “It’s been very positive on this group, for sure – both in the room and on the ice.”

Lazar’s positive outlook has certainly helped his career. The struggles he has endured might’ve broken other players.

“I have a lot more to bring,” he said. “I think being able to develop this year and coming into this year with (a) chip on my shoulder, it’s starting to come full circle.”

He added: “Yeah, sure, things haven’t gone (in) my favor … and there’s always been that external saying that I’m a bust or I’m not a professional player, but that doesn’t affect the way that I come to the rink with my attitude, my work ethic and just being around the guys.”