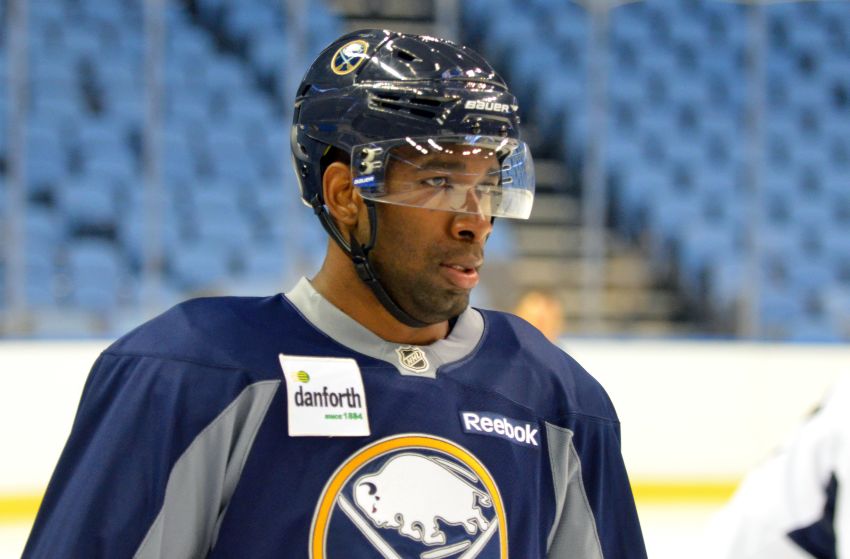 BUFFALO – As a seventh-round pick, Jordan Samuels-Thomas faced some long odds to earn an NHL contract. But the 6-foot-4, 220-pound winger possesses size, a precious commodity in today’s game.

The Sabres have made it no secret they covet “heavy,” hard-to-play-against talent for their rebuild. So they shipped a 2015 seventh-rounder to the Winnipeg Jets on Wednesday for Samuels-Thomas’ rights.

They signed the Connecticut native to a one-year, two-way contract Saturday.

“I was excited about a new opportunity with an organization that’s really excited about changing the culture here,” Samuels-Thomas said Monday inside the First Niagara Center following the first session of development camp.

Samuels-Thomas, a 2009 selection by the Jets’ old regime in Atlanta, played four NCAA seasons, the last two at Quinnipiac University. He had 50 goals and 104 points in his college career.

What helped him get signed?

“I think I just rounded out my game and found exactly what my game is,” he said. “I’m 6-4, 220. I’m a power forward. I’m going to keep the game simple, and I think that’s what I’ve learned in my years in college. I’ve also learned how to be trusted in my defensive zone.”

He added: “In college, I really developed that kind of heavy style of play, just being a power forward, being hard to move off the puck and winning battles.”

“Skill and all the other stuff will take care of itself,” Samuels-Thomas said. “But the thing that’s always under your control is compete level. I’m just trying to compete every shift out there.”

So far, the passion he’s seen from his new organization has wowed him.

“From everyone I’ve met here, they’re so serious and they’re really passionate about changing things here,” he said. “Obviously, last year was a tough year. The passion from everyone – the sincere passion – has really kind of excited me and inspired me to kind of give everything I can to the organization.”

Notes: Goalie Nathan Lieuwen, who has a history of concussions, said he’s recovered from the one he suffered during a late-season recall. “I’m fantastic,” he said. … Murray has hired Rob Murphy as a scout, according to reports. The two worked together in Ottawa. Murphy, who was at FNC on Monday, played 125 NHL games. … Rochester coach Chadd Cassidy and his assistant coaches ran Monday’s session. Nolan still needs to hire NHL assistants. … Prospects are wearing shirts with the phrase, “Go hard or go home.” … The Sabres originally listed Samuels-Thomas at 6-foot-3 and 195 pounds.