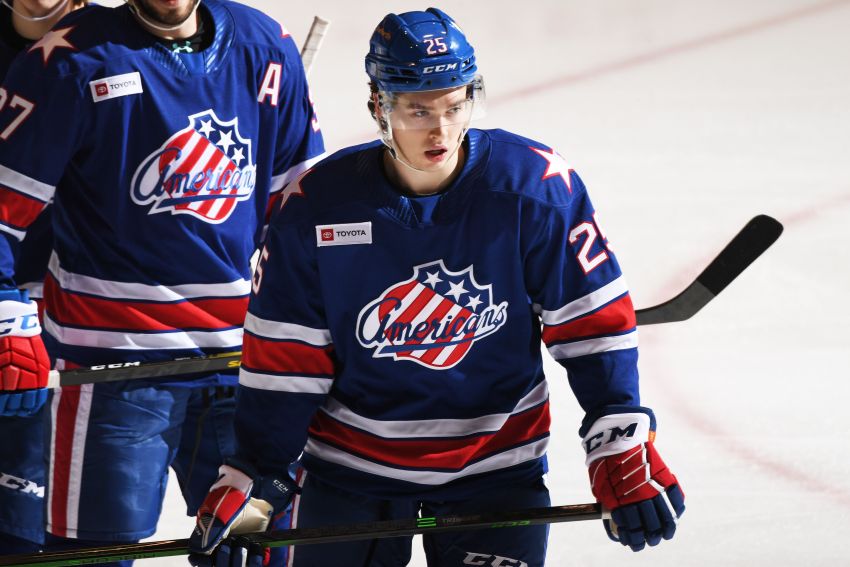 “I wasn’t expecting to be selected but … I was ready to go if I was called upon,” Quinn said on a Zoom call following the Amerks’ 4-3 victory over the Utica Comets.

Quinn seized his opportunity, faking a shot before slickly deking and tucking the puck by goalie Jon Gillies’ left pad.

On the bench inside Blue Cross Arena, Amerks center Jean-Sebastien Dea turned and exchanged looks with Appert. Quinn’s goal was that impressive.

“For Jack to handle the moment, the pressure in his first pro game with that kind of calmness, I thought said a lot about him,” Appert said following the Amerks’ third straight win.

Dea thinks Quinn’s stint in the American Hockey League will be very short.

“He’s got all the assets to be a great NHL player,” said Dea, whose shootout goal sealed the victory.

In a normal year, the 6-foot, 176-pound Quinn would be starring for his junior team, the Ottawa 67s. But the COVID-19 pandemic has forced the Ontario Hockey League to keep delaying its season. Teenagers who play for Canadian Hockey League teams normally can’t skate in the AHL until their team’s season is over.

So right now, prospects like Quinn, who scored 52 goals in 62 games last season, have a special opportunity to develop against men.

“This is the best development league in the world for a reason,” Appert said of the AHL. “Major junior hockey is extremely good, but sometimes when you get older and you’re as talented as some of these guys are, maybe it isn’t as challenging.”

Appert said he’s “a big believer that adversity fuels growth in your game and in your life.”

“He and other 18-, 19-year-olds are going to face adversity, because this is a really good league and there’s darn good players,” he said. “They’re stronger, older and more mature in their game. And he’s going to have success, but there’s going to be adversity that comes with being in the American League, and that adversity’s going to force his game to grow.”

Quinn hadn’t played a game since Team Canada’s loss in the World Junior Championship gold medal game Jan. 5 in Edmonton. He spent the early portion of this season on the Sabres’ taxi squad before he was sent down Feb. 1.

But following his arrival, the Sabres began battling COVID-19 problems, so Quinn was forced to quarantine in Rochester.

“A bit of a wake-up call not playing for a bit, some big guys out there,” Quinn said. “I thought I got a lot better as it went on and a lot better in the second and third. So I definitely feel a lot more confident now with one game under my belt.”

Quinn wasn’t very noticeable early Thursday. He even got stuck on the ice during a couple of shifts.

“That was a bit of an eye-opener in itself,” he said. “And then I think sometime in the second our line had a good shift and I got a shot on net and kind of settled in from there.”

Appert said: “He did a good job of staying with it, not getting frustrated when he had shifts where he didn’t touch the puck.”

Quinn started the game at right wing beside Dea and Remi Elie. But that line and the others weren’t generating much, so Appert put Quinn beside Smith for two shifts in the second period.

“I felt a little something there,” Appert said. “So we made that switch.”

Quinn finished the game beside Smith and Brett Murray.

“His comfort grew,” Appert said. “He even had to go down low as a center in the defensive zone a couple times, and I thought he handled game one very well.”

Quinn showcased his soft hands and hockey IQ late during a late power play. After grabbing defenseman Oskari Laaksonen’s at the right point and skating into the circle, he deftly fed the Finn a backhand pass back to the point.

“I knew Laaksy would be open since (an opponent) was pressuring me,” Quinn said. “So I just kind of threw it back there.”

Fogarty from Laaksonen and Quinn! Game is tied 3-3. pic.twitter.com/iBpKgBtxvt