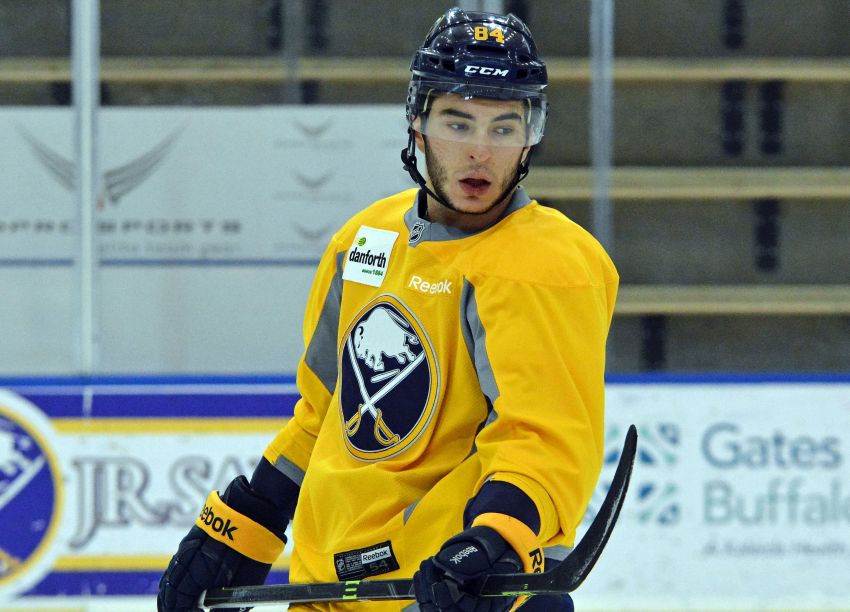 BUFFALO – Prior to Phil Varone’s 19th NHL game Tuesday, the Sabres center couldn’t find his No. 84 written on the board with the team’s new line combinations.

The 24-year-old looked again and found it an unexpected spot.

“I didn’t see it at the top,” Varone said Wednesday following practice inside HarborCenter. “It was pretty surreal, obviously. I was in the AHL three weeks ago. It’s just pretty special.”

Yes, Varone, who has three goals and four points in his short career, is now the Sabres’ No. 1 center. He played between Tyler Ennis and Matt Moulson throughout Tuesday’s 3-0 loss in Tampa Bay, skating a career-high 19 minutes, one second.

Trades and injuries have created openings all over the lineup. Seven players who dressed for the Sabres’ 3-0 loss to St. Louis one month ago today have been traded. Three others are hurt.

The Sabres, the NHL’s worst team, have filled all the forward spots with call-ups from Rochester.

Johan Larsson, a 22-year-old with one goal and seven points in 50 NHL contests, is now the No. 2 center.

So the Sabres’ top two centers have combined for four goals and 11 points in their careers.

“For young guys who really believe that they can play in the National Hockey League, they’re going to have an opportunity to prove that they can,” Sabres coach Ted Nolan said.

Center Tim Schaller and wingers Jerry D’Amigo and Zac Dalpe could also play regular minutes during the final 18 games. The three, who have 11 total NHL goals, spent most of this season in Rochester. The Sabres summoned D’Amigo and Schaller on Tuesday.

“I told five or six of our guys that are in this position right now, normal situations, you probably wouldn’t get a long look like this,” Nolan said. “You might get a look, a short one. On a consistent basis like this, those opportunities don’t come around too often. If there’s an opportunity to prove yourself, this is one of them.”

Varone, a slick AHL scorer, understands he will likely never be awarded a better chance to showcase his talents.

“It’s not about not getting an opportunity anymore,” Varone said. “I’m getting my opportunity, so it’s on me.”

What has Nolan told Varone?

“He hasn’t really said much, just kind of, ‘There it is and take it,’” Varone said. “I don’t need to kind of be babysat through it. I know what’s in front of me. I’m going to go out and try to take it.”

Varone paid plenty of dues before this opportunity. He went from a training camp invite to Rochester’s leading scoring as a rookie in 2011-12. He topped the Americans in scoring again last season, when he received a nine-game recall.

The former San Jose draft pick has 14 goals and 43 points 52 AHL appearances this season. He had a seven-game run with the Sabres in January. Despite a two-goal outing, Nolan was unimpressed with Varone’s play then.

Right now, however, Varone is Nolan’s best option. The Sabres are woefully thin down the middle.

“He’s fun to play with, he’s a great kid,” Ennis said about Varone. “He’s creative out there. He makes a lot of good plays, and that’s why Matty and I enjoy playing with him.”

Before Tuesday, Varone had never skated more than 15 minutes, 19 seconds in an NHL game. Still, as a junior and AHL star, he’s used to playing big minutes.

“It felt normal to be in that groove-type thing,” said Varone, who also played on the power play Tuesday. “I play those type of minutes, maybe more, in Rochester. So I think for the type of player I am, it becomes second nature for me. This is a whole different league. It’s time to prove myself.”

Varone can prove himself beside some good friends from Rochester. Their presence in Buffalo offers comfort.