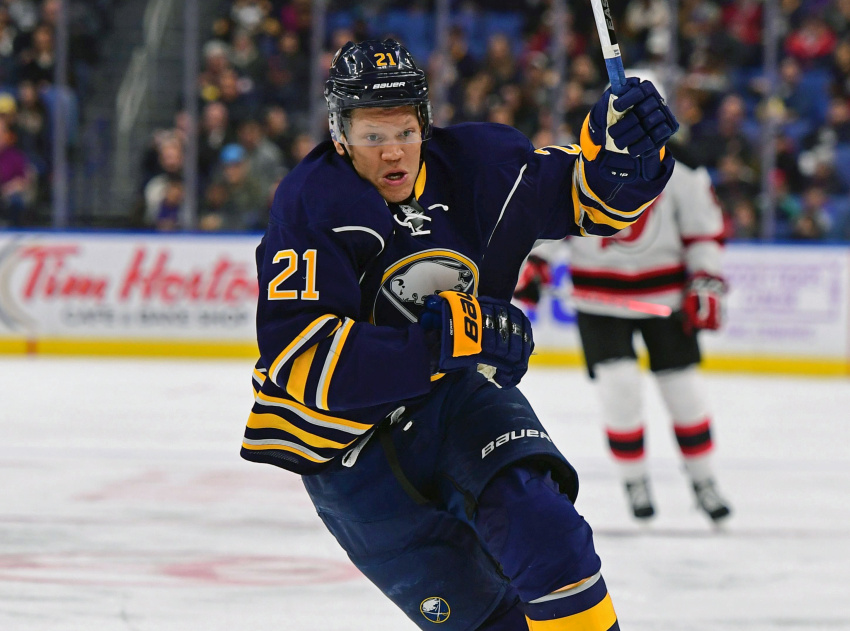 BUFFALO – With a slew of established, high-priced forwards and two talented youngsters poised to break out following terrific rookie seasons, the days of the Sabres owning one of the NHL’s worst offenses appeared to be over.

But 15 games into another tough season, the Sabres have scored only 29 goals, a paltry 1.93 a contest, the league’s worst figure entering tonight’s road tilt against the St. Louis Blues.

The Sabres have scored two or fewer goals in seven consecutive games. No wonder they have a four-game losing streak (0-2-2) and losses in five of the last six contests (1-3-2). They have only cracked the three-goal mark five times this season.

Right now, the Sabres are on pace for 159 goals over 82 games, just nine more than they had in 2013-14, when they scored the fewest goals in a full season ever.

The Sabres won 6-2 Oct. 16 in Edmonton, meaning 21 percent of their goals came in one game. That was the only time they scored more than three goals. They have a league-worst team shooting percentage of 6.73 percent and have scored only 20 even-strength goals, the second-worst total.

Want more? Incredibly, the Sabres don’t have a single goal from a defenseman, not even Rasmus Ristolainen, who scored a hat trick in one period last season.

Sure, some of the anemic output can be blamed on injuries.

“We’ve had our bigger scorers out of the lineup,” Sabres coach Dan Bylsma said Monday following practice inside HarborCenter. “But through 15, the number is low, for sure.”

The Sabres’ inability to earn power plays recently – believe it or not, they rank 11h overall in man-advantage scoring, operating at 20.5 percent – has hurt them. They have enjoyed only 13 power-play opportunities in the last eight games.

“We should be playing so that teams have to get penalties against us,” Bylsma said. “ … Given the lineup we have, we have to manufacture goals in a hard and difficult way.”

The Sabres, meanwhile, have taken a whopping 26 penalties in the last five games.

“We got to stay out of the box,” Sabres winger Kyle Okposo said. “That’s something that needs to be addressed and needs to be executed.”

Sabres winger Matt Moulson said: “It’s tough to get a rhythm for anyone going.”

Those three have combined for 52 percent of the team’s goals.

“I’ve only got one shot in the last two games,” he said. “I got to find a way to create more opportunities for myself and my linemates and teammates. I got to put that pressure on myself. … I definitely expect more out of myself.”

Okposo is one of the few players living up to expectations. Sam Reinhart, Eichel’s main winger most of his 23-goal, 42-point rookie season in 2015-16, has struggled without his close friend, scoring just twice.

Of course, at least Reinhart is producing a little bit. Fifteen players haven’t scored a goal yet. Marcus Foligno and captain Brian Gionta are the only other players who have hit the three-goal mark.

Given the injuries and team’s low shooting percentage, things could eventually flip. The Sabres have played several games in which they generated enough offense to score four or five goals.

Many nights, however, they can’t score more than one.

“We have the opportunity to get the second goal,” Bylsma said. “It’d be a big boost for our team, get the second goal in the Ottawa game (Wednesday, a 2-1 loss). I think it’s what our team is looking for. It’s what our team needs and not just to get into 0-0 game or get into a 1-1 game. We have to fight to get that second goal. We have the opportunities to do so. We just need to cash in on them.”

The Sabres have wasted some terrific goaltending from Robin Lehner and Anders Nilsson, whose 2.33 combined goals-against average is tied for fifth in the league.

One thought on “Sabres’ offense struggling to score again”