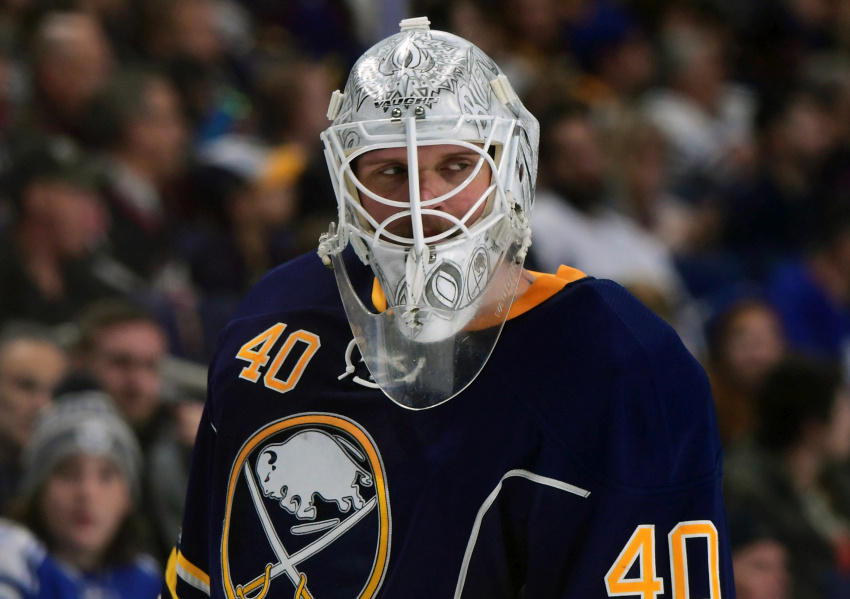 OTTAWA – Buffalo Sabres goalie Robin Lehner, coach Dan Bylsma said recently, gets a twinkle in his eye whenever he plays the Senators.

“Absolutely I can tell that,” a grinning Bylsma said following the Sabres’ 2-1 comeback win, a game in which Lehner starred, stopping 32 shots.

The Swede dazzled strong throughout his fourth straight start, allowing the Sabres to roar back with two third-period goals before the crowd of 16,225 fans inside the Canadian Tire Centre.

Lehner said: “No matter who we played today, it was a win we needed. We don’t want to lose two in a row.”

After Kyle Okposo tipped Jake McCabe’s weak wrist shot in at 1:07, Sam Reinhart put the Sabres up at 8:22, stuffing in Zemgus Girgensons’ shot when Anderson couldn’t secure it at the goal line.

What else helped the Sabres complete their first comeback victory this season?

“I just think we got going,” Okposo said. “We sharpened up. I thought we did a really good job taking it to them. That’s what’s good teams do. When you’re not at your best, you go to find ways to win.”

Lehner was their backbone. He made two highlight-reel stops – a sprawling stick save Jean-Gabriel Pageau early and a point-blank stop on Mark Stone later to stymy a two-on-one.

“I think I’m move better laterally this season,” said Lehner, who reshaped his body during the summer. “I think the Pageau save, it’s nice that I got it, but I put myself in a position.”

The triumph, the Sabres’ fourth in five tries, put them in an unusual positon. They’re 5-4-2, meaning they’re over .500 for just the second time since January 2013.

Stone beat Lehner earlier in the period, wiring a one-time from inside the left circle at 2:42.

The Senators, one of the NHL’s biggest surprises through three weeks, had their three-game winning streak snapped.

The Sabres received a scare late in the first period when Cody Ceci’s slap shot hit defenseman Rasmus Ristolainen squarely in the back of the helmet. Ristolainen, of course, fell to the ice. But he quickly got up, skated to the bench and didn’t miss a shift.