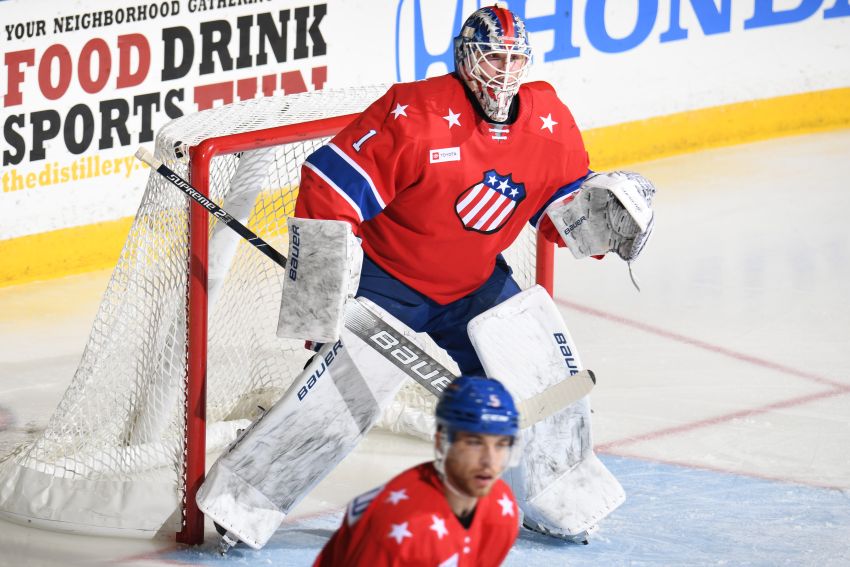 The Sabres have become woefully thin in net, losing Linus Ullmark and Carter Hutton to injuries after trading Jonas Johansson.

If Luukkonen hadn’t suffered a lower-body injury with the Rochester Americans, the Sabres likely would’ve recalled him before Thursday’s 5-2 road win over the Washington Capitals at Capital One Center. The Finn missed Wednesday’s 5-3 loss to the Cleveland Monsters in Rochester.

Adams said the 6-foot-5, 196-pound Luukkonen, 22, skated Thursday and the Sabres could summon him today.

The Sabres host the Pittsburgh Penguins on Saturday and Sunday afternoons.

“So we’ll see where we’re at tomorrow,” Adams said on a Zoom call Thursday of Luukkonen possibly playing. “But there may be a situation if he’s where we feel he’s ready, and depending on the health of our other goaltenders that we’ll know over the next 24-48 hours goes, yeah, that may happen.”

Adams had no update on the lower-body injury Ullmark suffered early in Tuesday’s 3-2 shootout loss to the Boston Bruins. He said the Swede needed to be examined. Meanwhile, Hutton has missed the last 13 games recovering from a lower-body injury.

With only two healthy netminders Thursday – Dustin Tokarski, who started against the Capitals, and Michael Houser – Adams said the Sabres were forced to use an emergency backup as their taxi-squad goalie.

NHL teams must carry three goalies this season between the active roster and taxi squad. The Sabres recalled Houser from the taxi squad before Thursday’s game.

The Sabres don’t have any other goalies in the organization playing on an NHL contract.

Luukkonen, a second-round pick in 2017, 54th overall, has struggled since the Amerks’ COVID-19 pause last month, losing four of his six starts.

Overall, Luukkonen has compiled a 7-5-2 record with a 3.60 goals-against average and an .888 save percentage in 14 AHL games this season.

The Sabres briefly recalled him to the taxi squad for several days late last month, his first taste of the NHL.

In Jason Karmanos, Adams believes he hired an associate GM he is “philosophically aligned” with.

“Jason and I have known each other for a very long time, there’s certainly a history and a trust that we have had built over years,” said Adams, who was teammates with Karmanos on Team USA’s entry at the 1994 World Junior Championship. “In saying that, we’ve never worked in this type of setting together so it was critical that we talk philosophically what we believe.

“The opportunity that I outlined for Jason was very important for him to understand the roles and responsibility. But I want to be really clear: Everything that’s going to be happening from today moving forward in our organization, Jason’s going to be involved with. We’re going to make decisions together. We’re going to work hand in hand in every area with other staff members.”

Karmanos, who was officially hired Wednesday, said on a Zoom call Thursday he had an opportunity with another team.

“At the end of the day, I was more excited about coming to Buffalo and being a part of helping and the Pegulas and everybody else in the organization and getting to where we want to get to,” Karmanos said. “I believe … the passion for the game and the Sabres in the market, that’s to me, that’s a really exciting thing.”

Karmanos, 46, will serve as Rochester’s GM and oversee scouting, player development and analytics. He most recently served in the Pittsburgh Penguins’ front office.

The Sabres made one lineup change up front, inserting Tobias Rieder for Riley Sheahan, who was banged up from a hit Tuesday.

Sabres prospect Jack Quinn, the eighth overall pick in 2020, played center for the first time as a pro Wednesday instead of his usual right-wing spot with the Amerks.

Adams said the data Quinn, 19, generated during his 52-goal junior season with the Ottawa 67’s in 2019-20 indicated “he played as almost as if he was a center.”

If the Ontario Hockey League season had been played, Adams said Quinn likely would’ve been shifted to center during his final junior season.

Adams said the Amerks have a “seriously decimated” lineup right now, so he and coach Seth Appert discussed the move before Wednesday’s game. Quinn recorded two assists against the Monsters.

“(We) thought it would be good to give him the opportunity,” Adams said. “He was tremendous yesterday.”