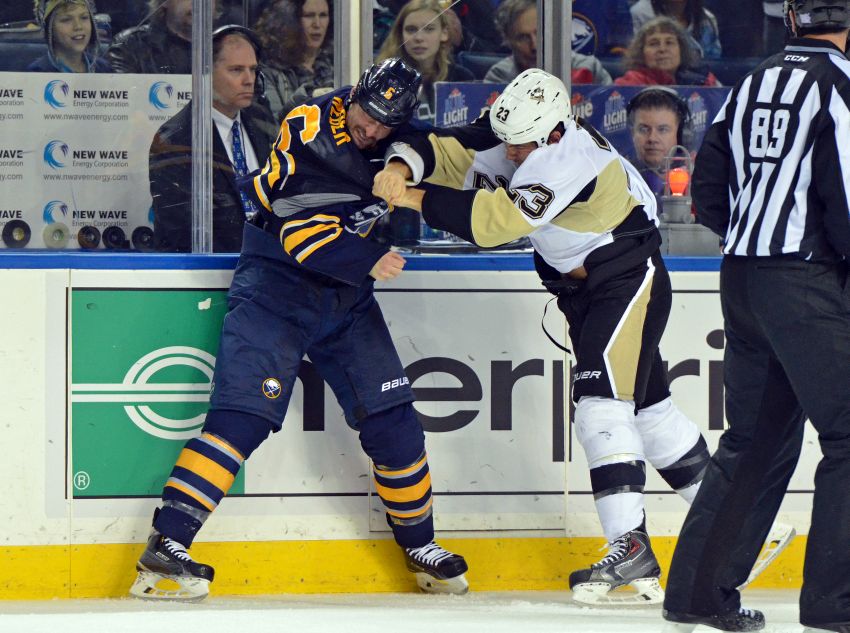 The Pittsburgh native played again in Saturday’s 6-1 loss to the Penguins inside the First Niagara Center.

“It was extremely tough,” Weber said Saturday morning about sitting out. “So I still don’t really understand what was going on there. It is what it is. I’m a professional. I come to work ready to work.”

Weber said he hasn’t discussed his benching with Sabres coach Ted Nolan. Clearly, the Sabres had to change their lineup after that blowout loss to the Penguins. Weber, a minus-6 entering Saturday, was scratched with Andre Benoit.

“I kind of talked to the other coaches on the staff and stuff like that,” said Weber, who fought Steve Downie later. “From what I gather, it was just a change to change stuff up. That’s all I know.”

The Sabres gave up 52 shots in Friday’s 3-2 loss to Edmonton, so Nolan sat Benoit and defenseman Andrej Meszaros, who he strongly criticized for a weak effort on the Oilers’ winning goal.

After time expired Friday, Sabres center Tyler Ennis skated over to linesman Derek Nansen and tapped the official with his stick.

“I was a little frustrated,” he said Saturday morning. “I just went to go talk to the linesman and tap him on the bum lightly. But I got his hand a little bit and he was a little upset, so I went and apologized after the game to him and the referees. I kind of just said I shouldn’t take my frustrations out on them, because they’re just doing their job.”

The league could have suspended Ennis for abuse of officials.

“We’re fragile sometimes and emotional things happen,” Nolan said. “Fortunately, it wasn’t too bad. It was just one of those learning things that we have to control our emotions at all time.”

Penguins superstar Sidney Crosby on the assumption 17-year-old phenom Connor McDavid’s presence will quickly transform a team into a contender next season: “Anyone who follows hockey knows it takes more than one guy. It doesn’t hurt to have a good piece like him to start it off, though, that’s for sure.”

The Penguins missed the playoffs in 2005-06, Crosby’s rookie season. McDavid’s the biggest junior prospect since Crosby.

Notes: Former Sabres defenseman Christian Ehrhoff played his first game in Buffalo with the Penguins. The Sabres bought the German’s contact out in June. “The first game back is always a little strange and a little different feeling,” Ehrhoff said. … Sabres winger Marcus Foligno (shoulder) missed his fourth straight game. He said he could play Tuesday in St. Louis. … Sabres winger Patrick Kaleta, out since a puck hit him in the face Sept. 28, has settled on wearing a tinted visor with a jaw protector when he returns. The Angola native has been experiencing vision problems on the ice. He tested out several shields.

Update: The Sabres sent Johan Larsson back to Rochester today. The winger has zero points in four games.