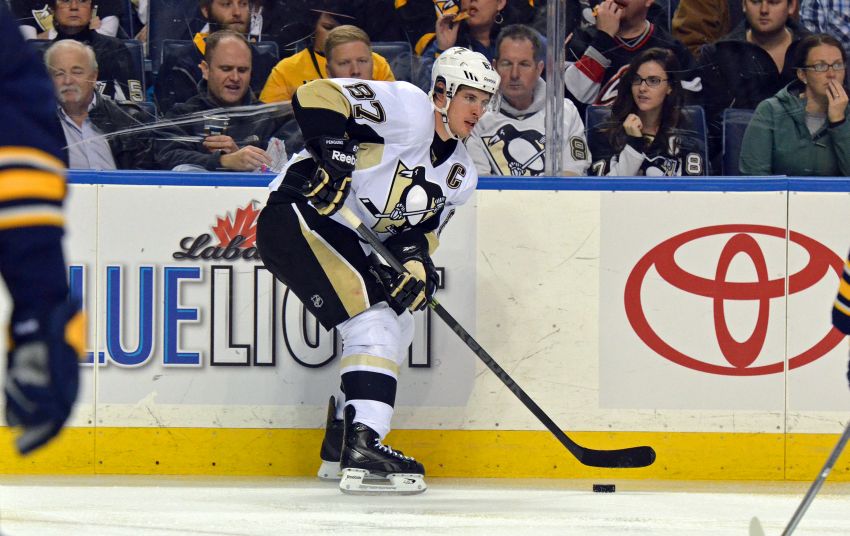 BUFFALO – This one lasted one shift. Eighty-one seconds into the Pittsburgh Penguins’ 6-1 annihilation of the Sabres, Kris Letang converted Sidney Crosby’s slick pass, the first of the superstar’s five assists Saturday.

The Penguins utterly destroyed the hapless Sabres before a capacity crowd of 19,070 fans inside the First Niagara Center.

The potent Penguins scored again before the Sabres recorded their first shot 13:21 into the lopsided contest. They led 3-0 after the first period, 6-1 after the second and have outscored the Sabres 23-3 during their five-game winning streak against the club!

The Penguins have won seven straight overall. The Sabres, meanwhile, fell to 3-11-2. They’re 0-2-1 in their last three outings.

“I said to the team in between the second and third period, ‘You run out of words,’” Sabres coach Ted Nolan said. “What do you say? Except you say it over and over again, and you can’t quit. Our fans pay good money to watch us play, at least compete and perform for that if there’s nothing else.

“What can you say? We got to find a way. We got to keep searching for it.”

At their current pace, the Sabres are destined to become one of the worst teams in NHL history. They have 18 goals in 16 games, a 92-score pace. The Sabres scored an NHL record-low 150 goals last season.

Crosby’s 19-game point streak against the Sabres began Dec. 29, 2007, three days before the teams played each other in the Winter Classic. The ultra-slick center has 10 goals and 36 points in that span. Saturday was Crosby’s third five-assist game and sixth five-point game in his 10-year career.

“When you play a team like that, you can’t play timid, you can’t play on your heels,” Sabres defenseman Josh Gorges said. “That’s what happens. You give them space, you give them room (and) they make things happen. Don’t be afraid to lose. We got to play with an edge.”

Gorges was on the ice for every goal Saturday.

The veteran searched for words before answering a question about his play.

“There’s no real answer,” he said. “We keep talking about it, but I got to face the facts. It’s not nearly good enough. My job is to be a solid defensively, give the team a chance, be a leader, and to be scored on that many times is embarrassing. I’m embarrassed for myself. I got to be way better than that.”

“One thing you can never do about Gorges is complain about how he’s doing for us,” he said. “He competes every game, and Crosby showed why he’s a world-class player. I don’t care who you are. … Josh Gorges is not one of our problems, he’s one of our bright lights.”

Nolan lauded Girgensons and Rasmus Ristolainen and Nikita Zadorov, the team’s No. 1 defense pair Saturday. All three are 20 years old or younger.

“They’re by far our best players,” he said.