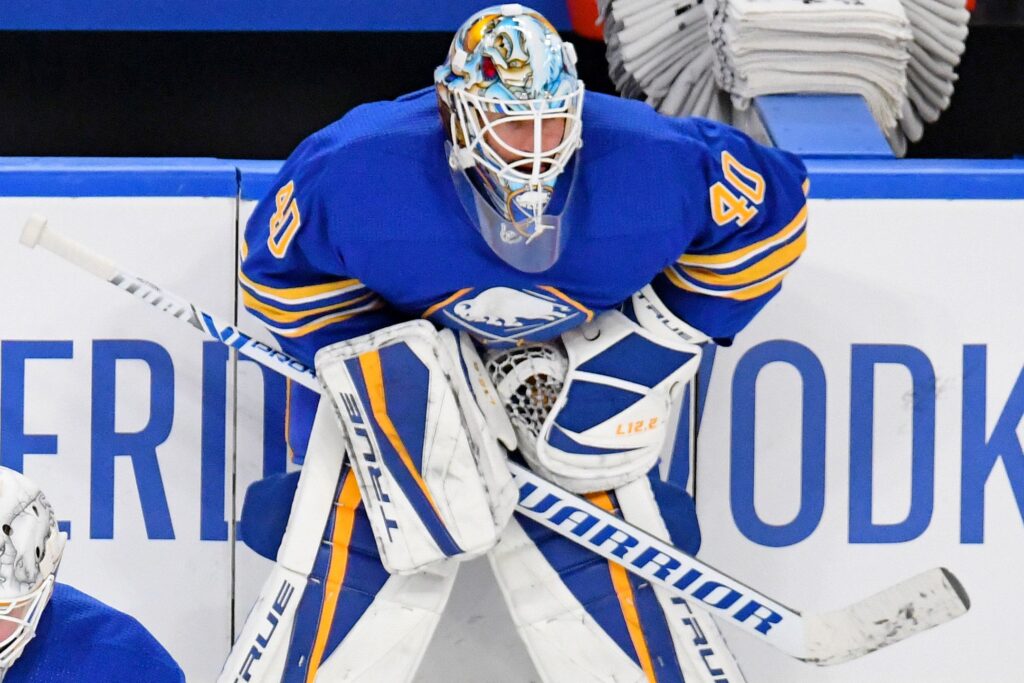 Carter Hutton missed two games after getting hit in the head. ©2021, Micheline Veluvolu

BUFFALO – When Ivan Provorov hit Carter Hutton in the head Jan. 19 in Philadelphia, the Sabres goalie said he felt the effects of it right away.

Still, Hutton stayed in the game. Stubbornness, he said, took over.

“I’m competitive and I want to play,” Hutton said on a Zoom call this morning. “I kept communicating with (head athletic trainer Rich Stinziano), but I definitely didn’t put him in an easy spot, too, because I wanted to keep playing. I didn’t want to leave.”

But following the second period, Hutton, 35, knew he had to exit the game. He did not feel well. If he stayed in, he understood he would be putting himself and the team in jeopardy.

“I kind of had to make a mature decision at that point,” he said. “Ten years ago, I probably wouldn’t have, but at this point, I knew it was best for me and the team to take that period off and get back to normal here.”

Jonas Johansson replaced Hutton for the rest of the Sabres’ 3-0 loss to the Flyers. Hutton did not accompany the team last week to its two-game series in Washington.

Hutton skated this morning and will dress for tonight’s game against the New York Rangers at KeyBank Center. Linus Ullmark, however, will likely be making his third straight start.

Following the game, Sabres coach Ralph Krueger called out Provorov’s hit, saying it was “a violent type” and the defenseman knew what he was doing. But Hutton doesn’t believe Provorov, who was knocked into him by Sabres defenseman Brandon Montour, had any intent to hit him.

“I think Ralph was upset after a few high hits that happened,” Hutton said. “I think Eric (Staal) got hit high and (Rasmus) Dahlin just got punched in the face. Monty gets off-balance and comes into me. I’m kind of defenseless because I’m trying to track the puck.

“It came off my elbow and my arm. I don’t think it’s like an intentionally dirty hit. I think obviously Ralph … he’s going to stick up for us. But at the end of the day, I think guys are just playing hard.”

As he recovered from the hit, Hutton said he paid special attention to his vision. He told The Buffalo News last year he worked to correct an eye problem that hampered his play.

“It’s obviously frustrating from my end and the last thing I’m trying to do is make excuses,” Hutton said of his vision. “I think sometimes I almost regret going public with that, but it is what it is. At the same time, I think I learned a lot on that landscape with neuroscientists and different vision and brain coaches, so it’s something I have the skills now and a lot of different people now to help me through this.

“Even just getting banged up in this sense, I think I have the tools now to make sure everything is rolling good and to get right back into it.”

Hutton played three of the Sabres’ first four games and had found an early-season groove. Now, he will likely go at least a week between playing games.

Still, Hutton, who once backed up workhorse Pekka Rinne with the Nashville Predators, knew Ullmark would probably handle much of the load this season.

“I don’t think it will be that big of an issue,” Hutton said of his layoff. “Realistically, this is kind of what I set myself up to do. You don’t know how the schedule is going to go, but realistically, Linus is going to play a good amount of games, right?

“He’s really developed into a heck of a goalie here, so my job is to push him and be ready to play when I play. I don’t think anything changes and … I played a few years with Pekka where I literally for a few weeks just made sure his coffee was hot. I know how to stay ready and I’ll definitely do that.”

In other news, Krueger said Sabres defenseman Henri Jokiharju is day to day with a “very minor” injury and could miss tonight’s game. The Finn did not skate this morning.

While Krueger wouldn’t rule him out, defenseman Matt Irwin acknowledged he would be making his season debut.

Meanwhile, the Sabres sent forward Casey Mittelstadt back to the taxi squad this morning and recalled rookie winger Dylan Cozens from the practice group. Cozens, 19, sat out Sunday afternoon’s 4-3 shootout win against the Capitals.

Cozens skated at right wing beside Staal, a center, and Victor Olofsson this morning.