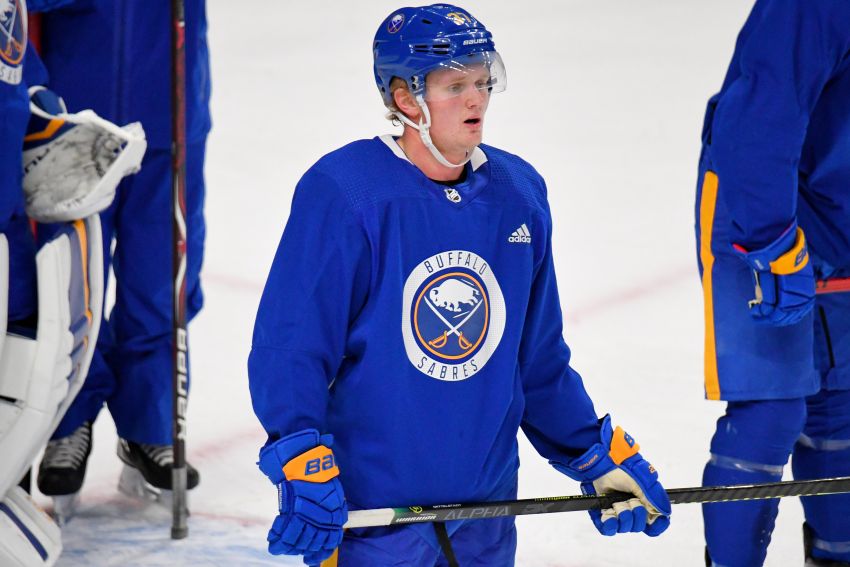 In his first stint in the minors, Mittelstadt, 22, never morphed into a dominant AHL presence or forced his way back to the Buffalo Sabres. The center compiled nine goals, 25 points and a poor minus-15 rating – hardly numbers you might expect from an eighth overall pick with 114 games of NHL experience.

But Mittelstadt, who was demoted on Dec. 15, 2019, embraced his time in the minors. As the weeks progressed, he began to look more comfortable and showcase his slick skills.

The Amerks offered him an opportunity to kill penalties and play in different situations he hadn’t experienced in Buffalo.

After a rough start in Buffalo last season, Mittelstadt insists the three months he spent in Rochester helped him clear his mind and develop into a more well-rounded player.

“I had a blast there,” Mittelstadt said on a Zoom call Sunday. “I think it was a good experience for me. I went down there, I knew a lot of guys on the team already, so it was a pretty easy locker room to walk into. It was a great time. I think I just got to go down there and play and it kind of freed my mind.

“It was good to meet some of those guys and that experience, and I think playing more I just kind of got my confidence going a little bit again, started making more plays with the puck and kind of felt my game come back a little bit.”

Sabres coach Ralph Krueger said Mittelstadt “was the strongest finishing forward in Rochester” before the COVID-19 pandemic forced the AHL and NHL to pause their seasons.

“He was about to come back into our lineup with the Sabres,” Krueger said.

But do the Sabres have anywhere to play him?

Their four centers – Eichel, Lazar, Eric Staal and Cody Eakin – are pretty much set. So are their eight wingers. Mittelstadt’s best chance to be playing in the Jan. 14 opener might be filling in for winger Zemgus Girgensons, who suffered a lower-body injury Monday.

Mittelstadt, who played 77 games as a rookie two years ago, almost feels like an afterthought this season.

The Sabres fired Jason Botterill, the GM who drafted Mittelstadt in 2017, in June, along with others who had worked closely with him. Still, Adams said he’s intrigued by Mittelstadt’s talents.

“Sometimes with young players if they’ve been in the organization for a little while, it’s easy to forget they’re young players,” Adams said. “So the message that I’ve had to Casey and his agent is we believe in him as a player. We’re excited about him moving forward.

“We believe that everything should be earned, and that we want him to come in and earn his spot, earn his ice time.”

Mittelstadt acknowledged he has thought about how Botterill’s dismissal could affect him.

“I’d be lying if that wasn’t the case,” he said. “I think that would happen to just about anyone. At the same time, I think I control what I can control, I guess, and just go and get better and get myself ready for camp.”

Mittelstadt prepared for camp by reshaping his body during his time at home in Minnesota during the COVID-19 pandemic. He’s cognizant his strength – he couldn’t do a pull-up at the NHL Scouting Combine in 2017 – must improve and has often been an issue.

“It was just getting in the weight room,” Mittelstadt said. “It was nice that I had a little extra time to spend some time. Obviously, that’s kind of been a big topic for myself over the last few years, and just get in the weight room and work out and get in shape, work on my conditioning.

“I thought it ended up working out pretty well, I got to spend some extra time and my body feels really good right now.”