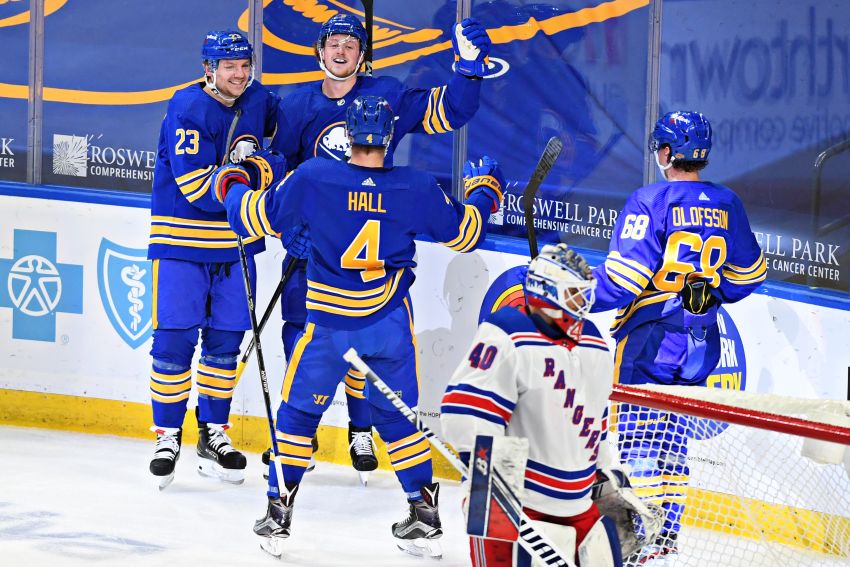 BUFFALO – The biggest anomalies on the Sabres’ stat sheet through their first six games were the zeros attached to captain Jack Eichel’s name.

The ultra-talented center, of course, wasn’t going to carry a 0.0 shooting percentage much longer. Sure enough, 7:31 into the second period Tuesday, he one-timed Victor Olofsson’s feed past Rangers goalie Alexandar Georgiev, putting the Sabres up.

“I’ve had a lot of chances,” Eichel, who scored 36 goals last season and registered a 15.9 shooting percentage, said on a Zoom call. “I think if I wasn’t getting chances, I’d be more frustrated. Yeah, it’s a relief to get one and put one into the back of the net and kind of get that out of me.”

Sabres coach Ralph Krueger felt after Eichel secured Sunday’s 4-3 road win over the Washington Capitals, he was close to scoring his first real goal since March 9, 2020.

“The (shootout) goal was going to break the ice for him and gave him the feel, ‘I can do this.’ I wasn’t surprised on his next clear chance (he scored). … So a very, very important step for Jack, for us to get rid of that egg.”

Eichel’s goal was the Sabres’ fifth power-play goal in the last two games. Rookie winger Dylan Cozens tied the contest at 1 on the man advantage 12:50 into the game, one-timing center Eric Staal’s feed in the slot.

“He’s obviously such a smart player,” said Cozens, who scored his first NHL goal Friday. “He finds the open guy. I knew as soon as it was going to him he was going to tap it to me, so it was a great play by him.”

Cozens, who was scratched Sunday to rest, said he took sitting out as an opportunity. He said he lifted weights and got his body ready for Tuesday’s game.

“I look at it as a positive to make sure I was ready to go today,” he said.

The power play, which struggled a bit earlier this season, boasts more depth than in the past. Cozens and Staal both play on the second unit, which scored for the second straight game.

“You can argue that they’ve been almost better than us,” Eichel said of that unit.

Krueger said: “We have two units firing right now. That really is lethal. Very few teams have that kind of productivity from both units. The second unit is showing that kind of danger and power that shows the depth we have this year compared to last year where the second power play was usually a give-me to the opposition. …

“We all know specialty teams are going to be a difference maker in this division.”

It certainly was Tuesday. The Sabres killed all three of the Rangers’ power plays. Two seconds after Buffalo’s too many men penalty expired, winger Tobias Rieder scored a nifty breakaway goal at 6:03, tying the game at 2.

The Sabres survived a late Rangers flurry after the pulled Georgiev and winger Taylor Hall was penalized for boarding 18:23 into the third period.

“Special teams has been good for us the last few nights,” said Eichel, whose Sabres got outshot 15-2 in the third period. “That’s something that we’ve put an emphasis on this season and we need to make a difference for our team.”

He added: “We like where our group’s at right now. We think we’re only scratching the surface on the way we can play. So I think it’s exciting times right now.”