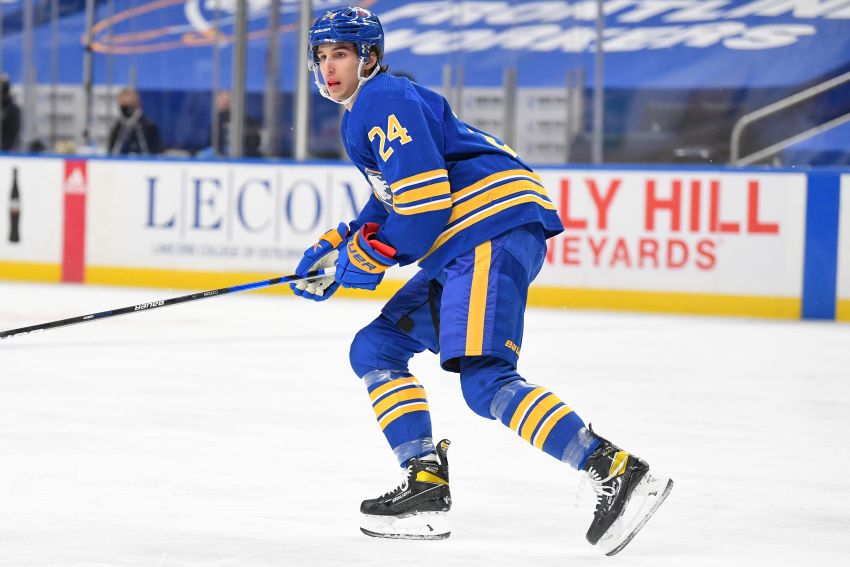 Dylan Cozens has looked comfortable with the Sabres. ©2021, Micheline Veluvolu

“It’s scary to think I was him back in the day,” Staal said on Zoom call after the Sabres prepared for tonight’s road game against the Philadelphia Flyers. “Time goes fast.”

In 2003-04, Staal, now 36, was a neophyte learning the rigors of NHL life. To boost his development, the Carolina Hurricanes gave him a locker next to captain Ron Francis, who was playing in his 23rd and final season.

“Pretty phenomenal,” Staal said of being so close to Francis.

The next season, Staal sat beside Rod Brind’Amour. The opportunity to learn from Francis, who would be inducted into the Hall of Fame, and Brind’Amour, who could land there someday, helped shape Staal’s career.

“I had two pretty good mentors to follow after,” Staal said. “It was one of those things, as a young guy, for me, I just watched how they prepared, how they went about their business, how they responded to certain things.

“(I) still was trying to be myself but trying to learn what it takes to be a regular, an everyday NHLer consistently for a long career.”

Not surprisingly, the Sabres have given Cozens, 19, a prime spot in the dressing room between Staal and captain Jack Eichel.

Cozens, who was playing junior hockey two weeks ago, understands Staal’s wealth of knowledge can be an invaluable resource. Still, he doesn’t want to ask the 17-year veteran too many questions.

“I don’t really want to bug him too much,” Cozens said following Sunday’s practice at KeyBank Center. “But obviously he’s a guy who’s been in the league for a long time, he knows a lot, he’s won a Stanley Cup, he knows what it takes. So there’s a lot of things I can learn from him just helping me out, giving me advice.”

Cozens, the seventh overall pick in 2019, can even seek advice from Staal on the ice tonight.

After Friday’s 2-1 loss to the Washington Capitals dropped the Sabres to 0-2, coach Ralph Krueger said he would make changes. On Sunday, he promoted the 6-foot-3, 188-pound Cozens to right wing beside Staal and Victor Olofsson.

Cozens’ defensive and physical talents – rookies often struggle away from the puck and against older opponents – helped him earn a promotion to the second line.

“What stands out truly is his ability to take care of the gritty work that needs to be done to play in the National Hockey League and to not be a risk (defensively),” Krueger said.

Staal said Cozens’ “mind and his brain for the game” have helped him acclimate to the NHL.

“You can see it at work daily, whether it be practice or even in games,” Staal said. “If something didn’t go right, the next time he does it, he does it differently and gives himself a better result. I think he’s always engaged, you can tell he’s taking a lot in.”

Cozens had to be engaged during his battles with Zdeno Chara on Friday. Krueger said Cozens fared well against the 6-foot-9 Capitals defenseman.

“He had a couple of situations where he was able to make something out of it,” Krueger said. “So that stands out, his ability to read the game and then also his calm and confidence. You can feel it on the bench, during practice now, he’s very quickly part of the group and part of the team and has integrated himself as a person.

“His offense and his ability to create and/or to score is certainly going to evolve off of this platform.”

Cozens said “the speed of the game and the size and strength of players” have been his biggest adjustments.

“I’ve put in work to become stronger so I can battle these guys and stuff but obviously, they’re a lot stronger than I’m used,” he said.

Through two outings, Cozens has registered one assist and averaged 12 minutes, 29 seconds of ice time. Krueger started him on the third line beside center Cody Eakin and Tobias Rieder. Cozens also played on the second power-play unit.

The Sabres want to ease Cozens into the NHL. That’s why he was shifted to right wing instead of being utilized as a center, his natural position.

Krueger doesn’t want to overwhelm Cozens. At some point, Krueger said the Sabres could tap into their forward depth and sit out Cozens or other young players.

“Three forwards share two spots for a stretch,” Krueger said. “It’s gonna be very important to get that right and it’s not easy because we’ve never quite been in this territory before. But a scratch of a Dylan in the future or of any of our other evolving players shouldn’t be a surprise to anybody. We need to make sure we don’t give anybody too much too quickly that they fall right off the cliff.”