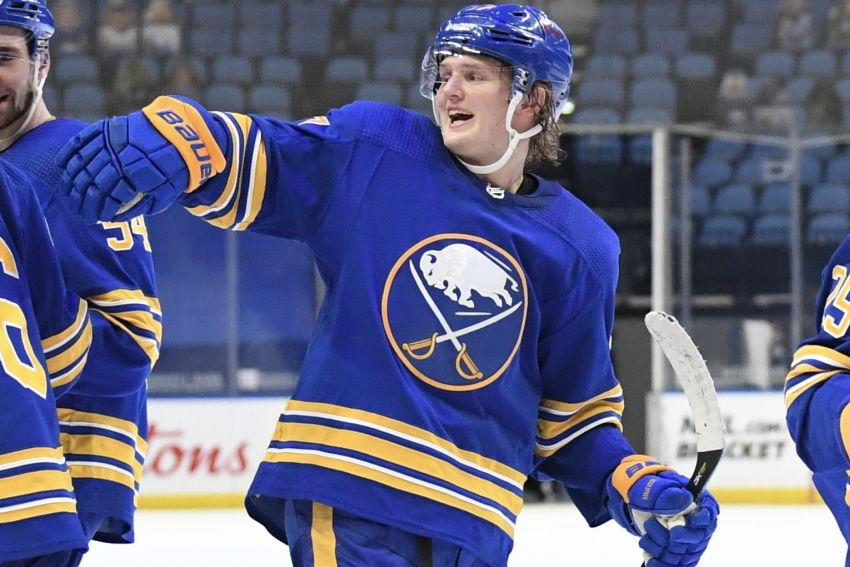 Then on opening night, Mittelstadt, 23, suffered an upper-body injury. The Sabres estimated then he would be sidelined at least two weeks.

Seven weeks and 21 games later, Mittelstadt is finally ready to play. The American will return for tonight’s road game against the Florida Panthers.

“It’s something I haven’t dealt with before, so some days were different than others,” Mittelstadt told reporters following Wednesday’s practice in Sunrise, Fla. “But (you) try to keep a positive attitude, keep moving forward. It was kind of a long injury. Maybe longer than expected, but there was progress. I felt it getting better every day, even if it was a little bit, which I think helps the mind a lot.”

Mittelstadt enjoyed a strong training camp, earning a gig as the Sabres’ No. 1 center.

Mittelstadt has centered Zemgus Girgensons and Rasmus Asplund during the last two practices.

A nagging injury forced Bryson to miss Monday’s 7-4 loss to the Seattle Kraken. Tokarski left Tuesday’s practice early after taking a shot in the facial area.

Granato also said goalie Craig Anderson, who suffered an upper-body injury Nov. 2, accompanied the Sabres on their trip and skated on his own.

The Los Angeles Kings on Wednesday claimed Wolanin, 26, off waivers. The Sabres acquired Wolanin on Oct. 16 after the Kings waived him.

Wolanin made his only appearance Nov. 8, registering a minus-2 rating while skating 8 minutes, 18 seconds in the Sabres’ 5-3 loss to the Washington Capitals.

Power, 19, has compiled three goals and 23 points in the first 16 games of his sophomore season at Michigan.