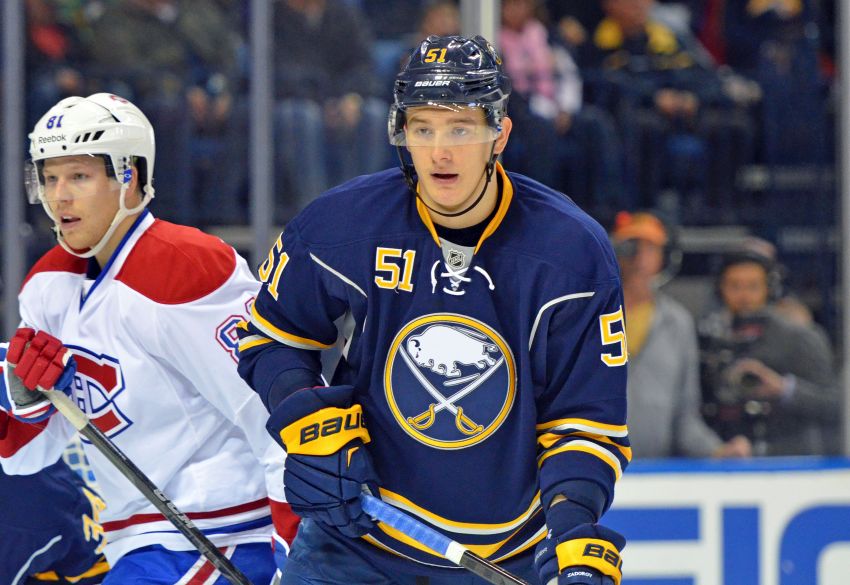 BUFFALO – Nine weeks ago, Nikita Zadorov wasn’t even ready to play in a prospects tournament. The 19-year-old Sabres defenseman, one of the few players with NHL experience, got benched.

“That benching was not because I’m a bad player, because I was not ready for that game,” Zadorov said Thursday inside the First Niagara Center. “Coach (Chadd Cassidy) said I didn’t have enough effort. It’s kind of my bad, and it was in my head.

“Maybe I wasn’t ready for that tournament. But now I’m ready here. It’s not going to happen again.”

Tonight in Washington against the Capitals, Zadorov will play his 10th game, meaning the first year of his entry-level contract will begin. It’s the official point of no return.

But the Sabres said earlier this week they planned to keep the Russian, the No. 16 pick in 2013.

Zadorov has experienced a startling transformation. He played in only one of the team’s first 12 games before starting regular duty Nov. 2.

Today, the youngster’s one of the Sabres’ best defensemen, skating more than 20 minutes some nights beside Rasmus Ristolainen, a 20-year-old they drafted eight spots before Zadorov.

Remember, the Sabres kept stashing Zadorov on their roster earlier this season so they wouldn’t lose control of him for the rest of the campaign. He needed a release from his Russian club to return to junior.

What has happened? How has Zadorov morphed from a spare part into a mainstay?

In short, he matured very rapidly.

“There’s some things in part of his life he had to change, as far as his approach to the game he has to change, and that was kind of a collective (effort) – kind of like (what) the city’s going through right now is kind of what our team went through,” Sabres coach Ted Nolan said.

Zadorov, Nolan said, had “to go through certain steps in order to get” where he’s reached today.

Nolan said what he just experienced with Zadorov is “kind of déjà vu again.” As a junior coach in Sault Ste. Marie, Nolan and his staff mentored Chris Simon.

“His career was going one way,” Nolan said about Simon. “We put him on a certain type of program in order for him to dig himself out of it, and he did. He went on to have a really great career.”

Nolan and the team used the same approach with Zadorov.

“We had some veterans on the team helping him go through it,” he said. “We had some coaches work him extra, strength and conditioning coach Doug McKenney work him extra. It was a team buildup to help a young man reach his potential.

“To watch it grow over the last month was pretty special. So now we got to worry about just keeping it going.”

Zadorov rarely worries. For a teenager 16 games into his NHL career, he possesses supreme confidence. That September benching was “already forgotten right after the game.”

“I’m not the kind of guy who’s going to think about it all night, not sleep,” Zadorov said. “Now I’m just taking it day by day.”

The hard-hitting Zadorov said he’s had that confidence – some believe he’s cocky – “with me my whole life.”

“When I was growing up, I played the same style of the game, and I … had really good confidence on the ice,” he said. “I … think it’s one of my pluses, because I’m not nervous before the game, and I’m not scared to do something, make mistakes, because everybody makes mistakes.”

How did Zadorov develop that confidence?

“I don’t know,” he said. “I just think when I step on the ice, I try to be the best player on the ice. When I’m getting like something nice, like at the start of the game, making good pass, making good plays, making a good hit, my confidence is going up for the game.”

Zadorov’s minutes rose steadily from six in his season debut Oct. 23 to around 12 and then into the 20s. He played a season-high 25 minutes, 17 seconds Nov. 13 in Minnesota.

Most of those minutes have been beside Ristolainen.

“I think it’s unreal,” Zadorov said about the two youngsters playing together. “You don’t see that every day (with) guys the same age. … We’re just pushing each other, helping each other, just supporting each other to keep getting better every game.”