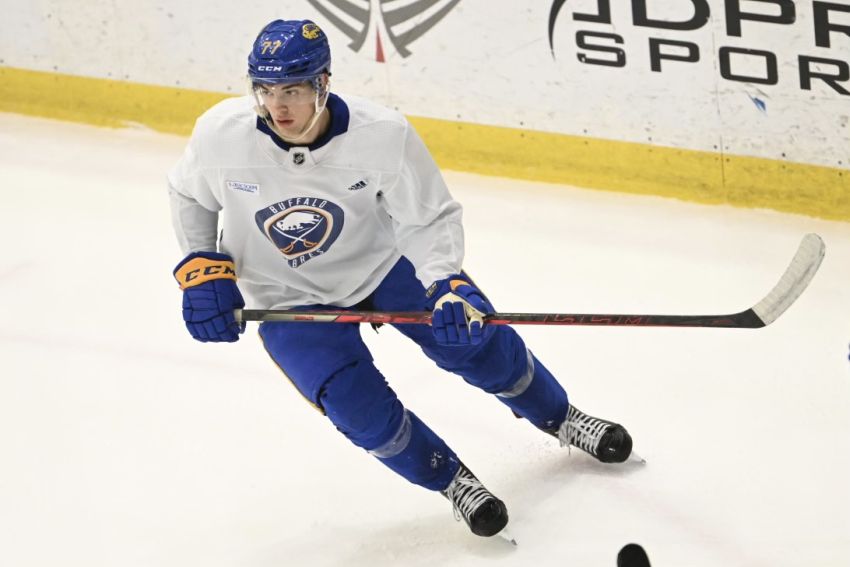 BUFFALO – The Sabres on Monday finalized their 23-man regular-season roster, sending goalie Ukko-Pekka Luukkonen and defenseman Lawrence Pilut to the minors and placing forward Riley Sheahan on injured reserve with a muscle injury.

That means wingers JJ Peterka and Jack Quinn, both of whom enjoyed dynamic rookie seasons with the Rochester Americans last year, have made the big club.

While Peterka did not stand out during training camp, the Sabres are confident he can make the jump.

“We’re going to push JJ, we’re going to challenge him to make sure that he’s learning every day, he’s growing every day,” Sabres general manager Kevyn Adams said following Monday’s practice at LECOM Harborcenter. “But I think the body of work that himself and Jack Quinn had in Rochester last year helped us feel comfortable that they’re ready to take this step.”

After a slow start last year, Peterka, 20, compiled 28 goals and 68 points in 70 regular-season games for the Amerks. The German enjoyed a terrific postseason, registering seven goals and 12 points in 10 outings.

“He was dominant in the playoffs last year,” Adams said. “So we know here in Buffalo that young players are going to need reps, they’re going to need to kind of figure some of these things out.”

Meanwhile, Quinn, 21, had a stronger camp than Peterka, looking comfortable throughout. He earned AHL top rookie honors last season, scoring 26 goals and 61 points in only 45 regular-season contests. In the playoffs, however, he mustered just two assists in 10 games.

Despite being a healthy scratch much of last season and failing to stand out during camp, winger Anders Bjork, 26, earned a roster spot.

“He’s in the league and that’s a great spot to be in,” Granato said of Bjork last week. “You’ve just got to be ready for that opportunity. There is opportunity. That window of opportunity, you’ve got to be able to seize it and perform to the point that coaches make decisions – you can’t take the guy out type of thing.

“I think that he’s had a career that he’s had some length now, and that’s really the final step for any player to consistency, is when you get opportunity do the things that – there’s always talk that you need to replace somebody to get in this league.”

The Sabres’ final moves were expected.

Adams has said the Sabres want Luukkonen, a prospect labeled as their goalie of the future, to handle the load in Rochester. Pilut, who returned to the organization this season following two years in Russia, did not need to clear waivers.

Amerks goalie Malcolm Subban suffered a lower-body injury in Sunday’s 5-1 preseason loss to the Utica Comets and could be sidelined “a little bit of time,” according to Adams.

Adams said Subban, 28, was being reevaluated Monday morning and the Sabres would know more later in the day.

Subban, who cleared waivers last week, suffered a season-ending wrist injury with the Sabres on Jan. 11.

“It’s … frustrating for players – and having been there myself – when you work so hard to put yourself in a position to have success,” Adams said. “You’re healthy, had good summer and then you have a setback.

“So, I mean, he’s just such a phenomenal person. And I told him we look at him (as a) really important person in our organization. He has a really big job.”