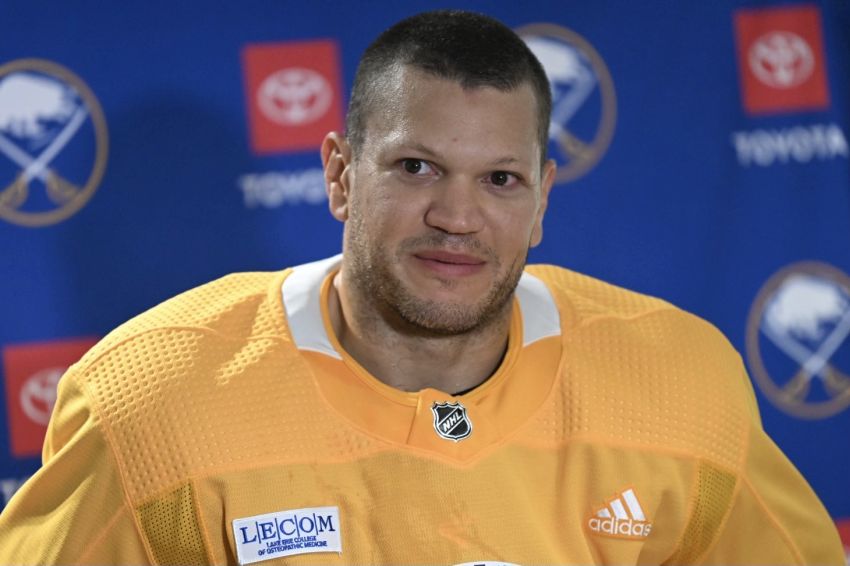 BUFFALO – Coach Don Granato acknowledged the Sabres could’ve named Kyle Okposo their new captain long before Saturday. But in waiting, fans could get to know the team, watch it develop and understand the 16-year veteran’s influence on the group.

“Everybody now has seen enough of Kyle to realize that this is the right move for our organization,” Granato said following Monday’s practice at LECOM Harborcenter. “That I’m real proud of. It’s not like we just named him captain, because we could’ve done that a year ago, and I don’t think that would’ve been right. …

Saturday’s announcement of Okposo as the 20th full-time captain in franchise history had been expected for months. Even the American, 34, said he knew he would be awarded the prestigious letter this season.

“It’s probably the worst-kept secret there was,” Granato said.

He added: “If you start to act a different way or do things differently, guys see through that. You can’t fool anybody. Authenticity is definitely No. 1 on the list.”

Okposo isn’t a rah-rah, in-your-face leader. The winger’s known for his professionalism and ability to remain even-keeled. After the Sabres stripped Jack Eichel of the captaincy a year ago and traded him, Okposo’s influence helped transform a locker room filled with newcomers and youngsters into a tight-knit group.

“Donny and I and the coaches spend a lot of time talking to Kyle and he’s giving us feedback,” Sabres general manager Kevyn Adams said. “And (he says), ‘Hey, I see this, I sense this, maybe we need to push a little harder, maybe we need to pull back.’ …

“The other thing he has great feel for is perspective and the ups and the downs and maintaining consistency. That comes with experience. So for me, that’s just such an important part of leadership. It’s not about standing up and pounding the table and saying follow me; it’s about doing the right things consistently, saying the right things and then people make the choice, people make the choice to follow.

“And what became very clear to me last year … was because of the way he handles himself, the players say that’s someone I want to follow and learn from. I think that’s just as powerful as anything I can say today.”

The Sabres take pride in the culture they’ve created over the past year. Everyone can be themselves. Players often say there are no cliques.

“They’re loud, they’re quiet, they’re serious, they’re funny and they’re accepted,” Adams said of the personalities that mesh. “And when you and create that culture and atmosphere it allows people to be the best version of themselves.”

As a result, leadership has spread throughout the team. A few years ago, it would’ve been difficult to pick out three players who deserved to wear a letter. Now, the Sabres have plenty of deserving candidates.

Okposo, who served as an alternate captain with Girgensons last season, said the room changed organically. Players simply share a passion for hockey and enjoy being around each other.

“It’s not always the case when you play in the NHL, to be honest with you,” he said. “I’ve been on teams where you have certain guys where you don’t really mesh with and it’s not as much fun to come to the rink. This group just loves it.

“I can’t explain the environment enough. When we’re having breakfast and everybody piles in and we’re talking about the night before. It’s so much fun to be down in that locker room with these guys.”

Okposo has endured a lot of turmoil in that room. The Sabres haven’t made the playoffs during his tenure, finishing dead last twice. He has played for four coaches and three GMs.

At times, as he battled a scary string of concussions and other injuries, it appeared he might never recapture his old form. But he enjoyed a remarkable comeback season in 2021-22, scoring 21 goals and 45 points in 74 games as the Sabres showcased significant growth.

“My whole career hasn’t been in a straight line, and it very rarely is,” Okposo said. “You have ups and downs, and you deal with life in different situations, on the ice, off the ice. Yeah, to kind of have the year that I had last year and be pretty healthy and continue to come into this year and feel good and have some stability, it just feels great.”

Most new captains, of course, are younger and have more term left on their contract, so Okposo’s situation is a bit unique.

“We just feel that he’s earned this right through the way he handles himself to wear that ‘C’ and that’ll take care of itself,” Adams said. “But for where we are with our team right now it was the right decision.”

Okposo said he has thought “a little bit” beyond this season.

“But I’m just really looking forward to getting going,” he said. “I think we’ll cross that bridge whenever is appropriate and figure it out from there.”

Okposo practiced on Monday in a non-contact role for the first time since suffering an upper-body injury in last Tuesday’s preseason game.

He’s unsure of his status for Thursday’s season opener against the Ottawa Senators at KeyBank Center.

“I felt great today,” Okposo said. “Took a bump or two that I wasn’t supposed to. But that’s hockey. So, yeah, I was definitely encouraged about that.”