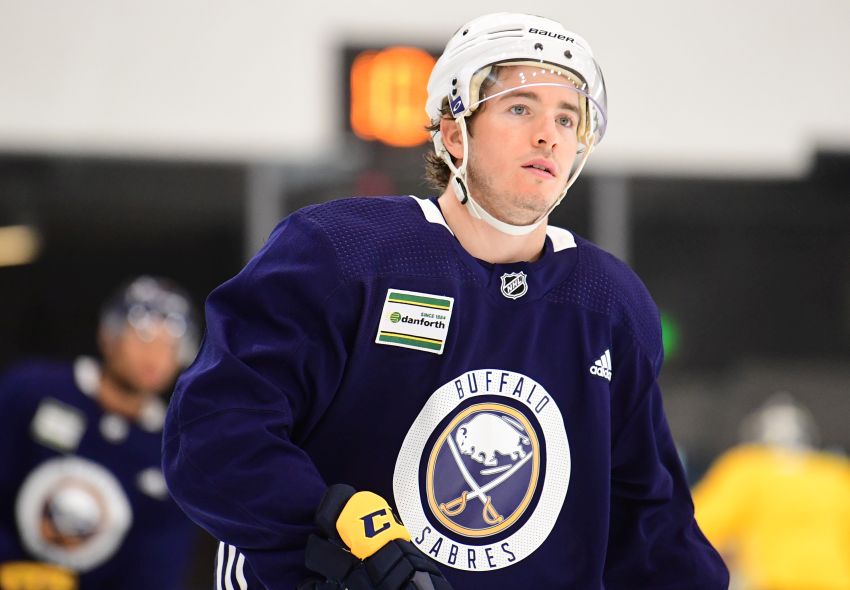 C.J. Smith was piling up points in Rochester. ©2018, Hickling Images

BUFFALO – Late in the 2016-17 season, the Sabres rewarded C.J. Smith with two NHL games after the forward left UMass Lowell following his junior year to sign an entry-level contract.

And then, Smith, 24, quietly went to the Rochester Americans, where he morphed into a top scorer and an intriguing prospect.

Still, the Sabres kept Smith in the AHL nearly a season and a half before finally summoning him this morning.

Even as the Sabres struggled mightily last year, Smith, an AHL All-Star, stayed down and kept developing. This season, despite a strong training camp, the Sabres picked winger Tage Thompson over him.

So tonight’s tilt against the New York Islanders will be extra special for Smith, who has scored 13 goals and a team-high 29 points in 33 games with the Amerks this season.

“Honestly, I think I’m even more excited to get in tonight than I was maybe my first NHL game, because everything happened so quick, I really didn’t take for granted the whole situation,” a smiling Smith said this morning inside KeyBank Center. “I worked really hard to get back to this point. Obviously, the coaching staff down there has helped my game out a lot. I think I’ve been pretty consistent and a pretty good overall player.”

But the Sabres, who rank third in the Atlantic Division, have struggled since their 10-game winning streak last month, losing 10 of their last 14 contests (4-6-4). Their offense, most notably the secondary scoring, has also dried up.

Check back later for more on Smith. Housley said it hasn’t been decided where Smith will play.

In other news, Housley said captain Jack Eichel, who had a maintenance day Sunday, will be a game-time decision. The slick center was among a handful of Sabres who skated this morning.

Sabres goalie Carter Hutton will be opposed by old friend Robin Lehner, who blanked the Toronto Maple Leafs on Saturday.

The surging Islanders (44 points) have won three straight games and six of the last seven. A regulation win would move them two points behind the Sabres.

“What I recognize in this team is a very mature team, very consistent, very emotionally stable team,” Lehner said.

The Sabres will use the same defense as Saturday’s 3-2 overtime loss to the Boston Bruins, meaning rookie Lawrence Pilut will be a healthy scratch.