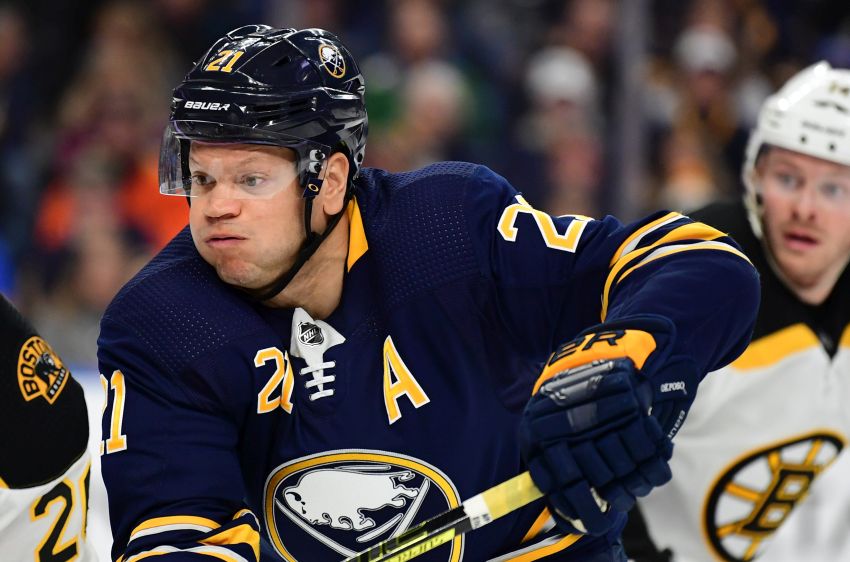 The Sabres winger has a career-long 21-game goal drought entering tonight’s home tilt against the New York Islanders, his old team. The former NHL All-Star hasn’t even mustered an assist in the last 14 contests, the longest pointless stretch of his 12-year career.

Incredibly, Okposo, who usually skates on the second line and power-play unit, is one outing away from a pointless December.

Of course, given the way Okposo’s regular center, Casey Mittelstadt, has been performing – the rookie has compiled just one goal and two points in the last 16 games – Housley is probably doing him a favor.

“I wouldn’t read too much into the lines,” Housley said of Okposo, who has compiled five goals and 15 points in 39 games. “We’re just trying to create balance. I think Larry’s played terrific hockey.

“I just want (Okposo) to get back to focus about his power forward game and going to the net hard, having guys hang on his back. When he does that, he’s really, really effective.”

Larsson has been playing arguably his best hockey since dislocating his elbow and wrist two years ago. The Swede scored short-handed in Saturday’s 3-2 overtime loss to the Boston Bruins, his second goal in four games.

“His play’s been really great,” Housley said of Larsson. “A lot of the things he does you don’t see on the scoreboard.”

Okposo hasn’t scored since Nov. 13, when his second-period goal held up as the winner in a 2-1 victory over the Tampa Bay Lightning.

At that point, 18 games into the season, Okposo was scoring at a 23-goal, 46-point pace over a full year, numbers in line with his career averages.

Since then, he has taken 35 shots without scoring.

Okposo struggled last season, compiling 15 goals, 44 points and a ghastly minus-34 rating in 76 games. Clearly, he never found a groove after a scary concussion he suffered in March 2017 limited his offseason workout regimen.

Six weeks ago, it appeared Okposo’s full summer of work was paying off. But these days, his seven-year, $42 million contract – he still has four and a half seasons left – ranks among the league’s worst.

Buying out Okposo following the season would leave his dead money – hits of up to $5 million – on the salary cap until 2026-27, according to capfriendly.com.

So the Sabres better hope Okposo starts showcasing some of his old scoring prowess.

Housley said the affable Okposo, one of his alternate captains, has handled his struggles well.

“He’s been really providing us some terrific leadership within our locker room, says a lot of the right things and he gives a lot of feedback to our younger players,” Housley said. “He represents everything we want as a Buffalo Sabre.”

Sure, that still helps the Sabres, but how can Okposo bust out of his marathon slump?

“When you go through a difficult time, you just got to fight your way through it,” Housley said. “There’s no easy recipe for it – it’s keep it simple, go to the net hard, things are going to happen.”

Notes: Sabres captain Jack Eichel had a maintenance day Sunday, Housley said. … Goalie Linus Ullmark, who missed Saturday’s game because he was ill, practiced Sunday. The Sabres sent goalie Scott Wedgewood back to the Rochester Americans later in the day. … Former Sabres goalie Robin Lehner could face his old teammates for the first time tonight at KeyBank Center. Lehner posted a 36-save shutout against the Toronto Maple Leafs on Saturday. … Defenseman Lawrence Pilut practiced with Matt Hunwick on Sunday, meaning the rookie could be a healthy scratch for the second straight game. … Okposo had two 18-game goal droughts – in 2009-10 and 2012-13 – earlier in his career.