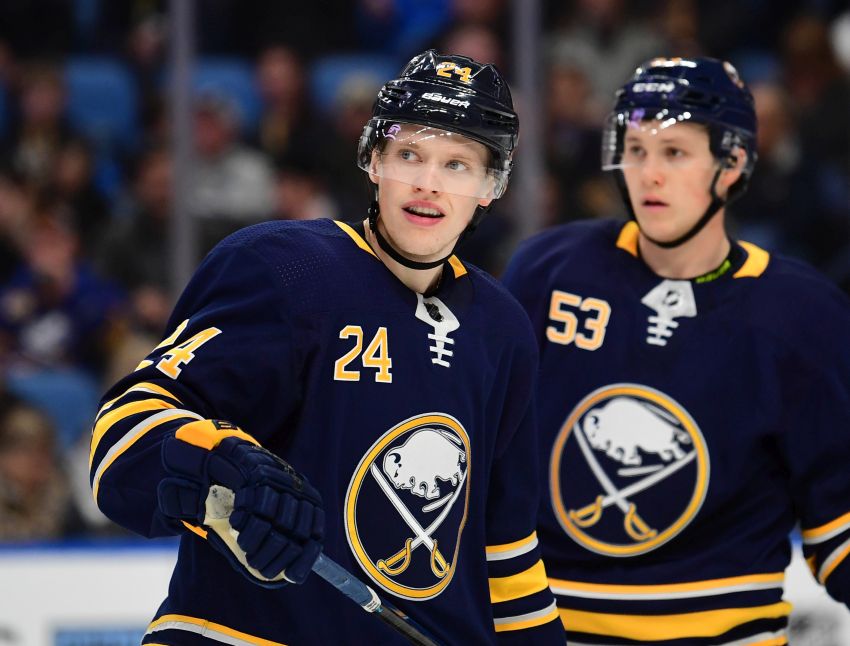 BUFFALO – Every once in a while a prospect like Sabres defenseman Lawrence Pilut comes along. After a short apprenticeship in the AHL – maybe just a few months or less – he arrives in the NHL and stays for good.

For as much as the Sabres and other teams stress development and paying dues, some guys are just ready for the big leagues right away.

Pilut, 22, is just four games into his career. It’s very early. Still, having played five years in the Swedish Hockey League, the slick rookie arrived in North America this season close to a finished product.

The Swede dominated the AHL from the get-go, scoring three goals and 22 points in 16 games with the Rochester Americans.

The play illustrated some of Pilut’s supreme vision, as he spotted a teammate at the net from the left point and unleashed a quick wrist shot.

“I just saw something lingering around the net,” said Pilut, who looked a little shaky defensively against the Flyers. “I felt like I just wanted to get it to the net. Hopefully it would bounce in somehow.”

Eichel said: “He does a great job getting the shot through.”

With three regulars injured, Sabres coach Phil Housley has been relying heavily on Pilut, the SHL’s top defenseman last season, playing him around 20 minutes a game.

Housley said Pilut’s “uncanny creativity” and the “way he attacks the game” has impressed him.

“He has a lot of confidence in himself where when he gets the puck, he commands it and he makes the right decision,” Housley said. “He makes good decisions coming up ice. I think the first game he was really excited to play, I thought he got ahead of the puck at times. But his intentions are all in the right area.”

Most Sabres prospects, of course, spend years developing in the minors. The last youngster who quickly outgrew the AHL was Drew Stafford, way back in 2006-07.

Stafford, then 21, compiled 22 goals and 44 points in 34 games with the Amerks before the Sabres kept him for good.

For the last three games, Pilut has been playing beside Rasmus Ristolainen, perhaps the Sabres’ best defenseman.

“They’re creating some chemistry, they’re reading off each other very well,” Housley said. “Risto had a great game (Tuesday), just jumping in the play in the offensive zone. Pilut just read off him. When it was his turn to go, he attacked the game as well. I really like the chemistry that they’re building.”

Besides recording his first point, Saturday’s game was special for another reason. Pilut’s parents, Diana and Larry, came from Sweden to watch him.

“It would be extra special if we just won,” Pilut said.

Instead of recalling a defense prospect after Casey Nelson suffered an upper-body injury in Tuesday’s 4-3 overtime loss to Toronto, the Sabres summoned Matt Tennyson.

Why Tennyson, 28, over, say, Will Borgen or Brendan Guhle?

“His veteran experience,” Housley said. “We needed somebody more stable back there. He went back, his last game he scored, he was physical.”

Tennyson played his first NHL game since April 2. The Sabres scratched him during his earlier trips to the NHL this season.