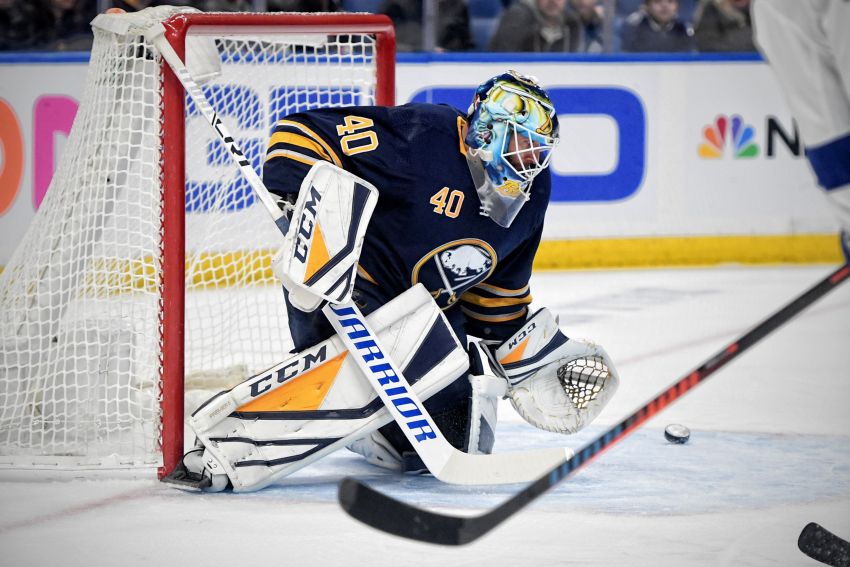 So while Hutton, 32, has enjoyed a solid NHL career tending goal for four teams, he has never really been the guy in the big leagues until this season.

Sure, he played a career-high 40 games as a rookie in 2013-14, but that was mostly subbing for injured Nashville Predators starter Pekka Rinne. Other than that, he has never played more than 32 times.

So this season has been a new experience for Hutton, who signed a three-year, $8.25 million contract July 1 to join the Sabres.

Naturally, Hutton would love to hit the 50- or 60-game milestone.

Hutton prefers staying in the moment, so he’s not concerned about setting a new mark for appearances. Still, the opportunity to be the starter and carry the load “is why I came here,” Hutton said.

“I wanted to play more, I wanted to get an opportunity,” said Hutton, whose 2.09 goals-against average with the St. Louis Blues last season led the NHL. “This presented the best opportunity. … Coming to the NHL level, you never dream of being a backup NHL goalie.”

Transitioning into the starter’s role hasn’t changed much of Hutton’s routine.

“It’s just a matter of in between starts, how I’m managing my output, because you’re still staying in shape,” Hutton said. “But at the same time, I’m not going to stress myself as much about practice and extra conditioning.”

Hutton has morphed into the Sabres’ backbone in recent outings. During their current three-game winning streak, he has been a difference-maker.

In his last eight games, Hutton is 7-2-1 with a 2.16 goals-against average and a .925 save percentage. He was the Sabres’ best player in Tuesday’s tight 2-1 victory over the Tampa Bay Lightning, making 29 saves, including some critical ones in the waning minutes.

Clearly, Hutton’s sound goaltending has instilled confidence in his teammates. He isn’t prone to allowing bad goals like his predecessor, Robin Lehner, often did during his three seasons with the Sabres.

Helping spearhead the Sabres’ transformation – they’re 10-6-2 and have earned at least one point in nine out of the last 11 games – is meaningful to Hutton, who said he wants to be “part of something bigger than just yourself.”

“We’re a team here that’s growing,” Hutton said. “From the way things have been, obviously we want to be part of this turnaround. Just seeing the city get behind us, the crowd was rocking (Tuesday), it was fun. You think of that Vancouver game (Saturday afternoon), everybody was going nuts.”

Before the Sabres eked out Tuesday’s win, they roared back in the final minutes and won a 4-3 shootout against Vancouver and rallied to beat Montreal 6-5 in overtime.

“We’re building confidence,” Hutton said. “I think we’re showing that we can win in all sorts of games, right? We have a big comeback win against Vancouver, and then this game we hold a 2-1 lead for the majority of the game and then we clamp it down with a great third period and we win a game, right? So we’re kind of building different things here.”