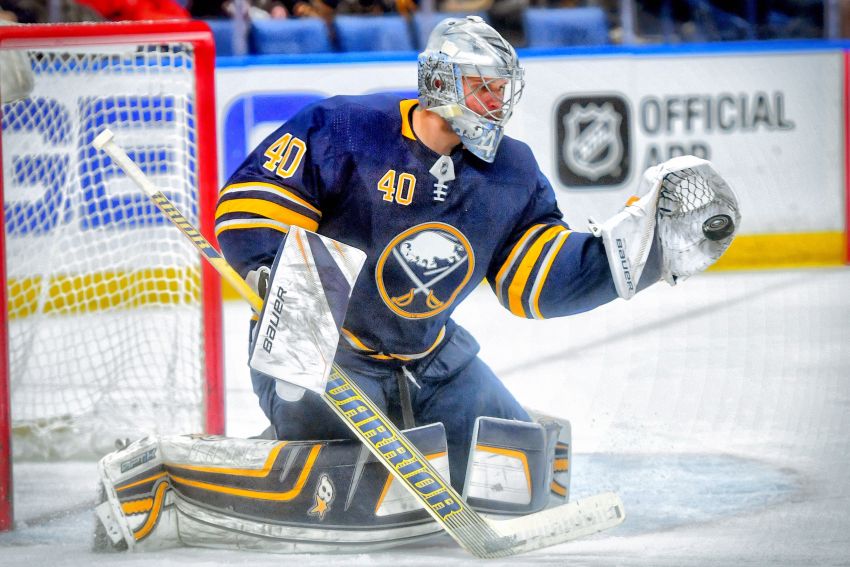 DALLAS – In cutting loose Robin Lehner, the Buffalo Sabres turned over some of their goaltending duties to a youngster with only 26 games of NHL experience.

But the Sabres believe Linus Ullmark deserves a chance to showcase his abilities after a three-year AHL apprenticeship with the Rochester Americans.

Ullmark, 24, has played only six NHL games over the last two seasons. Botterill isn’t even sure Buffalo’s top goalie prospect is ready to handle, say, 30 contests.

“Not at this point in his career, but I think we’re going to give him that opportunity,” Botterill said said inside the W Dallas Hotel before the NHL Draft. “But you have to have expectations.”

So the Sabres must acquire another goalie, perhaps a starter they can utilize 50 or so times. Botterill said he has had trade discussions about adding another netminder.

The Sabres clearly have reservations about Ullmark, who struggled during the AHL playoffs, posting a ghastly 5.50 goals-against average and an .800 save percentage in three April outings.

They could’ve kept Lehner’s rights by tendering him a $4 million offer as a restricted free agent.

The writing had been on the wall the Sabres would part ways. Buffalo’s new regime only gave Lehner a one-year, $4 million contract last summer.

By late last season, when the Sabres recalled Ullmark and started playing him, it was apparent Lehner was no longer in the team’s plans.

The fiery Lehner, 26, spent three years in Buffalo, starting the last two after battling a high ankle sprain in 2015-16. Former GM Tim Murray traded a first-round choice to the Ottawa Senators for him in 2015.

But Lehner performed inconsistently over his 133-game career with Buffalo, only occasionally looking like a top goalie. He frequently called out his team’s play. While he always included himself, that likely rankled some teammates.

Botterill on if the Sabres will pick a goalie when the draft concludes today with rounds two through seven inside American Airlines Center: “You don’t want to force that situation. Obviously, we took one last year with a second-round pick (Ukko-Pekka Luukkonen).”

Botterill said he likes to challenge his scouts every year for a goalie they feel comfortable with taking.

He said drafting a goalie at just 17 or 18 years old is “extremely difficult.”

“You just look at some of the big tournaments … there just doesn’t seem to be that many coming through from that system and that situation,” he said. “It’s a challenge to all of our amateur scouts. It’s easy to look back on and reflect on and say, ‘Oh, you should have taken this guy, that guy, especially evaluating goalies when they’re 17 years old, it’s a difficult situation.”

Botterill on improving the Sabres’ team speed: “Our team has to get faster. It’s bringing players in that can physically skate faster, and it’s also getting the coaching staff and players on the same system to play faster.”

The Humboldt Broncos received the 2018 E.J. McGuire Award of Excellence, named for the Buffalo native and former coach and scouting guru who passed away in 2011.

Sixteen members of the Broncos, a junior hockey team in Saskatchewan, died in a bus crash on April 6.