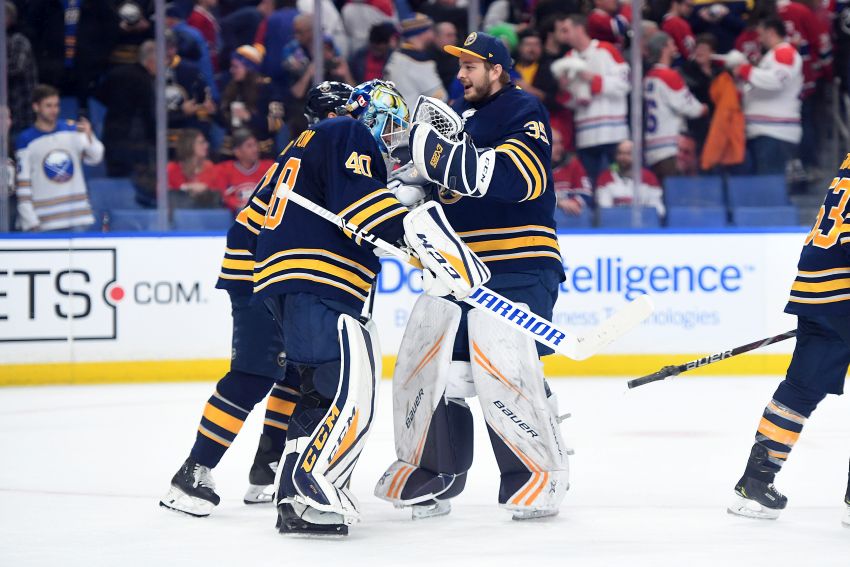 Carter Hutton (40) is greeted by Linus Ullmark after a recent game. ©2018, Micheline Veluvolu

BUFFALO – After earning his 10th win this season, the scorching Sabres will likely turn to goalie Carter Hutton again for this afternoon’s home tilt against the Montreal Canadiens.

Right now, having registered six victories during the Sabres’ seven-game winning streak, Hutton is enjoying a career-best stretch. In his first weeks as a regular NHL starter, the affable veteran has morphed into one of the league’s hottest netminders.

But considering the Sabres also play Saturday in Detroit, goalie Linus Ullmark could also be an option for coach Phil Housley for the Canadiens.

Whatever happens, each goalie will almost certainly receive a start this weekend. Housley should feel comfortable in whomever he chooses.

A lot of factors have contributed to the Sabres’ torrid start and their longest winning streak since opening the 2006-07 season with 10 consecutive victories.

Very quietly, Hutton, 32, and Ullmark, 25, have become one of the league’s best tandems in their first season together.

“We’re two fun-loving guys that don’t take things way too serious,” Ullmark said Thursday inside KeyBank Center. “We know when to relax, we know when to push each other, kind of the same mentality when it comes to hockey.”

Ullmark, meanwhile, has transitioned into the No. 2 role nicely following three seasons as the Rochester Americans’ starter.

While the Swede got yanked from the Sabres’ 6-5 overtime win Nov. 8 in Montreal, the triumph that ignited their streak, he has subbed splendidly for Hutton.

In just two months together, Hutton and Ullmark have developed a strong relationship that has helped them thrive in their new roles.

“You’re around each other a lot, so you get to know each other pretty quickly,” Hutton said. “You obviously have to share that common ground because you’re kind of in your own little world practicing and doing your own drills.”

The goalies have a mutual respect for one another.

“He’s a really good dude,” Ullmark said of Hutton. “That kind of speaks for itself. First of all, he’s a wonderful teammate (to) each and every one of us. That kind of says it all.”

“He’s not like your typical hockey player, a little more outgoing,” said Hutton, who made 23 saves in Wednesday’ 5-2 win over Philadelphia. “He’s funny. … I get along with him really well. He’s got his little quirks and stuff like that, but what I like about him is you know each day what you’re getting with him.

“He’s got an upbeat attitude, he’s really positive and he’s a fun guy to be around.”

What are Ullmark’s quirks?

“Goofy stuff he says,” Hutton said. “He’s kind of a goofball, I think you can tell that from his interviews. He’s quirky in that sense, but he’s such a great guy, so we’re always joking around. …

“We dissect the game well together, too. We analyze each other’s play and help each other out, so it’s always good to have eyes in each other’s corner.”

Hutton, a backup his first five seasons, understands how difficult Ullmark’s job can be. Most NHL goalies play regularly growing up and in the minors.

When they finally reach the big leagues, action can be sporadic.

“What he does a good job (at) is just his preparation in practice, he works really hard,” Hutton said of Ullmark. “I think having me as a partner sometimes you set that example, too, because that was kind of how I learned, too.

“My partner that I played with when I was younger (Nashville’s Pekka Rinne) was a really hard worker. You learn what it takes to play and be consistent at this level.”

Ullmark, of course, respects the dues Hutton paid to reach the NHL. The undrafted Hutton spent four years in the minors and even played 14 games in the ECHL.

“I know where he comes from, I know what he’s been through … and kudos to him, not a lot of people in this world would’ve kept with it and stuck with it for such a long time,” Ullmark said.

He added: “He’s earned every single piece of it.”