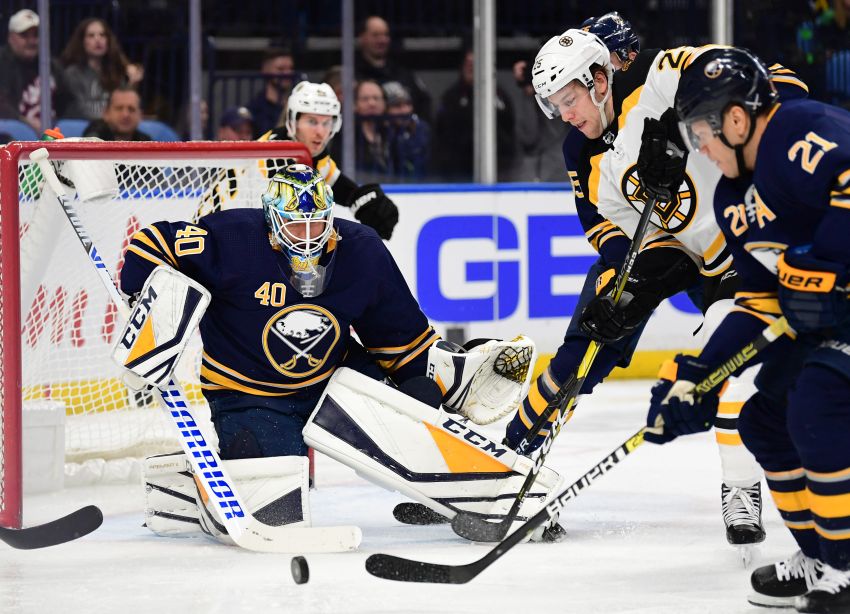 BUFFALO – By about halfway through the third period of Saturday’s 3-2 overtime loss, which inched the Boston Bruins within two points of the third-place Sabres, it appeared officials would let just about anything go.

So when defenseman Rasmus Ristolainen went off for kneeing with the Sabres clinging to a 2-1 lead in the waning minutes, the capacity crowd of 19,070 inside KeyBank Center booed relentlessly.

The fans only got louder after Jake DeBrusk tipped in a shot with 2:29 remaining in regulation, tying the game.

“That was a pretty tough call at the end,” Sabres winger Evan Rodrigues said. “They were kind of letting things go, I thought, from the last half of the third. It’s a tough call and nice tip-in.

“That’s one that got away from us. But at the same time, if we keep playing like that, we’ll win some games.”

That’s the good news for the Sabres, who frittered away a power play in overtime before winger Sean Kuraly buried the juicy rebound goalie Carter Hutton left him at 3:44. While the Sabres lost for the 10th time in 14 games (4-6-4), they played much better than Thursday’s 4-1 loss in St. Louis.

“We played a very strong 60 minutes,” Housley said. “You can’t fault our effort. We attacked the game. It’s going to be like this for the rest of the season where it’s going to be tight. I thought we looked comfortable in the situation. We got opportunities to be up by two but didn’t capitalize.”

The Sabres couldn’t capitalize on an opportunity to distance themselves from the Bruins.

“We didn’t get beat by anything,” said Rodrigues, who assisted on Larsson’s second-period goal. “A guy just got a good stick on it, nice deflection. You probably don’t change anything up when you see that go in.”

Secondary scoring has quickly become the Sabres’ Achilles heel. Beyond the top trio of center Jack Eichel and wingers Sam Reinhart and Jeff Skinner, many guys haven’t been producing offense.

The Sabres have basically morphed into a one-line team in recent weeks, and not surprisingly, they’ve struggled relying on three players so much.

So any contributions from other players are critical. Larsson scored his fourth goal, equaling last season’s total in 47 fewer games. Defenseman Marco Scandella opened the scoring 4:40 into the contest, following up the play and burying Skinner’s rebound.

“It was great,” Housley said of the secondary contributions. “You could feel it on our bench. It provided a lot of energy for us.”

The Bruins won their first game this season when trailing after two periods, improving to 1-11-1. The Sabres, meanwhile, feel to 10-1-3 when leading after 40 minutes.