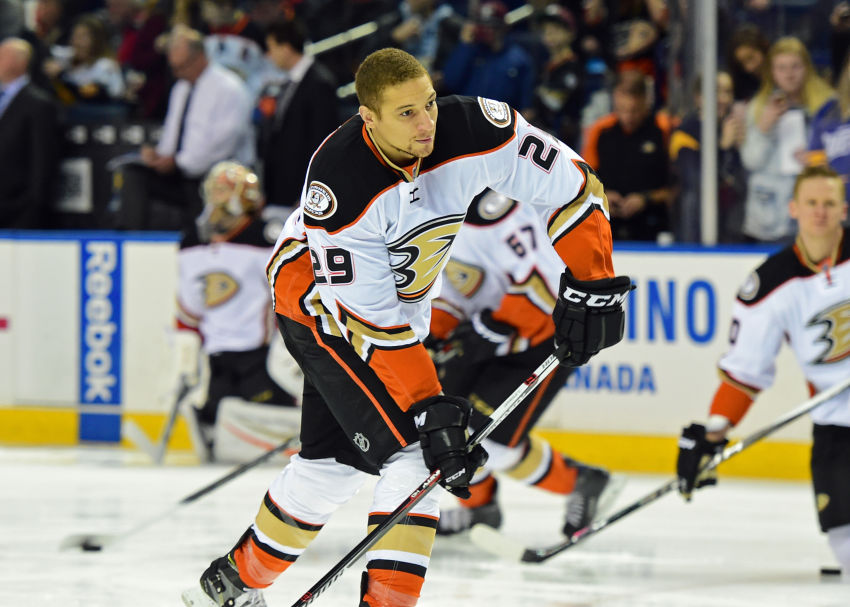 BUFFALO – Former Sabres winger Chris Stewart jogged his memory a little, all the way back to last season, the most tumultuous of his eight years in the NHL.

“What was the phrase they were using,” Stewart asked Wednesday after his new team, the Anaheim Ducks, practiced, “‘Tank for McEichel?’”

Yes, that’s the correct one, Chris.

Coming to the rink every day quickly became a difficult experience for Stewart in 2014-15. He learned firsthand winning wasn’t the highest priority for the rebuilding Sabres, who finished last and landed the second overall pick, which they used to draft center Jack Eichel.

“I think that was the hardest part, just thinking that,” Stewart said about losing. “Guys are coming in thinking that. Everyone was thinking that. (They) wanted to come in last place when guys were really coming in and competing and wanting to win games and working hard.”

But that was only one part of Stewart’s unhappiness. As an upcoming free agent, he knew the Sabres, who acquired him in February 2014, planned to deal him prior to the March 2 trade deadline.

“Nothing worse than coming to work every day and you know it’s just a matter of time before you get traded,” said Stewart, who played in the Ducks’ 3-0 loss to the Sabres on Thursday inside the First Niagara Center.

Stewart, 28, tried to shrug everything off and not wear his problems on his face.

Naturally, Stewart’s play suffered. He became a healthy scratch. Of course, like he has in his other NHL stops, he teased, scoring some goals only elite power forwards could pull off. He started playing better around Christmastime following a heated argument with former coach Ted Nolan.

“By the end, it comes down to trade deadline, it’s February, I’m minus-30,” Stewart said. “So now you’re at the point where you think no one wants you.”

Still, Stewart, who had 11 goals in 61 games with the Sabres, performed well enough that the Minnesota Wild sent a 2017 second-round pick for Stewart.

Winning games with Minnesota had Stewart “feeling like a kid again,” he said.

“It was refreshing, it was fun,” he said. “It was just fun coming to the rink every day playing meaningful hockey games.”

Stewart played 28 total games with the Wild, including eight playoff contests, scoring three goals. But an inconsistent season cost him millions on the open market.

He signed a one-year, $1.7 million deal with Anaheim on July 12. In mostly a fourth-line role, Stewart had five goals entering Thursday, tied for third on the Ducks.

“He’s been good,” Ducks coach Bruce Boudreau said. “He’s energetic on the bench. He’s scored some clutch goals for us. He’s fought some big guys, succeeded in the fights and done well.”

Stewart added: “I think the style of game they play, I think that’s right up my alley – they’re a strong, fast, physical team.”

For all the turmoil Stewart endured with the Sabres, he still has some happy memories.

“I liked Buffalo,” he said. “My kids were born here. I lived here in the offseason. Great relationships. The trainers were great. The ownership was great. It was honestly one of the classiest organizations that I played for. So it’s good to see that they’re building in the right direction this year, they’re starting to turn around.”

When O’Reilly, the older brother of Sabres center Ryan O’Reilly, appeared in his first NHL game since Feb. 15, 2012 on Tuesday, it marked the first time they had played together in a regular-season NHL contest.

“For a family and for us to get a chance to play in a National Hockey League game together, it’s pretty special,” Cal O’Reilly said. “Not many people can say they played with their brother in the NHL.”