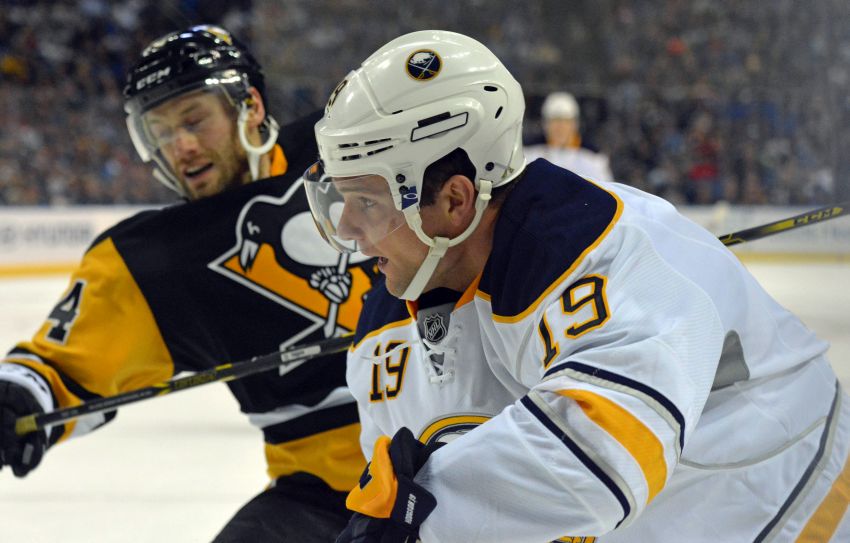 BUFFALO – Nothing could ignite Sabres enigma Cody Hodgson. Not moving from wing to center and back. Not switching lines. Not getting scratched.

In the worst season by a Sabres forward not named Ville Leino in recent memory, Hodgson mustered only six goals and 13 points in 78 games, a stunning 14-goal, 31-point drop in six more appearances.

Instead of a breakout season, Buffalo’s leading scorer in 2013-14 morphed into one of the NHL’s biggest disappointments.

“This is by far the worst years just I’ve had in my whole life, not just in just in a National Hockey League year,” Hodgson said Sunday inside the First Niagara Center as the Sabres cleaned out their lockers following a 30th-place finish. “I can’t explain what happened or what happened in more than one instance.

“It wasn’t just one time. It was consistently, whatever is was, missing opportunities, saves, bad luck – whatever you want to call it. I’ll be much better next year.”

Will Hodgson even be back next season? The 25-year-old just finished the second season of a six-year, $25.5 million contract. A player under 26 can have his contract bought out for one-third the remaining value.

Despite the recent struggles, Hodgson wants to return.

Clearly, Hodgson couldn’t mesh with former Sabres coach Ted Nolan, who was fired Sunday. Nolan often seemed mystified by Hodgson’s sudden decline. Murray, who won’t have an end-of-season news conference, might want to give Hodgson another chance under a new coach.

Late last season, Nolan switched Hodgson to the wing to keep him on the top two lines. Hodgson responded, closing the year with four goals and eight points in the final nine games. Hodgson then starred for Team Canada at the world championship. Canada didn’t even invite him to the tournament this season.

He briefly switched back to center early this season before settling on the wing again, usually as a third- or fourth-liner. Nolan also scratched him four times.

The trying season sapped his confidence.

“Right now, it’s not too high,” Hodgson said. “But mentally, that can change over the summer from working hard and doing what I did to get me to this level.

Hodgson, whose shooting percentage dipped from 11 percent to 4.7, said Sunday he prefers playing center but has no problem skating on the wing.

“My game really can’t change,” Hodgson said. “It doesn’t matter who I’m playing with or what I’m playing, it’s got to be the same way. I struggled with consistency. But overall I just need to just make sure my game’s on par and not worry about anything else.”

With the season mercifully over, Hodgson plans to refresh his mind.

“Obviously, personally, individually, as a team, (it) just wasn’t a success – and that’s tough on anybody, takes a toll on you all through the year,” he said. “Take a break and then come back and look at it and make sure you learn from this year.”

Top Sabres prospect Sam Reinhart will make his AHL debut tonight with the Rochester Americans as a right winger, according to reports. Why? The Amerks have a glut of centers.

The NHL has announced top prospects Connor McDavid, Noah Hanifin and Dylan Strome will attend Saturday’s draft lottery in Toronto. Jack Eichel, the likely No. 2 pick, won’t attend because of a family commitment, according to the Buffalo News.

The Sabres have the greatest odds, just 20 percent, of getting the consensus No. 1 pick, McDavid.