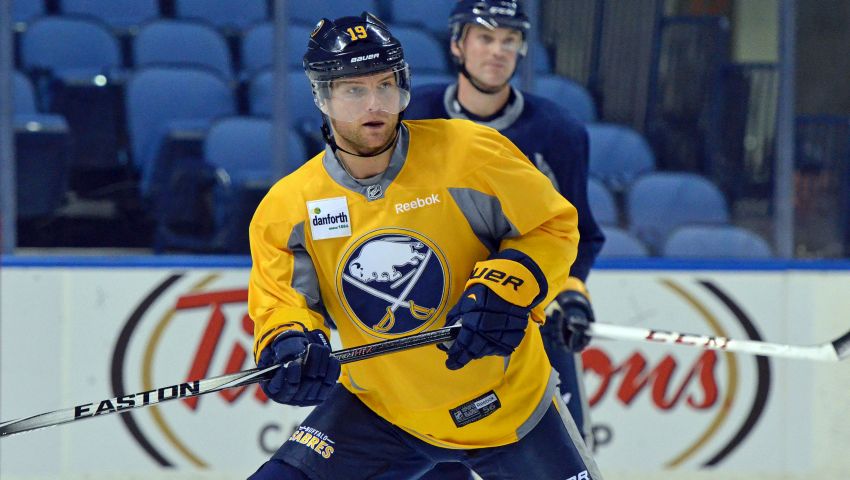 BUFFALO – Just under 11 minutes into Saturday’s 3-2 loss in Florida, Cody Hodgson grabbed a loose puck in the corner and beat a Panthers defender along the wall. The Sabres center then cut to the middle and fended off two more Panthers before deftly feeding Drew Stafford, who one-timed the perfect pass in the net from the left circle.

“For him to have that vision to make a play like that, just goes to show you what kind of skill he has,” Stafford said Monday. “Those are the type of plays we expect out of him.”

Hodgson’s slick play, one of the Sabres’ prettiest assists all season, was the struggling 24-year-old’s first point since scoring his only goal Oct. 25, an 18-game stretch. It was his first assist since Oct. 14, a 23-game stretch.

Incredibly, 27 games into the season, Hodgson has one goal, three points and a minus-11 rating. For some perspective, stay-at-home defensemen Tyson Strachan and Mike Weber each have four points.

Hodgson’s scoring at a stunning three-goal, nine-point pace entering tonight’s tilt against the Los Angeles Kings inside the First Niagara Center. His shooting percentage is 2.9 percent.

No one wearing blue and gold has been a bigger disappointment than Hodgson, who’s in the second season of a six-year, $25.5 million contract.

“We all know he can do it,” Sabres coach Ted Nolan said. “It’s just a matter of doing it. It’s one thing with talking about it, but getting in those areas where goal scorers have to go to, there’s a certain price you have to pay.

“He’s getting there. He’s getting a lot closer, and in return he’s starting to play a little bit better.”

There are some positive signs.

Nolan rewarded Hodgson last Tuesday – a hunch he called it – by using him in the shootout, and he scored the winner in the Sabres’ 2-1 triumph against Tampa Bay. Hodgson, perhaps one of the NHL’s worst defensive forwards in recent seasons, has an even or plus rating in 11 of the last 14 games.

“I think it started even before (the shootout), just realizing that you go out every shift and try hard, and if you can’t contribute offensively, you can contribute other ways,” Hodgson said.

At times, Hodgson’s career-worst stretch has given Nolan fits. Nolan was visibly agitated in late October talking about the underachiever’s demotion to the fourth line. For now, Hodgson, who has played both center and wing this season, has avoided being a healthy scratch.

What has been Nolan’s message to Hodgson?

“Ted just wants me to get back to playing the way he knows I can play, and that’s creating opportunities, being hard on the forecheck, being physical and playing an all-around game,” Hodgson said.

Of course, Hodgson still has time to salvage the season. Stafford understands his plight. A year ago at this time, the winger had two goals. He didn’t score his third until Dec. 19, his 35th game. He finished with 16 scores.

“I think it’s sticking with it,” Stafford said. “It’s one of those things where the harder you try, the more you think, the worse off you’re going to get. You need to do your best to make sure you keep your head clear, stay away from the negativity – ignore the noise, ignore the external stuff and just focus on what got you to this level.

“For him, it’s obviously his skill. But he’s the most effective when he’s engaged and he’s initiating. I think that play (Saturday) is a perfect example. He wins the race to the puck, he takes the puck out of the corner, he makes a skill move and makes a great pass.”

Nolan knows it could take some time for Hodgson to get going.

“You look at a lot of goal scorers in the past, I was speaking to Danny Gare the other day,” Nolan said last week about his former teammate in Detroit. “He didn’t score for the first 12, 14 games, he said. He said he ended up scoring 50. Goal scorers, when it comes it comes, and Cody’s got some special hands. When it comes, it’ll come.”