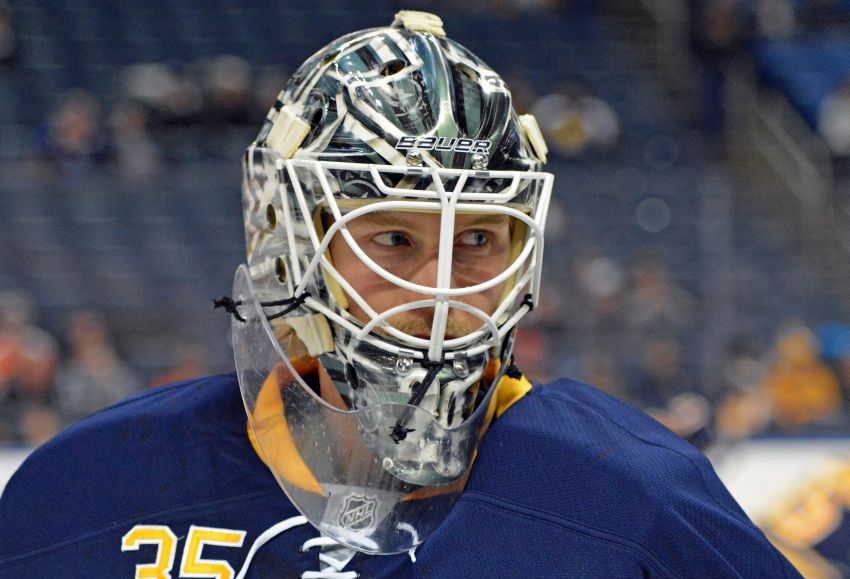 BUFFALO – Many figured goalie Anders Lindback would play a few games, contribute to the Sabres’ push for the No. 1 draft pick and quietly leave following the season.

Lindback, after all, was just a body the Sabres received from the Dallas Stars when they dealt goalie Jhonas Enroth. They needed someone for practice and to dress for games, right?

Statistically, the 26-year-old Lindback was perhaps the NHL’s worst goalie upon his arrival Feb. 11. The tank brigade saw his awful .875 save percentage and a 3.76 goals-against average and clamored for him to play right away.

Within weeks, after the Sabres traded Michal Neuvirth and newcomer Chad Johnson was injured, the same fans who wanted Lindback in net were sweating out his starts.

The 6-foot-6 Swede was suddenly stealing wins for the rebuilding club.

In a miserable season, Lindback became one of the Sabres’ feel-good stories down the stretch, morphing from a spare part into a strong starting goalie. Facing a ridiculous 34 shots a game, he posted a .924 save percentage and a 2.76 goals-against average in 16 appearances (15 starts).

“I think I proved to myself and everybody I can play in this league,” Lindback said Sunday as the Sabres cleaned out their lockers following a 30th-place finish. “But I still think there’s room for improvement. I still think I can do better. I think I will, too.”

How did he transform his game so quickly?

“The biggest reason, I got to play,” said Lindback, who played only 10 games with Dallas.

Lindback’s opportunity likely would’ve never materialized if Johnson, who was acquired from the New York Islanders in the Neuvirth deal, didn’t sprain his ankle hours before he was scheduled to start March 6.

“Unfortunately for Chad, he got hurt,” Lindback said. “It really opened a window for me to get playing time. I think that’s what’s been missing for me – playing, getting into a rhythm. It was a long time ago I got to play this much. I’ve just been feeling more comfortable for every game that’s passed.”

Lindback, an unrestricted free agent this summer, could have a future with the Sabres, who must find a starting goalie. Johnson, a career backup, has one year left on his contract. But the Sabres don’t have any other NHL-ready goalies in the organization.

Sabres general manager Tim Murray loves big netminders. Lindback, despite some limited success, could be a cheap and low-risk option. His save percentage with the Sabres would’ve ranked sixth in the NHL if he had enough action to qualify.

“It’s only been 15 games,” Lindback cautioned.

Lindback wants to stay. He believes the Sabres can things around after a wretched season.

“Obviously, this is a thing I do want to be a part of,” Lindback said. “You never want to be last overall. I know that’s not going to be the case the next couple years in this organization. But for me, obviously, I want to be somewhere where I can get a chance. I really, really like it here. I like the people, everything about it. It’s just the part of winning. I think that’s going to come.”

His teammates’ tenacity after the Sabres sold off assets prior to the March 2 trade deadline impressed Lindback.

Clearly, Lindback was playing for his NHL career the last two months. A poor run might’ve forced him to go to the minors or even back to Europe. But Lindback refused to approach his starts like he was playing for his future. Now, he could have some suitors this summer.

“I just try to approach every game the same all year and I just try to go out,” he said. “You can’t really think too much about what’s going to happen. I only try to focus on the next puck and the next shift. … If you start to think like that, I think it going to affect badly on you, especially if you have a bad game.”