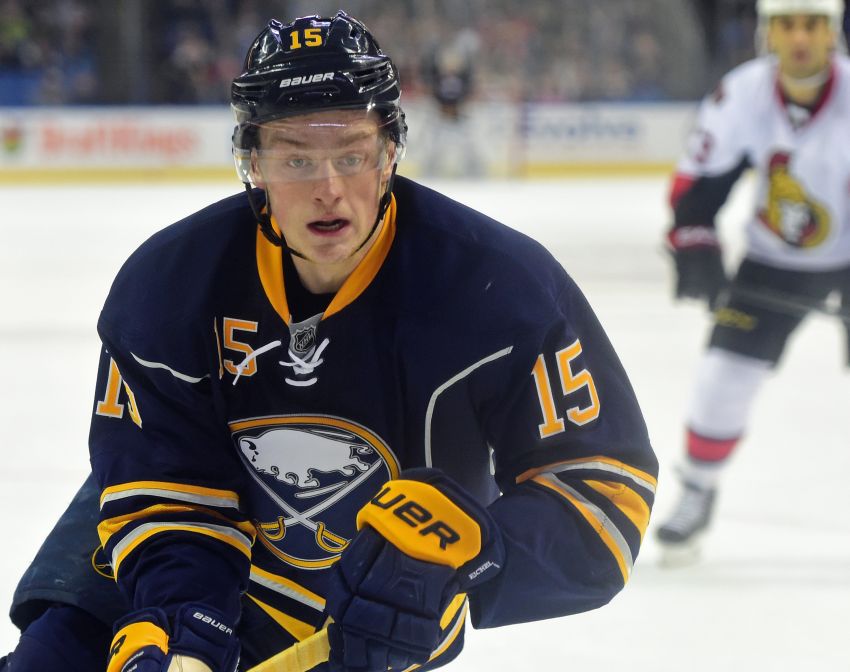 Then there was Sabres rookie Jack Eichel’s rugged, zig-zagging empty-netter that sealed Tuesday’s 3-1 road win against the New Jersey Devils.

“It was a battle royale from the blue line in,” coach Dan Bylsma told reporters in Newark following the Sabres’ third straight win.

With just under a minute left, Eichel, 19, pounced on a loose puck above the left circle while fending off Mike Sislo. The center couldn’t coral the puck, so he cut across the slot and chased it down bumping with Sislo as it squirted away.

Eichel finally gained control for a split-second and shot it at the bottom of the right circle as Sislo fell down and David Schlemko hit him.

“I almost turned away from it a couple of times,” Bylsma said.

But observers rarely turn away when Eichel, who regularly generates excitement from seemingly mundane plays, is involved.

Eichel began delivering the wow factor before training camp started, dazzling during the team’s rookie tournament. He immediately carried that into the regular season, scoring in his NHL debut.

Still, for all the natural talent and flash Eichel possesses, he likely wouldn’t be scoring so much without a commitment to playing defense and becoming an all-around presence. The complexities of the modern NHL demands everyone must play a hard, smart game away from the puck.

Eichel, of course, is still raw. While plus-minus has been given less importance in the advanced stats age, he’s a minus-13. Only two rookies have a lower number.

But Eichel earning ice time late in a one-goal game like he did Tuesday illustrates the trust Bylsma has in the youngster.

“When we review Jack’s game with him, (there are) huge and clear areas of improvement in his defensive play, how he plays defense and his positioning and how aggressive he is playing defense,” Bylsma said recently.

When Bylsma coached Eichel as an assistant with Team USA at the world championship 10 months ago, he “kind of played defense standing up in the middle of the ice,” Bylsma said.

“He’s significantly better and more aware defensively, being aggressive on the puck and playing aggressively with his skating, which is a big asset for him,” Bylsma said. “He’s used it much better playing defense.”

So where has Eichel improved the most defensively?

“I would say below the top of the circles in our own zone, just helping the defensemen break the puck out and supporting the guys around the ice,” Eichel said recently.

Eichel was cognizant from the get-go he needed to round out his game – “I don’t think it could’ve got any worse,” he said about his defense – and quickly became a “sponge” for learning, Bylsma said.

“He’s paid a lot of attention to it off the ice and looking and knowing areas he can get better at and work to get better at, and that’s a great thing to have in a great player,” Bylsma said. “He’s a young player, but certainly has the attributes to be great, and one of those is that he wants to grow and get better at his game.”

How much have the Sabres improved on the road this season?

With Tuesday’s win and Saturday’s 4-3 triumph against the New York Rangers, they’re 18-17-5. Incredibly, the Sabres went 17-59-6 on the road in the previous two seasons!

“We’ve been able to do it on the road in some tough places. I think our record should be better on the road.”

They have also lost some close road tilts late.

The Sabres, who had Wednesday off, are 7-2-2 overall in the last 11 contests. Two games are left this season, starting with Friday’s home finale against Columbus.

The Sabres assigned winger Justin Bailey, 20, back to the AHL on Wednesday morning. The Williamsville native was summoned on an emergency basis and didn’t play Tuesday.

Bylsma said Saturday the Sabres will possibly recall some players from the Rochester Americans for their weekend games.