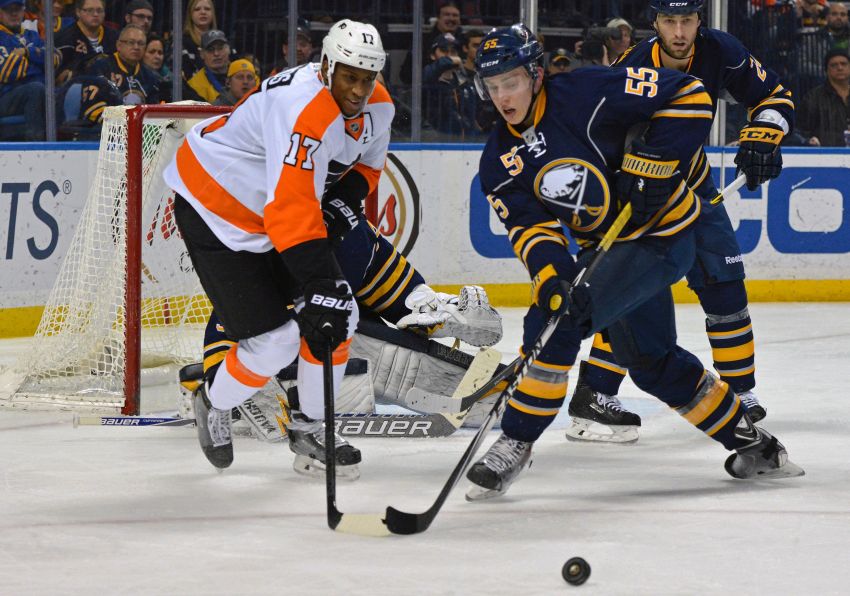 BUFFALO – It was March 14, and Zach Bogosian’s injury had suddenly left the Sabres short-handed. Coach Ted Nolan needed a defenseman to fill the newcomer’s big minutes, so he turned to 20-year-old Rasmus Ristolainen, one of his top prospects.

At times, Ristolainen’s second NHL season had been a rough ride. He had already been playing 20 minutes many nights. Why add more to the youngster’s plate?

Nolan wanted to see how Ristolainen, the No. 8 pick in 2013, would handle additional responsibilities.

“Certain guys grab the reigns when they’re given a ride, and some guys choke up a little bit,” Nolan said Thursday inside the First Niagara Center. “It all has to do with their personalities. But I think Ristolainen’s one of those kids, he seems a little bit more mature than his age. He’s really grasped it and he wants to be a real good player.”

The Finn had four goals and nine points during one recent nine-game stretch, including a three-assist outing and a goal in three straight contests. After Bogosian went down, Ristolainen skated more than 28 minutes in three consecutive games and never fewer than 24.

“Someone had to step up, so I kind of saw a good chance there,” said Ristolainen, who has eight goals and 20 points in 76 games, all team highs for defensemen. “I’ve got a lot of ice time, so I guess it started from there.”

For Nolan, Ristolainen’s maturation started almost a year ago, when he arrived at summer development camp looking svelte, having shed about 30 pounds from his 6-foot-4 frame. The Sabres now list him at 219 pounds.

“You could tell his transformation with his body, the amount of work he did in the offseason,” Nolan said. “He came here not just with the mission of doing well; he came here with a mission of making this team and stepping right in, and it started right from there.”

Still, Ristolainen, as his awful minus-30 rating illustrates, struggled badly for months. His rating ranks 865th in the NHL. Only four players have a worse one.

“He still had his moments,” Nolan said. “He’s 20 years old. To play the minutes he’s played and the situations he’s played, he had a great opportunity here, and he took advantage of it. So he’s going to get better and better when he’s 24, 25, 26, 27. That’s when you’re really going to see the real one. But watching the process every day is going to be a treat.”

“Of course, if I would have played 25 minutes throughout the whole year, there is some tough, tough time, for sure,” Ristolainen said. “But for the next years I just (got to) try to keep the level pretty much the same, that’s there’s no too much up and down.”

If the struggles bothered Ristolainen, he never let on.

“He’s a pretty quiet person, so I don’t think it rattles him very much, and if it does, he doesn’t show it,” Bogosian said. “He hides it really well.”

Bogosian, the No. 3 pick by the Thrashers in 2008, understands Ristolainen’s plight well. He also cracked the NHL as an 18-year-old just months after the draft. Playing in Atlanta, a market that received scant attention, helped him.

“I think everyone handles it differently,” Bogosian said. “I was fortunate where I wasn’t under the microscope every day. But it’s something with Rasmus, he’s a good young player. He’s going to have ups and downs like every other player. Those might be a little more magnified than maybe some of the other guys just because he’s so young. I think he’s handled it really well.”