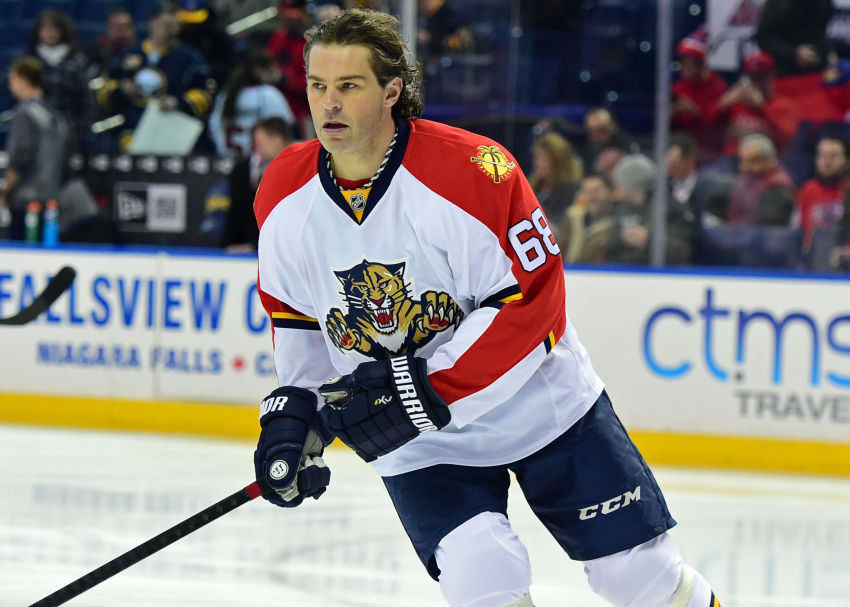 BUFFALO – Late Monday, around 10:30 or 11:30 p.m., as many of his Florida Panthers teammates were probably turning in for the night, 43-year-old Jaromir Jagr was allegedly inside the First Niagara Center working out.

“Our cameras caught him,” Sabres coach Dan Bylsma said Tuesday prior to Jagr’s 87th career appearance against Buffalo, a 5-1 Panthers win in which the Czech scored his 736th NHL goal.

As Jagr has grown older, his legend has only increased. He’s leading the upstart Panthers in scoring halfway through his 22nd season.

“It amazes people how he does it,” Panthers coach Gerard Gallant said.

To compete against men a little more than half his age in today’s ultra-competitive NHL takes a special kind of dedication. That’s why Jagr has become a workout fiend.

Jagr, who was recently voted into the NHL All-Star Game, mostly makes his linemates look good. The winger has 14 goals and 29 points in 37 games. He scored 9:45 into Tuesday’s contest and had both goals in Sunday’s 2-1 win against Minnesota, the Panthers’ ninth straight victory.

The Panthers, a perennial dreg, have vaulted to the top of the Atlantic Division thanks to a strong mix of veterans like Jagr, former Sabres defenseman Brian Campbell, goalie Roberto Luongo and young stars like center Aleksander Barkov and defenseman Aaron Ekblad.

The veterans, Gallant said, are “the key to our hockey team.”

“They run the dressing room,” he said. “We got a lot of good veterans, character guys. They take care of the young players.”

No one in the NHL is more experienced than Jagr. He has 45 goals and 103 points against the Sabres in his career. His careers numbers are staggering. He’s fourth all-time in goals, sixth in assists with 1,095 and fourth in points with 1,831 points in 1,587 games.

“It’s amazing kind of what he does at that age,” Campbell said. “He’s so dedicated to the game. As he says, this is what he has, this is all he has and he enjoys it. I can see him keeping going.”

What kind of numbers would Jagr have if he didn’t lose more than two full seasons to lockouts or spend three years in the KHL?

Jagr played his first game in Buffalo at Memorial Auditorium as a rookie with Pittsburgh on Oct. 19, 1990, a 4-4 tie – remember those? – in which he had a goal and two points.

“I remember the old rink,” Jagr said. “I hated that noise when they scored a goal.”

Fog horn aside, Jagr, as his statistics indicate, feasted on the Sabres early in his career.

Then Jagr quickly changed his thought.

The Amerks play three games in three days this weekend, so Lehner might start two of them. Bylsma also said Lehner would be with Rochester next Wednesday.

The Sabres made one lineup change on defense against the Panthers, inserting Carlo Colaiacovo, who had sat out 11 straight contests, for Mike Weber. Colaiacovo hadn’t played since Dec. 7.

“Extremely difficult, obviously,” Colaiacovo said about being scratched. “It’s not always fun when you’re watching. You play the game to play the games and be a competitor. Unfortunately, it wasn’t the case lately. You try to do that, keep yourself sharp, practice good habits for when the opportunity comes back.”