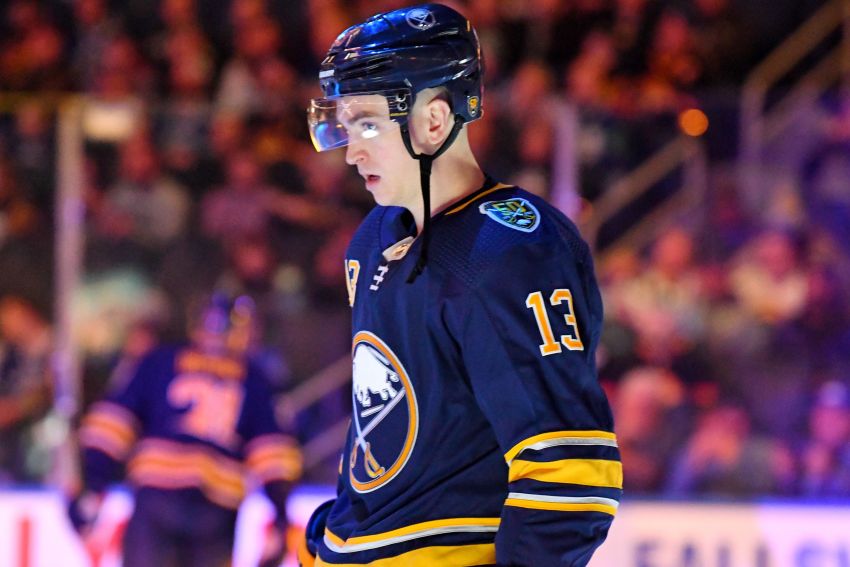 BUFFALO – Forget about Jimmy Vesey’s slow start. Since the Sabres winger registered his first goal Nov. 25, he has scored nine times in 37 games.

Over a full season, that’s a 20-goal pace. Vesey, 26, has saved his best hockey for the past few weeks, performing more like the player the Sabres likely envisioned when they traded the New York Rangers a third-round pick for him.

The Harvard product has also evolved into a reliable checker and penalty killer, earning trust from Sabres coach Ralph Krueger.

“That’s one of the things when he came in here, we thought there were some deficiencies there without the puck,” Krueger said prior to Saturday afternoon’s 5-2 win in Pittsburgh.

But Vesey, Krueger said, has embraced the way the Sabres want to play defensively.

“His offensive confidence has grown, and if he keeps moving and he keeps his big body and his feet moving, he’s a dangerous player,” he said. “He’s a good player defensively as long as he’s doing that. We really like the way he’s evolved here in the last few weeks.”

Vesey, an unrestricted free agent following the season, could be in demand as a rental player as Monday’s trade deadline approaches.

So if the Sabres deal Vesey, perhaps he can fetch them a high pick – basically get back what they gave up for him – or a decent prospect.

Vesey is one of seven Sabres set to hit the open market. Some of them – center Johan Larsson, for example – they would be wise to keep.

There’s a chance Sabres general manager Jason Botterill could move one or two of them before 3 p.m. Monday.

Here’s a look at the rest of the notable Sabres who will become UFAs:

The Sabres acquired Frolik, 32, and his $4.3 million cap hit from the Calgary Flames on Jan. 2 in exchange for a fourth-round pick.

Given his experience – the 12-year NHL veteran won the Stanley Cup with the Chicago Blackhawks in 2013 – a contender might be interested in adding the Czech for the stretch run.

Frolik’s defensive abilities and smarts have helped the Sabres. In 16 games, however, he has scored just one goal, an empty-netter.

“He had gotten away from being confident with the puck,” he said. “But without the puck, he just continually does the right things. He goes to the right spaces. He gave our penalty kill a completely different feel to it since he’s been here. His ability and willingness to block shots and his reads defensively are outstanding.”

Frolik returned Saturday against the Penguins.

Considering the Sabres selected Girgensons 14th overall in 2012, it can be argued he has never lived up to expectations.

But the Latvian has established himself as a tenacious and reliable checker. He can also contribute offense. He has scored 11 times this year, his highest total since scoring a career-high 15 goals in 2014-15.

Girgensons, 26, has anchored left wing beside Larsson and winger Kyle Okposo nearly all season, helping the line become perhaps the Sabres’ sturdiest and most reliable.

If the Sabres trade Girgensons, it would be difficult to replace him, especially at his price, just $1.6 million.

Much of Larsson’s seven-year career in Buffalo has been disappointing. Still, the Swede has enjoyed perhaps his best NHL season.

Centers are always a precious commodity, and the Sabres sorely need them.

Like Girgensons, Larsson, 27, is a gritty checker capable of producing offense. He also earns only $1.55 million.

This season, he has endured goal droughts of 19 and 13 games and even became a healthy scratch.

It’s hard to imagine the Sabres re-signing him.

But Sheary won two Cups with the Penguins. He has a 23-goal season on his resume. A contender might want him.