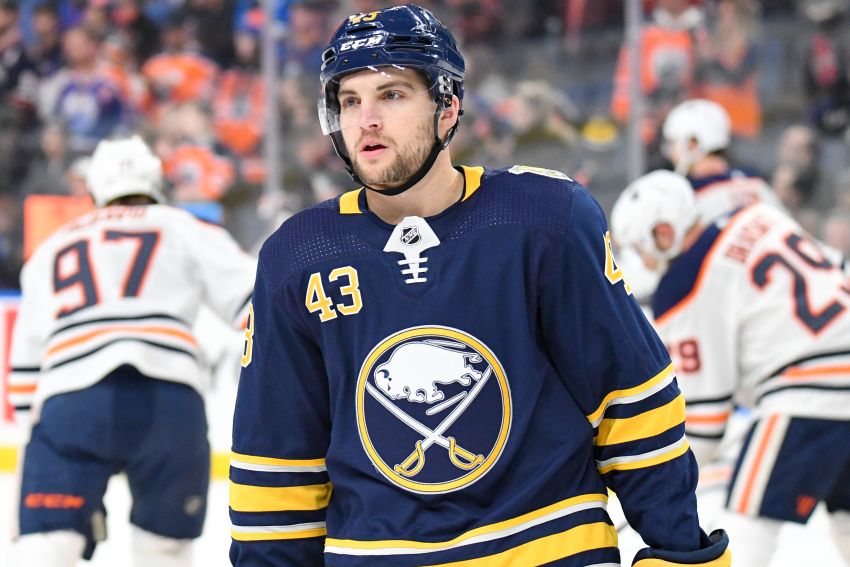 BUFFALO – In the near future – perhaps through a trade this month or as a free agent following the season – winger Conor Sheary will likely leave the Sabres, ending his disappointing two-year run here.

Sheary, 27, has struggled throughout his 124-game career with the Sabres, battling long slumps and scoring only 21 goals. He was even scratched three times in December.

Having scored 48 goals and earned two Stanley Cup rings over his first two and a half NHL seasons, Sheary arrived from the Pittsburgh Penguins with a track record of producing offense and winning.

But like so many players the Sabres have acquired over the last decade or so, he started struggling once he arrived in town.

Sheary has a 10-game goal drought entering Thursday’s contest against the hapless Detroit Red Wings at KeyBank Center. The Sabres, meanwhile, have lost three of their last four outings.

“It’s definitely frustrating not only that I’m not having personal success, I think the team is in a bit of a lull right now,” Sheary said following Wednesday’s practice. “You want to do what you can to get the team out of it, but you can only do your own part. I think as individuals throughout our lineup, I think if we get back to that, we’ll be a more consistent team.”

Consistency has dogged the 5-foot-8, 179-pound Sheary with the Sabres.

After scoring two goals Oct. 3 in Pittsburgh, opening night, he mustered just one over his next 22 games. Following another two-goal performance Dec. 2 against the New Jersey Devils, Sabres coach Ralph Krueger benched him eight days later.

Sheary scored twice over a three-game stretch in early January before sputtering again.

Krueger said he wants Sheary, who played a season-high 20 minutes, nine seconds Tuesday, “to be a spark plug and a ball of energy for us.”

“When he’s doing that, he adds to our game and his offensive production seems to be a byproduct of that,” he said. “At the moment, he might be thinking here and there too much about the offense and not just doing the gritty work and the hard work.

“We saw that coming now, lately again. I’m sure the goals will follow if he keeps on that track.”

That’s partly why Sheary received a massive bump in ice time – he hadn’t played that much since since the 2016-17 season – in the Sabres’ ugly 6-1 loss to the Colorado Avalanche. In the previous game, Saturday afternoon’s 2-1 overtime win against the Columbus Blue Jackets, he skated just seven minutes, 56 seconds.

“It was a big jump,” Sheary said of his playing time. “I don’t know, it’s just kind of how the game went, I think. Once we kind of lost it in the third there I think we were just rolling lines and got everyone into the game. With the 11 forwards, I happened to get a few more shifts. But, yeah, that was a big spike, that was different.”

The diminutive Sheary knows he must play tenaciously to generate opportunities.

“I’m not a guy who’s going to kind of score a flashy goal or dangle someone or score that way,” said Sheary, who scored six of his 14 goals last season in the first 16 games. “I’ve probably scored 90% of my goals from within 10 feet of the net, so I think I just have to get back to getting to those dirty areas, and gritty I think is a good word.

“Sometimes when you’re not scoring for a while, you try different things. But I think getting back to basics and what made me successful I think is important moving forward.”

If Sheary starts scoring, the Sabres could move him before the Feb. 24 trade deadline. Despite his inconsistent play, he could be in demand.

The UMass product has already played 57 NHL playoff games and possesses the talent to play on scoring lines.

But Sheary doesn’t want to think about his future.

“You just try to have a small-picture focus,” he said. “I think I’m just going to worry about this game and helping this team right now. I don’t want to look too far forward or get too far ahead of myself. I think if you’re not living in the moment, it’s going to be a long year and a long season. I think right now, we’re focused on the next game, and that’s my focus as well.”

Behind The Bench w/@BillHoppeNHL: Discouraged #Sabres fans speaking out https://t.co/3YKjliqE98