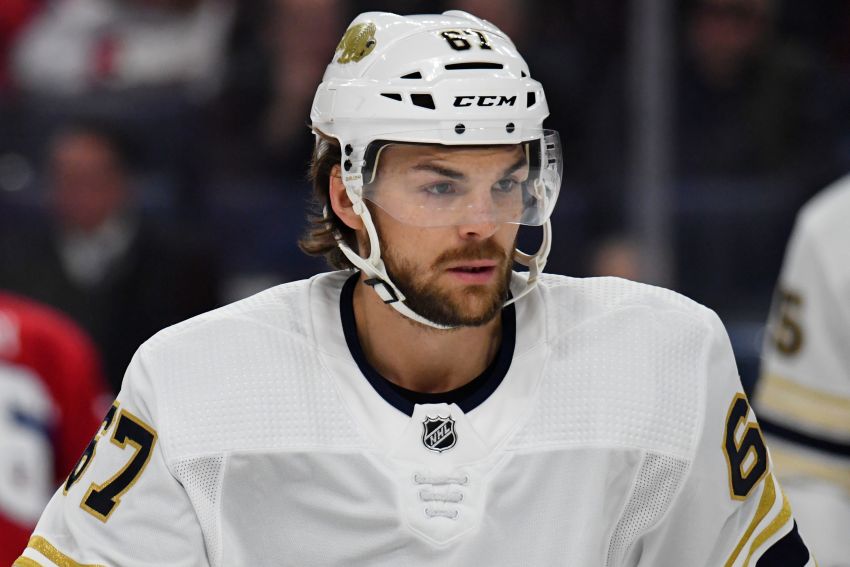 BUFFALO – Before winger Michael Frolik waived his no-trade clause to leave the Calgary Flames, he coveted the kind of opportunity the Sabres awarded him upon his arrival last month.

Frolik, 31, will be a free agent following the season. The Czech is playing for his future in the NHL. He needs ice time to showcase his talents.

Earlier this season in Calgary, he regularly skated fewer than 10 minutes a night and sat out four games as a healthy scratch.

“When you play eight minutes, it’s not much you can show off,” Frolik said Friday inside KeyBank Center. “I just want to kind of have a new opportunity for a start. That’s kind of why I came here. Obviously, the opportunity’s getting bigger.”

In his first eight outings with the Sabres, Frolik has enjoyed a notable role, mostly skating on the second line and killing penalties, an area he has helped improve. The veteran has played at least 12 minutes, 57 seconds in every game entering this afternoon’s home game

“I’m happy with that, for sure,” Frolik said of his role.

By now, having played for five teams over his 12-year career, Frolik knows what to expect when he switches uniforms.

“I know everybody, know all the faces, the names and everything,” said Frolik, who was acquired for a fourth-round pick Jan. 2. “Now it’s just a matter of time to perform on the ice. It was a quick transaction. I think I feel more comfortable, for sure. Now it’s just focus on hockey.”

Frolik, of course, believes he can contribute more. So far, he has scored just once, an empty-net-goal, and added an assist.

The Sabres’ reliance on captain Jack Eichel’s line and their lack of secondary scoring has become a huge problem.

“I want to play the right way and don’t think too much about the scoring,” he said. “But it’s a little bit in your head, too. You want to help the team, help the guys and get some experience.

“I know we got a young team here and strive to be an example for them on the ice and in the practices and stuff.”

Frolik understands he has a chance to prove his worth and extend his career.

During the Sabres’ bye and the NHL All-Star break almost two weeks ago, he brought his gear to his Florida home and found some ice at an old rink in Boca Raton.

The Sabres want Frolik’s habits to wear off on his new teammates. Having won the Stanley Cups with the Chicago Blackhawks in 2013, he’s one of the few players in the dressing room who has experienced any winning.

“He’s just a real solid character player who understands the game away from the puck and also understands what his team needs from him,” Sabres coach Ralph Krueger said. ‘I think that he has courage and … he’s a mentor kind of player.”

Frolik said the Blackhawks possessed “belief in the room we could win every game.”

Right now, the Sabres can’t string together a complete game. In Thursday’s 3-1 loss, the Sabres pounced on the Montreal Canadiens early before mustering little offense over the final 50 minutes.

“The issue here is just play a full 60 minutes,” Frolik said. “We’ve had a little trouble with the second period. It seems like we have always a pretty good first period, and then we kind of take our foot off the gas a little bit.”

Frolik said the Sabres, who are 10 points out of a playoff spot, need more urgency.

“It’s just you need to realize in the room this is the time for us, every game for us should be like kind of a playoff game,” Frolik said.

The chances of Frolik playing in the postseason this year are slim. He could waive his no-trade clause again. That, however, seems unlikely.

“I don’t want to be changing too much,” he said. “You never know, but I’m here and I’m happy to be a Buffalo Sabre.”

Frolik doesn’t want to get too far ahead of himself, but if an offer materializes from the Sabres, he said he would “definitely consider it.”

“I definitely want to stay in the league,” he said. “I still think I can play in this league. But you never know what will happen in the summer. I’ve been through that free agency. So I know it’s tricky and you kind of never know.”